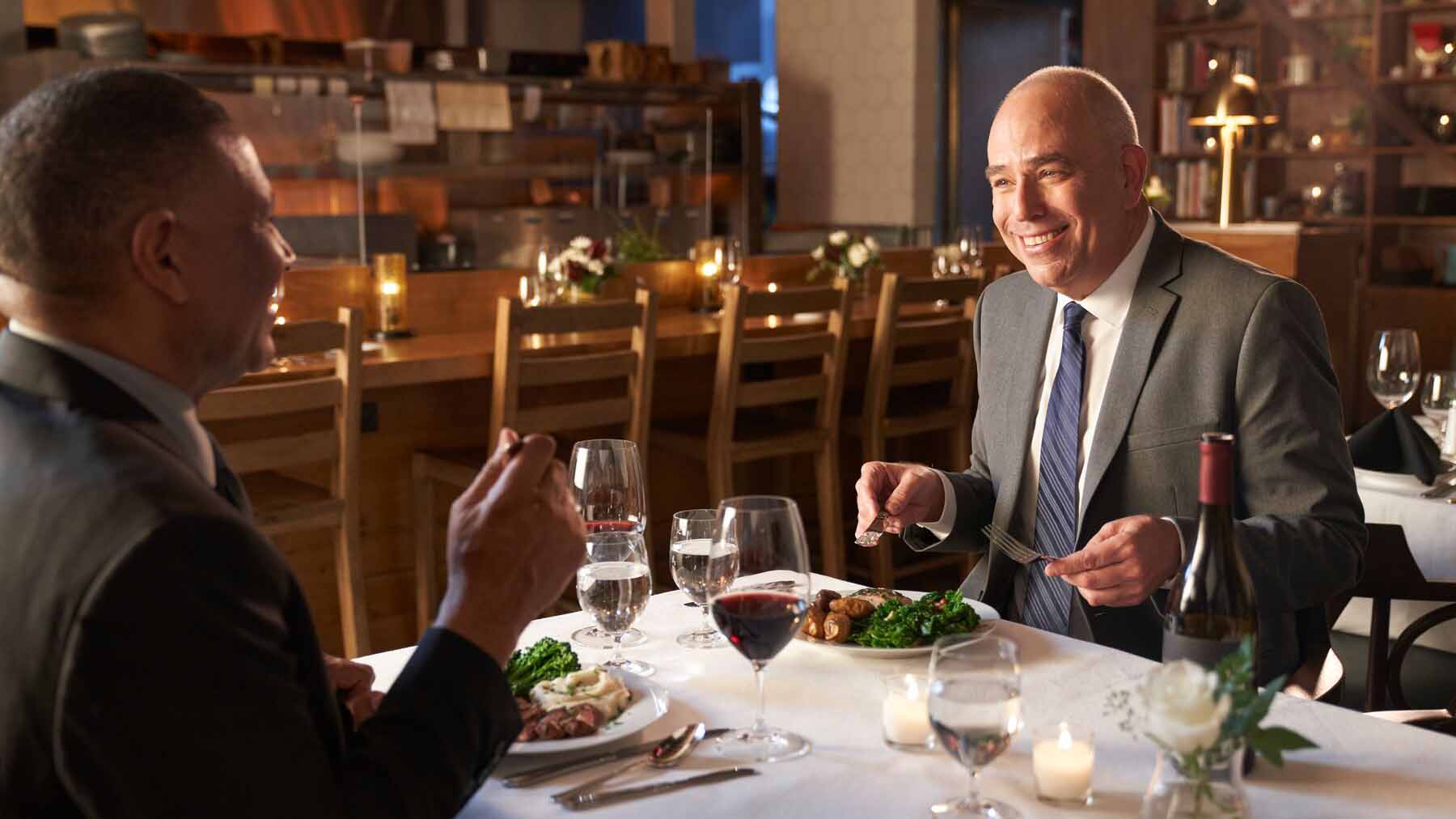 Neil achieved his goal and then some.
As told to Elizabeth Narins

*Neil, who is married to WW's CEO, lost weight on a prior program and continued on myWW™. People following the WW program can expect to lose 1-2 pounds/week.

I was bending over to tie my shoes a few years back when I stood up and realized: I was completely out of breath. At 6-foot 3-inches tall, I was active, but had been overweight for quite some time due to a diet made up largely of meat, potatoes, pasta, and bread. And in terms of serving sizes? Well, I was eating enough to stay heavy.

At first, I hemmed and hawed. But then I grew vaguely curious about the program that both Mindy and my daughter Lizzy, a WW member and Coach, have long evangelized: I slowly progressed to asking every so often, “So how many SmartPoints® are in this?” while gesturing to my plate. I even downloaded the WW app in 2017, but didn’t start poking around until December 2018. By the following March, I'd begun to follow the program. But it was in the fall of 2019, when I officially signed up to try out WW’s new program, myWW™ and chose Blue, which offers a moderate SmartPoints Budget and over 200 ZeroPoint™ foods, that I first input my starting weight and began to religiously track what I ate using the WW app.

The best thing about the WW app, I quickly realized, is that it forces you to focus on what you’re eating. Just paying attention helps you figure out what to eat in the first place—and that makes everything easier. Most importantly, from day one, I never felt like I was on a diet because I could eat what I wanted.

To that point, it’s worth noting that I eat the majority of my meals at restaurants. (I've only cooked one meal in my life: scrambled eggs.) On WW, I could continue to eat out for most meals. I just began to order differently:

Then: Coffee with milk, and either no breakfast or omelets or bagels with lox

Then: A variety of sushi rolls and sashimi with sake

Now: Yogurt or cottage cheese with fresh fruit and raisins

Then: Steak or veal Parmesan plus French fries, pasta, and/or bread and butter plus wine

Now: Seafood with spinach or broccolini plus a glass of wine or vodka

Then: Nuts and raisins plus tiramisu or tartufor (Italian ice cream) for dessert

Now: Nuts and raisins; chocolate for dessert (but only on occasion)

Having the app readily accessible on my phone was helpful since I could track what I ate in real time. Now, when I go to buy something like a protein bar, I use the app’s Barcode Scanner to look up its SmartPoints value, then ask myself, do I really want to spend 15% of my Daily SmartPoints Budget on this bar? When the answer is no, I put it back; the app empowers me to make smart decisions.

Exercise has also been key for me. Although I used to focus mainly on weight training, around the time I first joined WW, I began rowing 30 minutes—about 7,000 meters—a day in addition to weightlifting 3 to 4 hours a week and walking to and from work. Tracking my activity and rolling it over into extra SmartPoints has given me a lot of leeway to eat more without gaining weight.

While there have been days when I’ve eaten a lot more SmartPoints than I should have, I’ve never let it get out of hand: I just go back to making sure I stay within my SmartPoints Budget for the next couple of days.

Now I’m working toward another 7- or 8-pound weight loss to get back to what I weighed when I met Mindy in the 1980s. Don’t get me wrong—I don’t tend to be particularly self-absorbed when it comes to my looks. But now, when I actually pay attention, I’m not embarrassed. The better you look, I've realized, the better you feel, and the more you want to stay focused and follow the plan.

These days when I tie my shoes, it’s clear that I’m in much better shape. Although the concept of replacing my now-baggy wardrobe isn’t exactly exciting to me, getting my physical health together has been extraordinarily enjoyable. Now that I’m aware of what I’m eating, my diet is much healthier. My doctors were ecstatic to see how significantly my cholesterol has dropped. And as for my wife, my biggest cheerleader? She thinks I look really good.