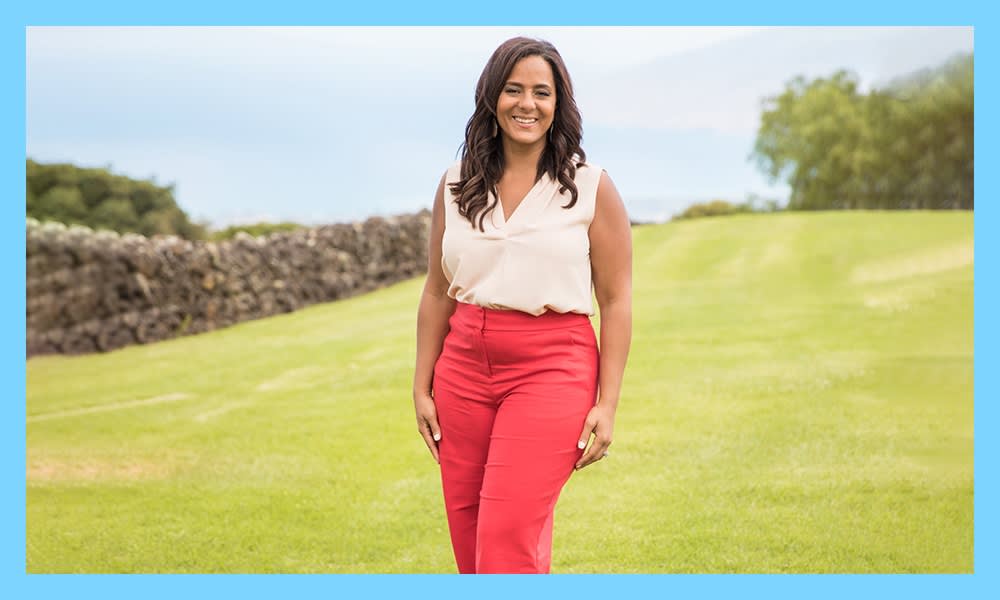 *People following the WW program can expect to lose 1-2 pounds/week.

Weight wasn’t a problem for me until about three years ago when I was dealt a hand I couldn’t actually handle: Between relocating my family of five to a house across town, mourning the death of a close friend, and wrapping my head around my oldest daughter’s high school graduation, I began stress-eating frozen foods like chicken wings and breaded chicken bites, which led to a 45-pound weight gain over eight months.

Although I was just 45 years old, I was also frustrated by hot flashes, night sweats, and sleeplessness, symptoms my primary care physician wrote off as early-onset menopause.

Lacking the energy to keep up with my son, who was 3 years old at the time, I felt terrible that my youngest child was stuck with a mom who was too tired to play outside, go to the park, or roll around on the floor—things I’d accomplished when my older daughters, who are currently 19 and 21, were toddlers.

After a bit of blood work, I found out that my blood sugar numbers were higher than normal and I had hypothyroidism, an underactive thyroid that can induce weight gain and fatigue.

My doctor put me on a medication to regulate my thyroid and another to regulate my blood sugar, then told me to cut out carbs, sugar, and alcohol to help prevent type 2 diabetes.

To launch my own defences, I decided to return to the workout routine I’d ditched after carrying my son. Four times a week, I’d drop him off at nursery school and head to the gym, where I’d use a machine similar to an elliptical for my cardio plus light weight lifting and planks.

Afterward, I’d feel so exhausted that I had to go home and nap.

Searching for a solution

Six months after beginning my fresh routine, my blood sugar and thyroid numbers remained the same and the scale hadn’t budged, so I chose to find a nurse practitioner for a second opinion. Over the year and a half that followed, she prescribed me eight different medications, including an estrogen cream to balance my hormones, a pill to boost my metabolism, and an injection to suppress my appetite.

I additionally did my own research and started taking several over-the-counter supplements like curcumin to reduce inflammation in my joints. I had a pill box so full that I couldn’t shut it, was spending $125 a month on medicine, and couldn’t even eat my favourite foods or have a glass of wine at dinner.

And yet? While my blood sugar wasn’t getting worse, I still had hot flashes, and I still wasn’t losing weight. After all, the diet my doctor prescribed me became so strict that sometimes I’d just give up and order pizza or Chinese takeout.

After 18 months, when I saw a photo of myself wearing my work uniform, my jaw dropped: I was so surprised by how large I appeared that I thought my dryer was shrinking my clothes. After confirming that the machine was functioning perfectly, I had to face the facts: My efforts weren’t paying off.

In August 2018, I saw a third practitioner who couldn’t get over how many medications I was taking. She took me off everything besides my thyroid medication and recommended WW. “Try it for a month, and then come see me,” she said.

As it happened, my insurance offered a health savings account incentive for joining WW, so I downloaded the app and dove in.

On my first day on the program, I ate all my go-to’s—like a granola bar, almonds, chicken thighs, and avocado—and tracked it all. But by the time noon rolled around, my daily SmartPoints® Budget was depleted, and I ended the day at 43 SmartPoints—20 above my goal.

Initially discouraged, I woke up the next day to find 23 new SmartPoints in my Budget. WW, I realized, doesn’t punish you for slip-ups—it’s a plan you can stick to.

After that, I began eating smaller portions and choosing foods that were lower in fat to stretch my Budget. Snacking on fruit instead of granola bars and swapping chicken thighs for breasts definitely helped.

What Yvonne Ate Then vs. Now

Then: A pea protein shake or granola bar

Now: Black coffee with a protein shake and a three-egg omelette with broccoli, onion, turkey, and salsa

Then: Baked chicken thighs and avocado with steamed broccoli

Then: Three or four slices of pizza or Chinese takeout like rice noodles and egg rolls

Now: A fish taco plate made with air-fried tilapia, cabbage, hot salsa, and non-fat Greek yogurt, or a quinoa-brown rice bowl with shrimp, black beans, and broccoli plus a glass of pinot grigio

Then: Veggie sticks, cheddar and caramel popcorn, or multigrain crackers

I also began to use my Fitbit to log activity on my WW app and earn FitPoints—an extra motivator!

About a month after I joined WW, I went back to visit my nurse practitioner. “You look happier,” she commented when she saw me. I’d lost about 7 pounds, but already bigger differences were occurring off the scale: Full of healthy foods from a variety of food groups, I felt way more energized throughout the day—no more naps after the gym for me!

Now that I feel as energetic as I did when my daughters were little, I take walks and jump on the trampoline with my now 6-year-old son, who loves using the WW app barcode scanner when we grocery shop together.

The program has also brought me closer to my second daughter, who joined WW after her freshman year of college. We share our favourite recipes and milestones, like her most recent non-scale victory: When she wears her favorite T-shirt, she tells me, she feels more confident because her back looks “smoother.”

On losing pounds and pills

In the past year, I’ve lost 29 pounds. Of course there were weeks when my weight stayed the same instead of going down, but instead of beating myself up, I’d reflect on how much better I felt. If I continue making healthy choices, I’d tell myself, I’ll set myself up for success in due time.

Although I still deal with hot flashes, my sleeplessness and night sweats have subsided now that menopause is behind me. I no longer need blood sugar medication, am taking a third of the thyroid medication that I was taking before I joined WW, and am off my hormone treatments—a major relief.

It helps that I don’t have to cut out major food groups to feel like myself. I’ve found a sense of balance in my lifestyle that I’d long been lacking, and I feel better than I have in years.

"I am motivated to keep up the momentum and I am grateful for all the support I have received from the WW community."