Tracy Hein: “Commit to being consistent, not perfect”

How Tracy lost over 54 lbs on WW while keeping diabetes in check.
Marie Clarke

Gone are the days of panicking about being seated in restaurant booths, being limited to two or three plus-size clothing stores, or needing Tylenol and a heating pad to treat excruciating back pain every night.

Seventeen months into her WW journey, Tracy has lost more than 54 pounds and is waking up with fewer aches and pains, and even riding a bike for the first time in 13 years! But her ultimate victory came just six months into her weight loss journey when she was able to purchase matching Christmas pyjamas for her family, an opportunity to create a precious memory that was previously out of reach.

“You always see pictures of families all wearing matching PJs. Ever since we had our daughter, who was a miracle baby that every medical professional said would never happen, we’ve been trying to soak up every little thing,” explains Tracy. “Last Christmas, I was down quite a bit and started wondering if I could find something to fit us. I wound up ordering matching PJs and sending mine back twice because they were too big!” 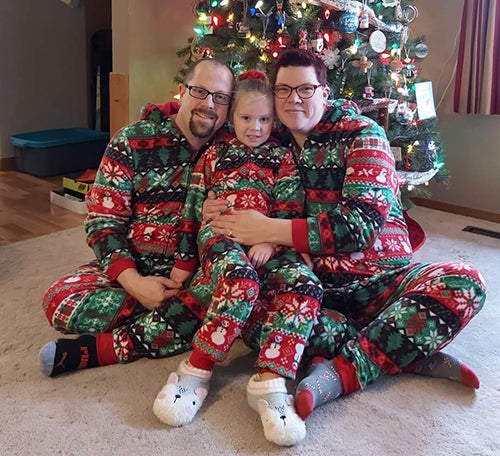 How it all began

In the fall of 2019, Tracy, who lives with diabetes, was diagnosed with fatty liver disease. Her doctor recommended she start on a weight loss program such as WW. But it wasn’t until more than six months later, after the first wave of the COVID pandemic, that Tracy finally got the motivation she needed to start her WW journey.

After building a play centre in their backyard, Tracy’s husband, Clayton, snapped a photo of the structure and inadvertently captured a side profile of her in the corner of the photo.

“The moment I saw that photo, I was like “We’re done. We start WW today,” Tracy recalls. “That was the breaking point. I knew I was big, but I didn’t realize how big I had gotten. I looked like I was carrying triplets in the ninth month of pregnancy.”

That same day, Tracy and Clayton signed up for dual digital membership with WW.

The road to success

Tracy is not new to WW. She’s been on the program a few different times but her recent journey has been the most successful.

“My mind is in a different place this time,” says Tracy. “Seventeen months in and I’m still opening my tracker every day. Another thing I’ve really found different this time is the community. They get you cause they’ve walked the same path or a very similar path.”

Tracy’s journey hasn’t been without a few bumps in the road. But even in challenging times, like this past summer when she gained 10 pounds while dealing with personal issues, she’s been able to appreciate how far she’s come on her journey.

“I’m proud of where I am now,” Tracy says as she reflects on that period in the summer. “If it had been five years ago, I would have gained back [the weight] and probably added an extra five pounds on top of that.”

Although Clayton started WW with Tracy, it’s been the support of the WW community that has been a game changer.

“He’s never going to know what it’s like to be a 350-pound woman because he’s never been that overweight. The most he’s ever had to lose is 30 or 40 pounds,” says Tracy. “If I didn’t have the [WW] community of people that I’m in touch with every single day, I really think I would have quit WW and stopped tracking.”

PersonalPoints tailored for those living with diabetes

Tracy was one of the first members to migrate over to WW’s diabetes-tailored PersonalPoints plan. The new plan is so personalized that it takes each member’s food preferences and diabetes into account and uses that information to build their individual ZeroPoint foods list. Foods that are higher in carbohydrates–like fruit, whole grains, and dairy– will not be on your ZeroPoint list if you’ve identified yourself as someone living with diabetes.

“I’m a huge fruit person. The biggest thing I’ve noticed is instead of every time I think I’m hungry reaching for a bowl of grapes, which are now like four Points, I make the effort to choose a veggie,” says Tracy.

In addition to saving Points by choosing vegetables over fruits, for each serving size of non-starchy veggies that is consumed, members add one PersonalPoint to their Budget, making this new program more liveable than ever.

“[PersonalPoints] is making me more conscious,” says Tracy. “I’m excited to see how the new program could affect my journey and my diabetes for the better!”

Tracy’s Day on a Plate

Sheet-Pan Chicken Fajitas with the Works