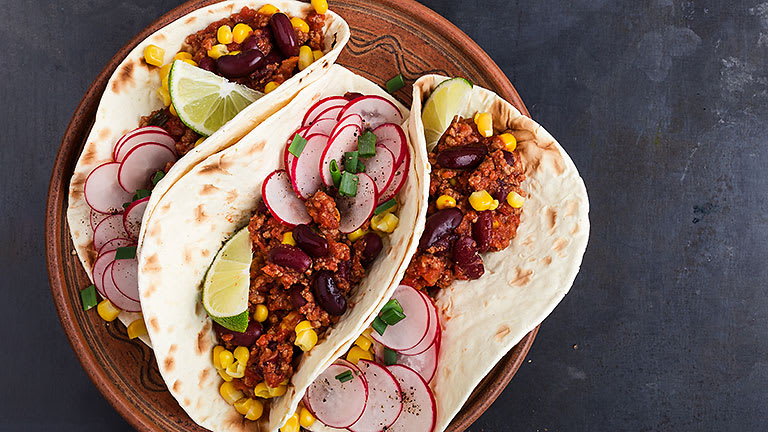 Learn how to enjoy a Mexican meal without going over your SmartPoints Budget.
By Jeffery Lindenmuth

Whether you're dining at an upscale Mexican restaurant or grabbing lunch at the taco truck, you can make smart choices to get a healthier and more satisfying meal. These tips will help.

When the chips are down
Fried tortilla chips are the greatest temptation at the Mexican table. Count on clocking in at 4 SmartPoints value for a dozen chips. One strategy: Take the amount of chips you’re comfortable with, put them on your plate and make that the limit. You could also ask for some sliced vegetables so you can dip them in salsa and guacamole instead of the chips.

Double, or triple, dip
Now that you’ve got your portion of chips, make 'em last. After putting a portion of salsa on your plate, take two scoops of salsa with the chip, but only eat the chip on the third scoop. You’ll cut your chip intake by two-thirds.

Keep the salsa
Salsa and pico de gallo (similar to salsa, but with less liquid) are two fantastic condiments, and both are usually free of SmartPoints values. If you are skipping cheese or sour cream, salsa can be a great addition to spoon on your main course.

Go fish
Ceviche is a great appetizer, packed with protein and flavor. A half-cup is just 2 SmartPoints value, while the protein-rich fish gets your meal started right, satisfying your hunger.

Know your tortillas
Choose a corn tortilla over flour, and go for soft over hard. Corn is a whole grain, while a flour tortilla is all refined grain with no nutritional value, like eating a pretzel. Both corn and flour soft tortillas have about 2 to 3 SmartPoints value, but the corn will be a more nutritious choice.

Lime: It’s not just for Corona
Trimming an ounce of cheese from your entrée can eliminate up to 4 SmartPoints value. Ditto for sour cream (1 SmartPoints value per tablespoon). But what can help make up for the loss of flavor? That little green wedge on your plate. A squeeze of lime does a beautiful thing for Mexican dishes. Ask for a side of lime wedges and you won’t miss the fatty toppings.

Take a side adventure
Refried beans and rice aren’t the only side-dishes at Mexican restaurants. So get adventurous. Try sliced jicama root. It's crunchy and refreshing, and it has 0 SmartPoints value on its own. Nopalitos are another great choice. These cactus paddles are high in fiber and vitamins, and have only the fat they're cooked with, so a serving might contain just 1 SmartPoints value. If you must have bean, go for whole pinto beans or black beans in place of refried. This will cut the SmartPoints values for a serving by half.

Need a Margarita?
The flagship cocktail of Mexico, real margaritas are a refreshing blend of lime juice, sweet triple sec and tequila. But this cocktail will cost you at least 17 SmartPoints value, and that’s assuming your glass isn't large enough to house several goldfish. As an alternative, order a Paloma. This authentic cocktail is tequila topped with Squirt, a grapefruit soda, and is only 9 SmartPoints value.

Cerveza, por favor
With typical beers (like Corona) clocking in at 3 to 5 SmartPoints value, beer can add a lot of baggage when you’re trying to beat the heat of Mexican cuisine. Tip: Grab one and add a water on the side. You'll likely be satisfied after drinking one or two, and less tempted to keep ordering round after round with your meal.

Let’s walk through some of the typical dishes you’ll find in many authentic Mexican restaurants. Some may seem unfamiliar, but that’s likely because you’re better acquainted with the Tex-Mex version than the real dish that inspired it.

Ancho Pepper: A dried Poblano chile, ancho has a mild, sweet flavor rather than actual heat.

Chayote: This versatile, green Mexican fruit (similar to squash) can be cooked as a side, or found diced on salads or even as dessert.

Horchata: In the U.S., horcahata is usually a chilled drink made with rice and spice. It has a slight grainy texture, slight sweetness and a flavor reminiscent of rice pudding.

Huitlacoche: Sometimes referred to as the “Mexican truffle” (as in the mushroom) this fungus grows on corn plants and has an earthy, savory flavor that makes it a delicacy.

Jicama: This crunchy, refreshing root vegetable is often sliced and enjoyed raw. It adds crunch and flavor to salads, salsas and other dishes.

Mole: While it’s used synonymously with mole poblano, the red-brown sauce of chili peppers and chocolate, Mexican mole actually includes a family of sauces in colors of black, red and green.

Nopales: The flat leaves of the prickly pear cactus, these are prepared as nopalitos.

Pepitas: These roasted pumpkin seeds often appear as a flavor-and-texture enhancer on salads and other dishes.

Queso fresco: Literally “fresh cheese,” this delicate white cheese is a great choice, with only 3 SmartPoints values per ounce, compared to 4 for common north-of-the-border substitutions like Monterey Jack or cheddar.

Tamales: A popular staple, tamales are made from a mix of ground corn and shortening, and then cooked to a firm, doughy consistency in a corn husk. They are often filled with small bits of chicken or pork, and sauce.

Tomatillo: This tart, acidic fruit looks like a small tomato in a paper husk and forms the foundation for Mexican verdes, or green sauces.