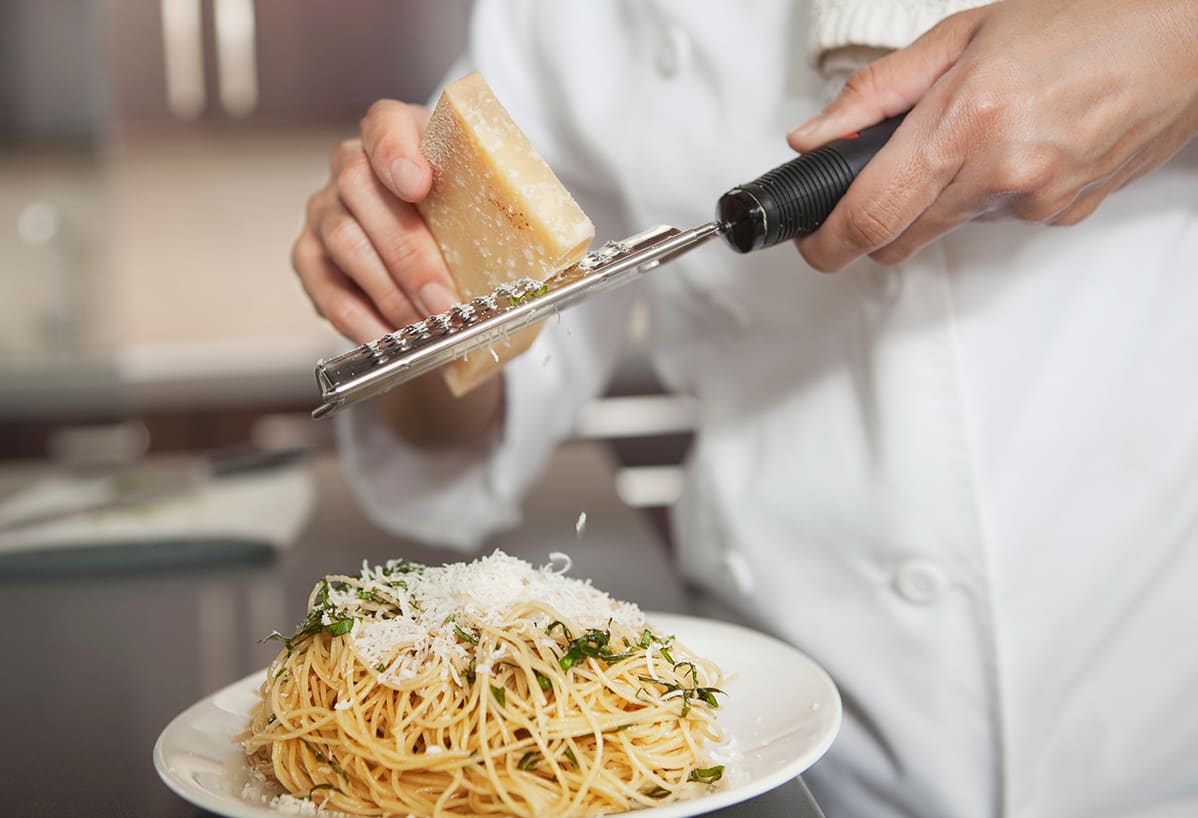 Let’s Go Out for…Italian: What to Eat

Whether you’re at the local pizza parlor or a white-napkin establishment with a famous chef, here’s how to mangia bene.
By Jeffrey Lindenmuth

The tips below will let you lighten up your favorite dishes while keeping them hearty and tasty. Here’s to relishing real Italian, while toasting “Salute” — to health!

Tomato/marinara
About 3 SmartPoints value per half cup
Simple tomato sauce (known as salsa al pomodoro in southern Italy, or marinara in the United States) is usually the best choice. Adding meat (making it a Bolognese), fish or cheese can double the SmartPoints value.

Vodka sauce
About 5 SmartPoints value per half cup
This is really just marinara sauce with heavy cream, butter and vodka, but people think of it as its own variety.

Alfredo
About 14 SmartPoints value per half cup
Made with heavy cream, butter and Parmesan cheese, the nefarious Alfredo sauce is your worst choice If you love Alfredo sauce, try to balance the fat by choosing a dish with vegetables or protein, like pasta primavera with chicken.

Pesto sauce
About 19 SmartPoints value per half cup
This Northern Italian sauce is made with olive oil, pine nuts, garlic, basil and Parmesan cheese. While it can be highly fattening, the strong flavor will let you use much less of it than you would marinara sauce. You might drizzle 4 tablespoons (for 9 SmartPoints value) on a dish of pasta.

Menu Decoder Al Dente: It literally means “to the teeth,” but this term means you want your pasta firm in the center (not overcooked). “There’s no need to ask for this — you can assume it will be cooked this way in a quality Italian restaurant,” says Brandwein.

Carbonara: A hearty meal of pasta in bacon or pork fat, with eggs and cheese. It can pack 16 SmartPoints value per cup.

Gnocchi: These Italian dumplings are made with potato or, sometimes, cheese. One cup of potato gnocchi has 7 SmartPoints value per cup; cheese kicks it up to 17.

Mozzarella di bufala — Cheese made from the milk of domestic water buffalo is higher in protein, fat and minerals than cow’s milk mozzarella, and has about 4 SmartPoints value per ounce.

Polenta: A creamy porridge made of ground cornmeal. "Be aware it may be loaded with cheese or cream," says Dobbins. Plain Polenta has about 7 SmartPoints value per cup.

Zabaglione: An egg, liquor and sugar sauce that often dresses desserts or fruit. It packs about 7 SmartPoints value per half cup.