A discussion about how food bonds communities, bridges cultures, and helps the world evolve into a better place.
By Melanie Mannarino

Marcus Samuelsson believes in the power of food and community. “Food is a window into other cultures. ‘Who are you? I want to join you on your journey,’” says the chef and owner of New York City’s Red Rooster Harlem and Ginny’s Supper Club, among other eateries, and host of PBS’s new show No Passport Required­. “It’s wonderful and delicious to invite someone over and tell your story through food.”

And Samuelsson’s got quite the story. Born in Ethiopia, he was adopted and grew up in Sweden, where he learned to cook with his Swedish grandmother. But he was also heavily influenced by the flavors and cooking techniques of his biological father’s family. Here in the states, he’s rolled those influences and others into his own individual style, showcased at his New York restaurants and establishments as far-flung as London, Bermuda, and Chicago. Here, he shares a little of his story—and his food.

​Samuelsson: I come from a family where cooking was a central part of spending time together. My grandma cooked for us after school, and we had to help out. I got interested by eating real food at home, and making home-cooked food every day. And getting a real sense that it takes a certain collaborative effort to make it happen.

How does your background, drawing on Swedish and Ethiopian traditions, influence your approach to cooking?

​Samuelsson: There is a lot in Swedish food—the minimalistic design and clean flavors—that speaks to me. Then there’s the warmth of Ethiopian stews and spices—both sides help me develop my unique style of cooking, and there is a time and place for both. For breaking a fast with friends and family, Ethiopian food is fantastic. For simple preparation of seafood, Swedish is the style you want.

Are there common themes? Are there things each cuisine could learn from the other?

Samuelsson: Both are driven by nature: Sweden is surrounded by water, lakes, and rivers, and most food we think of as Swedish is seafood. Ethiopia has heat, and is high up in the mountains. We think of spice blends, vegetarian cooking. Both are remote places, and nature is the connection, the terroir.

How would you describe the food you serve at Red Rooster Harlem, and how does the restaurant fit into the community around it?

​Samuelsson: Red Rooster wouldn’t be Red Rooster without Harlem’s amazing community. It shows in our food, hospitality, music, and art. The food is rooted in the cooking of the great migration, of African Americans coming north and bringing their food with them. It’s influenced by me being an immigrant, and Harlem being filled with immigrants. The restaurant is all about America, then and now.

Opening Red Rooster was one of the biggest experiences of my life. Getting acceptance and support from our community is everything. Artists supported us, local jazz musicians came right away. Not just to dine with us, but also to guide us, in terms of how to make it right for Harlem.

And Ginny’s Supper Club? Was the vision the same, or different?

How important is it to you to stay true to a cuisine?

​Samuelsson: As a chef, I am curious and have to evolve. And part of that is to cook the way the world operates around you. When I started cooking, it was about getting the best ingredients, no matter when, or from where. Today we talk about delicious food—but also inclusion and seasonality. And we are better for it. 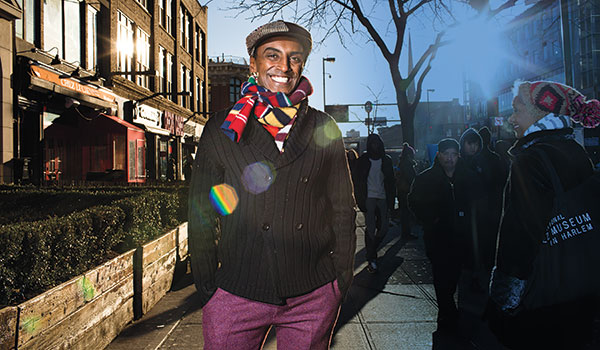 How much do you think about health and nutrition when you cook?

​Samuelsson: Health and nutrition are part of everything we do. Even if I want to fry something, I consider how to simmer it beforehand, so I can fry it quicker. How can I use a lighter bread crumb and egg white? We don’t compromise on delicious, but there are different ways to get there.

Our customers are diverse, and it’s our job as a restaurant to meet them where they are in this moment.

Tell us about cooking for former President Obama when he was in the White House.

​Samuelsson: It was an amazing opportunity, and I was so excited to cook for him and the First Lady, at a state dinner honoring Prime Minister Singh of India and his wife. I was inspired by American and Indian food and culture, so I served basmati rice, gulf shrimp in a light curry sauce, corn bread—and used ingredients from Michelle Obama’s garden. It was a meal that celebrated both America and India.

Tell us about the Harlem EatUp! event you’ve been involved in for the past four years.

Samuelsson: In general, we learn about communities through festivals, through the arts. The Harlem EatUp! festival was created with idea of inspiring people to come to Harlem for the cultural experience and putting Harlem top of mind as a great food destination. It’s a way of saying to other communities, “We are here, come to us through food.” The festival was largely free—and that wouldn’t work without having great partners like WW there. It makes it a much more democratic event. Great food doesn’t happen just to rich people.

How does it feel to be involved in that?

​Samuelsson: This year we had thousands of people from 30 states and seven countries participate. That always gives me a hunger to do more.

You and your wife founded the Three Goats Organization—what does that group do?

Samuelsson: Three Goats is an area between Somalia and Ethiopia that essentially belongs to no one, but there are people living there. And in many areas like that, the most vulnerable people are often young girls. My wife and I wanted to focus on giving them access to clean water, healthy food, and education. Things every girl should have, no matter her religion or tribe.

It’s so important to us that, thanks to the Three Goats Organization and our many volunteers, 200 girls at a time now have access to clean water and nutrition, and can attend school. These are huge numbers—in four years we’ve been able to provide for thousands of young girls.