Skip to main contentSkip to footer
Join now
Join now
Food
Canadian Treats Made Healthier
Canada’s culinary contributions haven’t necessarily been what we’d call healthy, but with a few tweaks you can still enjoy them guilt-free.
By Andrea Sarjeant, CNP

Bake sale butter tarts and Nanaimo bars. Indulging in roadside poutine or a beaver tail. Those telltale red ketchup chip fingers. That sweet drizzle of maple syrup. A peameal bacon sandwich at St. Lawrence Market. These are all Canadian food moments worth celebrating this Canada Day.

Unfortunately they can all take a pretty toll on your SmartPoints® budget too. Luckily, with a little bit of switching and swapping, you can still enjoy these classic Canadian treats and stick to your healthy eating plans.

Here`s how to cut down the cost of some Canadian favourites:

Peameal bacon
Ok, so we may be the only people who call it this (the rest of the world refers to it as Canadian bacon). Naturally healthier than regular bacon, peameal is a brined, boneless pork loin. To save yourself some SmartPoints do away with the sandwich bread and fillings and enjoy the bacon on its own. Marinate it in some mustard, plus a touch of maple syrup and grill it on the BBQ. 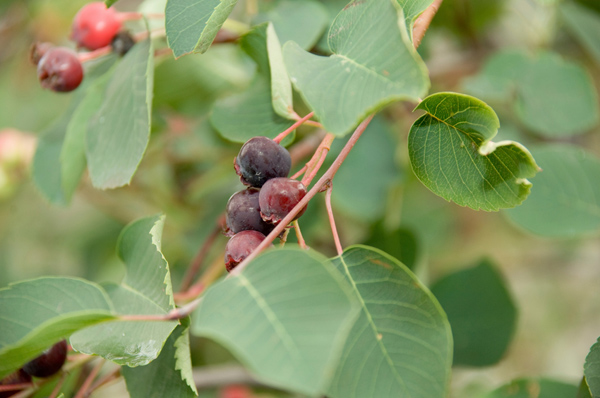 Saskatoon berries
The city of Saskatoon was named after this very special berry, a staple of the region. If you’ve never tried a Saskatoon berry, you are missing out; although they look like blueberries, Saskatoon berries are more closely related to apples and have more in common with almonds when it comes to taste. If you’re lucky enough to get your hands on some Saskatoon berries, you could try your hand at a pie or crumble, or just enjoy their unique taste as-is, by eating them directly from the bush or bowl for a 0 SmartPoints treat. 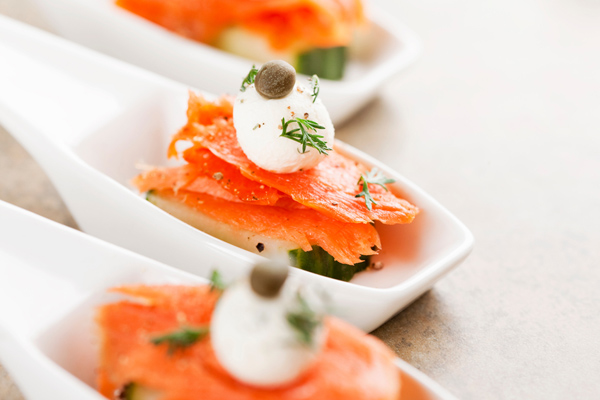 Smoked salmon
In Canada, our abundance of coastline means that we have beautiful fish. One popular Canadian preparation is smoked fish, especially smoked salmon. First it’s cured in much the same way that gravlax (or lox) is. Then, for a truly Canadian preparation, the cured salmon is either cold smoked (à la Nova Scotia) or hot smoked (à la British Columbia). The resulting fish is sweet, salty and smoky perfection. To keep this meal on the healthier side, pass on the bagels (stay strong!) and keep your cream cheese in check. Enjoy your smoked salmon stacked on cucumber slices with a little dollop of yogurt or cream cheese, fresh dill and cracked black pepper or on its own with a little lemon and capers. 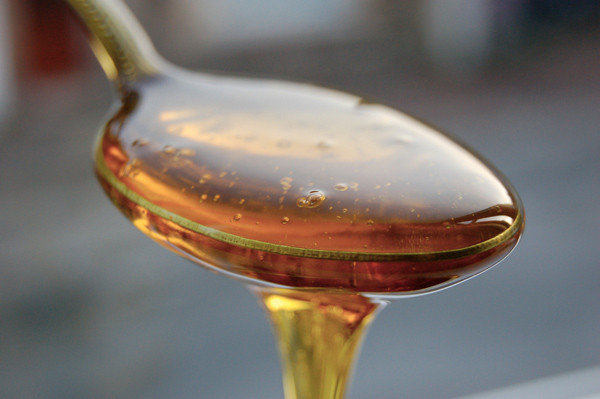 Maple syrup
First produced by First Nations communities, maple syrup has become the quintessential Canadian sweetener. Canada produces 80% of the world’s supply of pure maple syrup. Instead of buying a light syrup, seek out a number three dark syrup instead, which is higher in minerals, lower in sugar and, best of all, has the most “maple” taste. 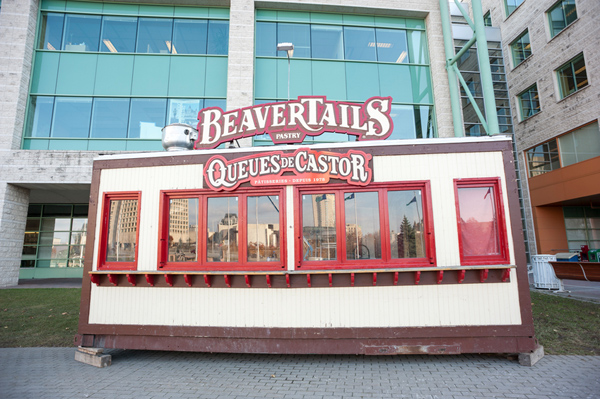 Beaver tails
Invented in Ottawa in the 1980s, these fried dough concoctions are shaped like beaver tails and are often topped with whipped cream, cinnamon sugar, and sometimes even chili and hot dogs (?!). Eating a traditional beaver tail will likely take up your entire daily SmartPoints budget, so why not try making these Rideau Canal Twists, which come in at 5 SmartPoints per serving? 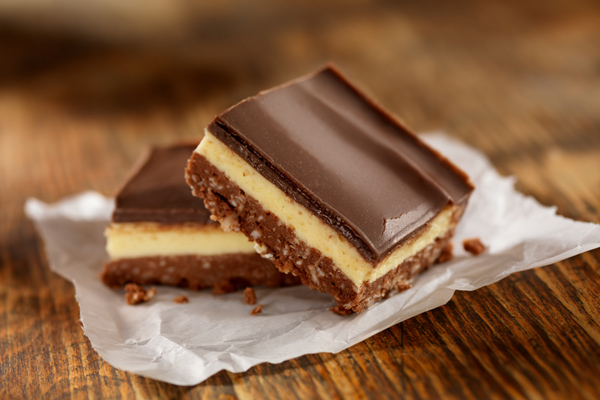 Nanaimo bars
Named after the city of Nanaimo on Vancouver Island, these super sweet, no-bake bars date back to the 1950s. According to the City of Nanaimo, a classic Nanaimo bar is made with the following ingredients: butter, sugar, cocoa, graham wafers, almond and coconut base, a butter, cream, icing sugar and custard powder centre, and a butter and chocolate topping. If Nanaimo bars had a slogan, it would surely be: Causing sugar highs at bake sales since the 1950s. Although some recipes for more whole food versions of Nanaimo bars exist, these recipes will not shave much off of your SmartPoints budget. Generally, a Nanaimo bar will cost you anywhere from 6 to 14 SmartPoints. Since Nanaimo bars are so sweet, why not cut them in smaller pieces? Or try this interesting take on a Nanaimo bar, at 8 SmartPoints per serving. 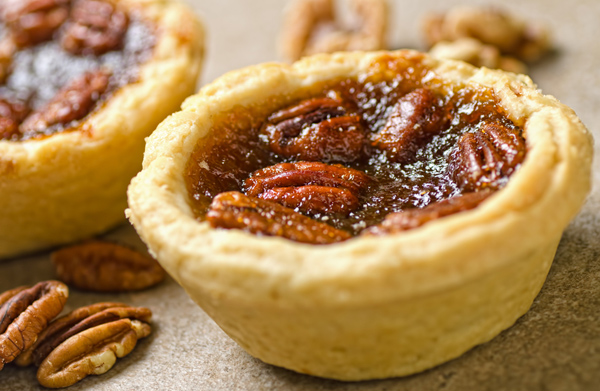 Butter tarts
Butter tarts are made with two SmartPoints-hogging ingredients: butter and sugar. So let’s face it, there isn’t much that can be done to make these guys healthier. A typical homemade butter tart with raisins will cost you around 17 SmartPoints, or you could try this recipe, with only 8 SmartPoints per serving. 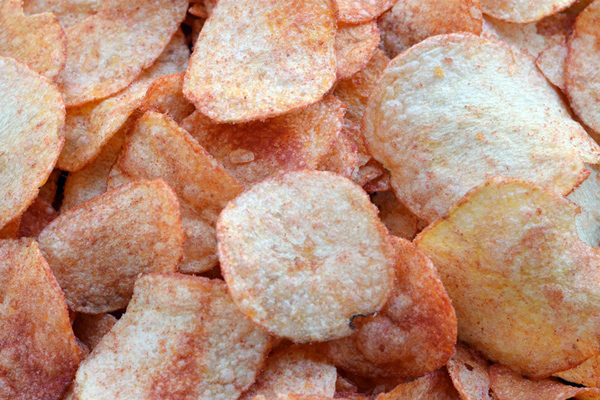 Ketchup chips
Arguably the “most Canadian” of all the potato chips, ketchup chips are not sold south of the border. Avoid bingeing on a bag (and the telltale red fingers) by making ketchup kale chips instead: combine torn, washed kale with tomato paste, a dash of apple cider vinegar, sliced garlic, a pinch of sea salt and a dash of stevia if needed. Mix with your hands and bake at 250 F until crispy. 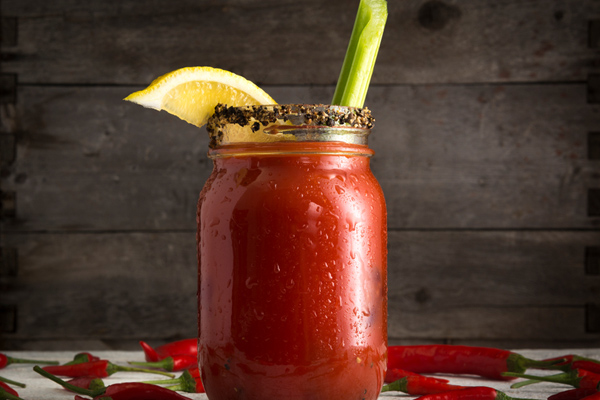 The Caesar
Created by an Italian restaurant in Calgary, Alberta in 1969, the bloody Caesar may be the official drink of Canada. It’s sometimes referred to as “that clam drink” by Americans… and we wonder why the idea never really caught on south of the border! (In the author’s humble opinion, the Caesar is far superior to the Bloody Mary.) One Caesar will set you back 7 SmartPoints. Limit yourself to just one and go easy on the vodka to spare a few SmartPoints. Don’t forget to add in extra celery garnishes for optimal nutrition when sipping. 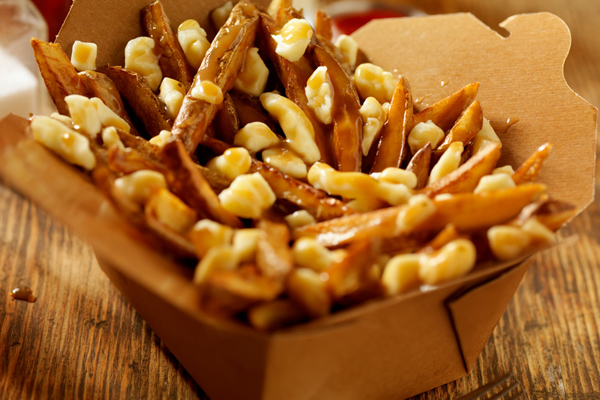 ​Poutine
There is really nothing that you can do to lighten up the traditional French Canadian dish of French fries, cheese curds and gravy. But Fresh, one of Toronto’s best-known vegetarian eateries, tries – by combining sweet potato fries with steamed kale and a mushroom gravy. At least they up the ante (and nutrients) of this traditional dish. Try it yourself! Or enjoy a small portion of the original – but please don’t say sorry!