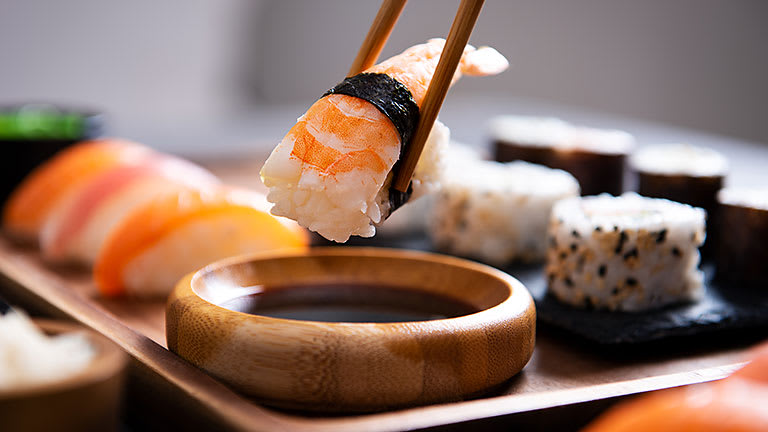 Recommendations and PersonalPoints Guide for Japanese and Sushi Restaurants

Use our guide to have the perfect, PersonalPoints™-friendly meal at your favorite Japanese spot.
By Jeffery Lindenmuth

Compared to many restaurant cuisines, sushi has few pitfalls. When they do appear, most are glaringly obvious, like crispy tempura dripping with oil. Here’s how to be true to the tradition, and your goals.

Avoid “spicy”
When you see “spicy” on a sushi roll, it’s code for mayonnaise laced with hot sauce or chili oil. This orange sauce may be drizzled across the top of the roll or hidden inside. Either way, it can add about 4 PersonalPoints values to the meal. Plus, the spicy rolls with chopped-up fish are where the restaurant disposes of less desirable cuts.

Eat your vegetables
Whether you adore the flavor of raw fish or are still getting used to the idea, it's worth remembering that sushi also includes vegetarian rolls such as avocado rolls (one serving is about 8 PersonalPoints) and cucumber rolls (about 3 PersonalPoints).

Spell crab with a “K”
Most imitation crab (or “krab”) in the United States is composed of 50-percent-or-more Alaskan pollack, making it a fairly sustainable choice of seafood. With additions of egg white, oil, salt, starch, and spice, it’s clearly a processed food and not as beneficial as raw tuna or salmon. However, for many diners, the cooked consistency, lower price, and modest calories of surimi sticks make them the perfect core for a California roll, which typically have a few PersonalPoints in each.

Go brown
Sushi rolls and nigiri sushi rely on rice to fill you up. Most sushi bars now offer brown rice as an option. You’ll get all the fiber and B vitamins you're missing with white rice, and you’ll feel full quicker. On some plans, brown rice is a ZeroPoint™ food.

Watch the hibachi
But don’t order from it. They have that squirt bottle of oil, and often use more than necessary because it makes it easier to cook and improves the display.

Clear your sinuses
In addition to soy sauce, nigiri sushi and sushi rolls are usually served with pickled ginger and wasabi, a green horseradish paste. The lemony heat of ginger and the fiery rush of the horseradish act as contrasts to the delicate sushi and serve to clear your palate. Purists refrain from adding wasabi to their sushi, preferring to leave it in the hands of the sushi chef, but if you crave the rush, both of these bold flavors pack about 1 PersonalPoint value.

According to Shuji Hiyakawa, executive chef for Philadelphia-area Kome restaurant and a protégé of Iron Chef Masaharu Morimoto, the beauty of sushi lies in the simplicity of preparation. “Nigiri sushi is just seaweed, rice and fish. There is no fat, just a focus on freshness,” he says.

That’s great news for health-conscious diners, according to Diane Henderiks, RD, personal chef and culinary nutritionist at DishWithDiane.com. “With sushi, there are very few surprises. There are rarely sauces or oil that have hidden calories, so what you see on your plate is what you are getting,” she says.

*Given that ingredients, cooking methods and portion sizes can vary greatly among restaurants, all PersonalPoints values for restaurant dishes are estimates.

What are the best choices?
When it comes to sushi, preferences vary widely. When you add the nutritional and environmental implications, sushi dining becomes a very personal choice. Here are some quick pointers to help you make the most informed choices.

Salmon (left) earns big points for being as likeable as lox. And it has bountiful omega-3 fatty acids, known to boost heart health. Mackerel (center) is nutritionally similar and considered a good pick for sustainability. With their sweet flavor, scallops (right) are a great choice, especially when farm-raised. They offer a hearty dose of omega-3s, Vitamin B12, magnesium and potassium. Other similar picks: arctic char, sablefish, aka black cod.

These picks lack the omega-3 potency of the Best Picks, but are still good choices. Shrimp (left) offer pure protein with little risk of mercury and other heavy metals. Ebi are always cooked, so this sushi is similar to shrimp cocktail. Giant clam (center) is similar in taste and texture to conch, yet more sustainable than that long-lived snail. White tuna (right) is usually albacore tuna. Other similar picks: squid, cuttlefish

As you might have guessed, some of the most delicious fish are also the most controversial choices, in terms of both health and sustainability. Bluefin tuna (left) is the prime example, for the reasons mentioned in "Know Your Tuna.” Environmentalists also frown upon eating fresh water eel (center), or unagi, which is diminishing in the wild. Hirame, which includes fluke (right), halibut and sole, all have issues of sustainability. Other

At just 4 PersonalPoints per roll, this likable California roll (left) is one of the safest choices, delivering the benefits of lean protein from surimi, omega-3s from avocado, and a tasty topping of flavorful sesame seeds or fish roe. The cucumber roll (right), has among the lowest PersonalPoints values on the menu, with 3 PersonalPoints value. These low-cal vegetarian rolls make a good follow-up to sashimi for a filling meal.

These rolls include poorer cuts of high-quality whole fish, which is why you're better off enjoying these fish varieties as nigiri sushi instead (not rolls). Sushi gives you more fish and less rice, which cuts the PersonalPoints value. Instead of having the shrimp roll, you could enjoy more shrimp by ordering shrimp sushi. Standbys like tuna roll (right) have 3 PersonalPoints. Other similar picks: salmon roll, Yellowtail roll.

The shrimp tempura roll (left) isn’t even a Japanese creation. One roll equals 500 calories and about 10 PersonalPoints. Made with deep fried softshell crab, the spider roll (right) is fast-food in disguise, with 11 PersonalPoints. Other similar picks: A Philadelphia roll (salmon with cream cheese) delivers similarly high PersonalPoints value thanks to sweet and fatty additions.