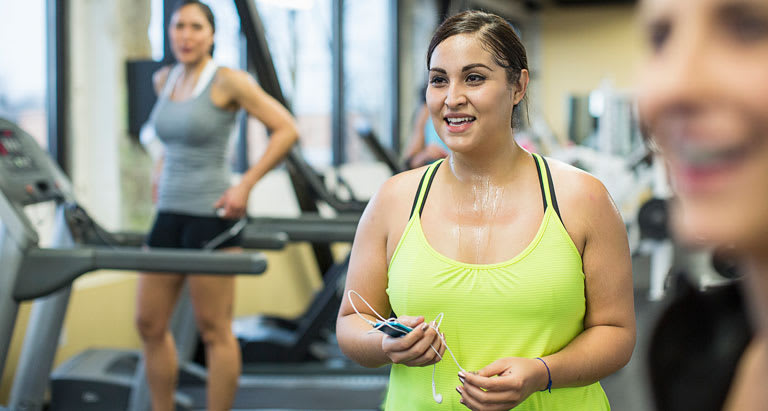 Hint: It can make you stronger
By Cassie Shortsleeve

We all know that place—the one where we feel totally relaxed and confident, like we can tackle anything the world throws our way. It’s called the comfort zone.

“Our comfort zone describes a circumstance in which we feel relatively low levels of distress or discomfort and in which the risks that we are taking are minimal to none,” explains Katie A. Rickel, PhD, a clinical psychologist in Durham, NC.

In 1908, psychologists Robert Yerkes and John Dodson demonstrated that—in mice at least—being in such a zone predicted a steady and consistent level of behavior.

We like being in this space. “Much like we all have a preference for a room to be at a certain temperature, it’s as if we have an emotional thermostat as well that we instinctively try to keep static,” says Laura Nufire, MSW, the clinical director at the residential weight-loss center Structure House. “When we’re young, we experiment with different ways of approaching life, but there can be a tendency to get a little more routinized and rigid as we get older.”

But smooth sailing can also mean getting stuck in a too-rigid routine, which can lead us to miss out on some of the “magic” that happens when we try something new, Rickel explains. “There is an entire body of research that demonstrates that we actually do not reach our full potential in any behavior or activity if we remain within the comfort zone,” she says.

Of course, there’s a sweet spot when it comes to stepping out of your comfort zone, notes Nufire. “It very much mimics what a trainer might tell you about exercise: ‘Push enough that it’s challenging, but not so much that it hurts.’ The same is true with emotional strength-training, so to speak.”

The idea is to allow yourself to be a novice and get through the discomfort as you learn mastery, she adds. Learning a new skill—taking an art class or engaging in a new form of physical activity—is a good first step.

Plus, once you do it once, overcoming your fears only gets easier, Nufire says. Then, you’ll start to reap the following benefits:

Leaving a fixed state of mind behind can open your mind to new ways of thinking, notes Nufire. Small changes such as putting on your left shoe first if you always put your right one on first get your neurons firing a little differently, she notes.

Research out of the University of Texas at Dallas finds that stretching yourself by engaging in new activities (such as photography or learning to work a sewing machine) that challenge the brain enhance memory function later in life.

Branching out also usually means meeting new people. If you’re shy by nature, make conversation about the shared environment. “The easy thing is to avoid conversation, but that also means missing out on some potentially great connections,” Nufire says.

The easiest way to increase your self-esteem? “Watch yourself experience success,” Rickel says. After all, our beliefs inform our behaviors. Say you believe you’re a bad cook but then you prep a yummy meal (with rave reviews from your family). You might rethink that original belief. “If we never tested our abilities, we would have no opportunities to show ourselves that we might be capable of more than we believed ourselves to be,” she says.

Plus, believing you can succeed is an important aspect of actually accomplishing goals (and setting new ones). “Goals are critical to long-term success, whether it's for weight loss, learning a new skill, or changing a behavior,” Nufire says.

You’ll fail (and grow from it).

Of course, trying something new doesn’t always lead to the results we want. But failure is just as important. “It is in these situations that we often learn about what we need to do to improve our future chances of success,” Nufire says. Keep trying. If you persist with a new set of skills or a new approach, you’ll experience facing (and overcoming) a challenge. “This can be even more confidence-boosting than if we had never faced the failure in the first place,” Rickel says.

You’ll be able to handle anything.

“It can be tempting to pretend that life is controllable, but sometimes it definitely isn’t,” says Nufire. However, having the experience of consciously stepping out of your comfort zone under your belt allows you to experience discomfort (and even fear) in a somewhat more controlled way, she notes. “This can make it easier to then manage things when life throws unexpected curve balls.”