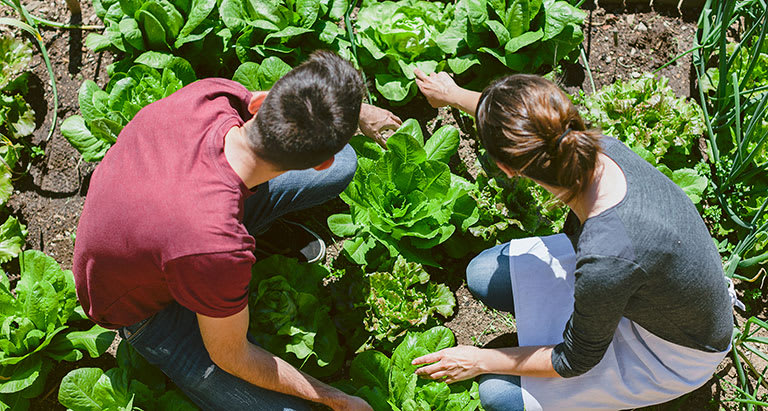 How to Promote Healthy Eating at College

Stressful late-night study sessions, boozy frat parties and hectic schedules are a rite of college passage — all of which inevitably lead straight to notoriously high-fat convenience foods. But now university administrators want to declare the infamous freshman 15 a thing of the past, and they're revamping cafeterias in an effort to improve students' bodies and minds.

"Food and academics are all tied together," says Steven Miller, Senior Executive Chef for Cornell's dining program. "You need to eat the right foods to provide energy, to apply your mind to your studies."

Today's college cafeterias are moving way beyond pizza and meatloaf. With varying palates, diets, and allergies, co-eds' dietary needs are more diverse than ever. And universities are listening.

RELATED: 7 Secrets to Fighting the Freshman 15


Berea College in Kentucky is bringing new meaning to the term "eating locally." With more than 400 acres of farmland, the College's agriculture program provides much of the produce for the dining halls that feed more than 1,300 undergrads each day. In fact, it's mostly students that carry out the day-to-day farming operations.

"Nationwide, colleges are seeing that students want more healthy and local options," says David McHargue, Director of Food Services at Barea, "and they want their voices heard." He says the importance of eating local foods has grown past the point of being a "trend" and doesn't seem to be slowing down. "We expect to spend between $150,000 and $175,000 this year on local foods. When I started in 2005 that number was about $2,000."


Today, most schools are trying to reach students in as many places as possible. This not only means the usual posters hanging in the dining halls themselves, but also communication online through social media including Facebook, Twitter, and Tumblr.

Binghamton University's NourishU is one such program. Events and menu changes are posted online, while coupons and daily deals are often tweeted. The New York State university also sponsors events like health fairs, healthy cooking demos, and dining hall tours throughout the year.

"The best way to reach students is through direct interaction," says Binghamton's dietician Alexa Schmidt. "That way they're engaged and aware of what they're eating." The university recently placed second in the National Association of College & University Food Services most innovative nutrition program contest.


Some Universities are doing more than just offering healthy options, they're also giving back. Schools like Columbia University and American University have partnered with Table for Two USA, which adds a 25-cent surcharge to one of the dining hall's existing healthier, low-calorie meals (which are flagged by a Table for Two wrapper on pre-made items, or a placard next to a steam table item). The company then uses that extra money—and, in effect, the extra calories—to provide meals to hungry children in Uganda, Rwanda, and Ethiopia. The idea is twofold: to end obesity in developed countries and end hunger in underdeveloped ones.