Family, friends, and faith helped this 30-something fight for her life when a cyst turned out to be a tumor.


*People following the WW program can expect to lose 1-2 pounds/week. Nicole lost weight on a prior program and is continuing on myWW™. Watch her journey of gaining strength through her support system in the video below.

In Nicole’s words:
Last year — just two months after my 30th birthday — I was in the shower when I felt a lump in my left breast. Thinking it was likely just a cyst, I made an appointment for a few weeks later. When I saw the doctor, she immediately ordered an ultrasound and a biopsy. A week after I had those, she sent me to the hospital for additional tests, which included three mammograms and another biopsy. The diagnosis: stage 2 breast cancer that had spread to my lymph nodes.


A life-changing choice
Before I could even catch my breath, I had an agonizing choice to make. Breast cancer doesn’t necessarily affect reproductive health, but chemotherapy does, so I had to decide whether to freeze my eggs before starting treatment. I already have a daughter, Ava, now 3, and the egg freezing is not just time-consuming, but also involves taking hormones (which I figured was the last thing I needed right then), so I passed on the procedure, opting to leave the matter to fate. This meant my treatment could begin right away: chemotherapy, then a lumpectomy, and then radiation.

Incredible support
Naturally, my mind was reeling. What would happen to Ava if I didn’t survive? Would she recognize me when I lost my hair? What if I couldn’t have more children? But my “Three Fs” got me through: family, friends, and faith. My cousin Connie started a Facebook group called “Nicole Strong.” She made pink bracelets, posted constant updates about my progress, and helped plan a comedy benefit to raise money for my whole family (I lost my job while going through treatment).

An act of love
My boyfriend was the man I needed him to be, taking care of our family and making sure I focused on my health. He showed me so many acts of kindness, but one in particular touches my heart: When I began wearing a scarf in public to cover my thinning hair, I felt like everyone was staring at me (even if they weren’t). After I lost all my hair, he started wearing a turban scarf, too. That way, he said, I wouldn’t be alone in feeling stared at! 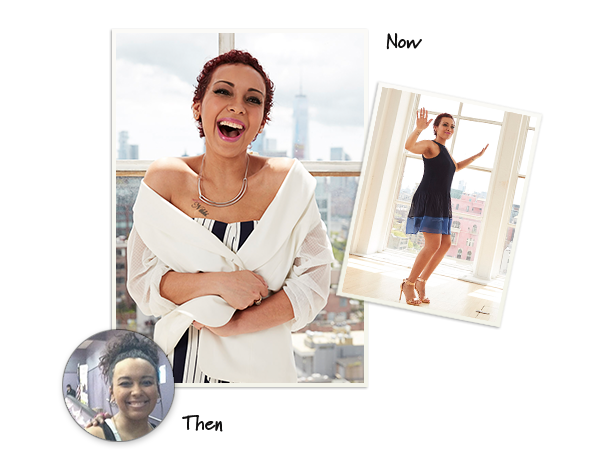 How Nicole’s success with WW has improved her life


My journey
I was a WW Lifetime member when I was diagnosed, and I credit the program for my being alive today. What if I’d still carried around those 61 pounds? Would I have been able to feel the lump? What if it had metastasized to a huge tumor? I am a survivor because WW had already instilled healthy habits in me. More than two years later, I’m able to give back to my family and be a source of hope and strength to other women. I’m proof that you can bounce back. I believe the best is yet to come, and I want everyone around me to know it.

Get checked now
One bright spot in this terrible situation was that the people around me started showing more initiative with their own health. I urged everyone I knew to get annual checkups, to take precautions, to follow up when something doesn’t feel right. I want to set an example for my daughter, to emphasize the importance of being healthy. When she’s older, I’ll show her the photos from this time, so she understands what I went through. I pray that nothing like this ever happens to her, but if it does, I hope she can have the same positive attitude that I’ve had.