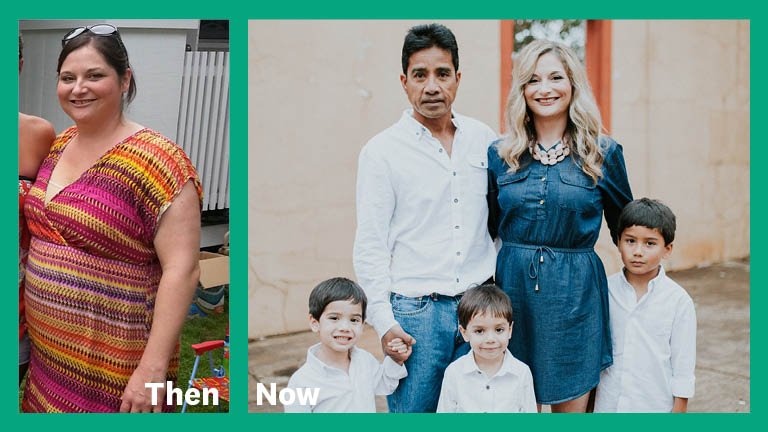 *People following the WW program can expect to lose 1-2 pounds/week. Jennifer lost weight on prior program and myWW and is continuing on myWW+.

Almost three years ago, when my husband and I decided to move back to my hometown in South Carolina, I felt incredibly self-conscious: I’d been living in Hawaii since graduating from college, and over the course of 13 years, I’d gotten married, delivered three sons, and gained about 60 pounds.

The weight began to accumulate in my early 20s. I’d bartend, go out drinking with my friends, and sleep until noon the next day. While you can easily find fresh pineapple and mango in Hawaii, the food there can be surprisingly heavy, and I found myself resorting to popular Hawaiian meals made of up of canned Spam and fatty pork.

After I met my husband and began having kids, I worked dayshifts at a local bank while my husband took on evening shifts at a restaurant. Without childcare, our lifestyle was built around convenience: I’d grab fast food on the way to work, where I’d eat donuts or pastries, then get home and cook frozen food for the boys at night. When my husband would bring meals home after work, I’d eat salads with goat cheese, candied pecans, and tons of dressing, plus chicken parmesan and pasta, too.

About six months after we arrived in South Carolina, I was at my parents’ house when I found a photo of myself that was taken when I was in high school.

Although I’d weighed much less back then, I remembered feeling huge as I posed for the camera that day.

Looking down at myself years later, I found myself wishing I had the body I’d hated throughout my teenage years. The perspective broke my heart. I said to myself, “If I ever get back to that weight, I’m going to be kind to myself.” A week later, I signed up for WW.

RELATED: All about myWW+

Because my three boys were all under the age of 5 at the time, it was hard for me to get to WW Workshops. Knowing my schedule wasn’t going to free up anytime soon, I joined WW as a Digital member and downloaded the WW App, where I’d scroll through Connect, the members-only social media network, for inspiration.

Early on, I found @lisa_allison, a Connect member who would post her then-and-now transformation photos each week. Although she was still working toward her goal weight, her progress made me think, “If she can do it, I can, too.”

That said, I didn’t make huge changes right away. The first week I switched from regular cheesy crackers to reduced-fat. I began tracking my food, which helped me pay more attention to food portions, and I stopped snacking on my kids’ leftovers. At the end of my first week, when I stepped on my home scale I saw that these small tweaks had delivered: I’d lost 6 pounds*—more than the typical one- to two-pounds per week weight loss I’d expected.

Then, during my second week on the program, I started incorporating more ZeroPoint® foods like fruits and vegetables into my meals and snacks. I wasn’t as diligent about tracking, but I still thought I’d have a big loss. I maintained my weight loss that week; that result on the scale made me realize that I needed to follow the healthy habits outlined in the program. From that third week forward, I weighed, measured, and tracked my food, and the weight came off consistently.

Unwilling to give up the meals I loved, I found healthier ways to prepare them. For instance, I learned to swap out butter for olive oil spray and discovered that turkey bacon tasted just as good as the real deal.

While I found so many creative cooking tips on Connect, the one I truly embraced involved replacing ground beef with ground turkey. I’d make turkey strogonoff with spaghetti, turkey burgers instead of hamburgers, turkey meatloaf, and tacos with ground turkey instead of ground beef. My kids ate everything I cooked—they couldn’t tell the difference!

What Jennifer ate then vs. now

Before WW, I wasn’t active at all: I’d sit behind a desk for eight hours a day. When we moved and I joined WW, I started walking on the treadmill at the gym. Then, when I hit my goal weight, about 10 months after I started, I was looking for an activity I could do at home while the kids were napping and found yoga videos on YouTube. When I first tried them, certain poses like malasana, a low squat, felt so painful that I had to modify the moves.

After three months, I found myself moving through flows seamlessly. Today, I can do side planks, squats, tree pose, and child’s pose, all very easily. Now that my kids are in school, I take hot yoga classes at a nearby studio four to five times per week. During class, I feel so strong and empowered, and after, a sense of calm and peace comes over me. 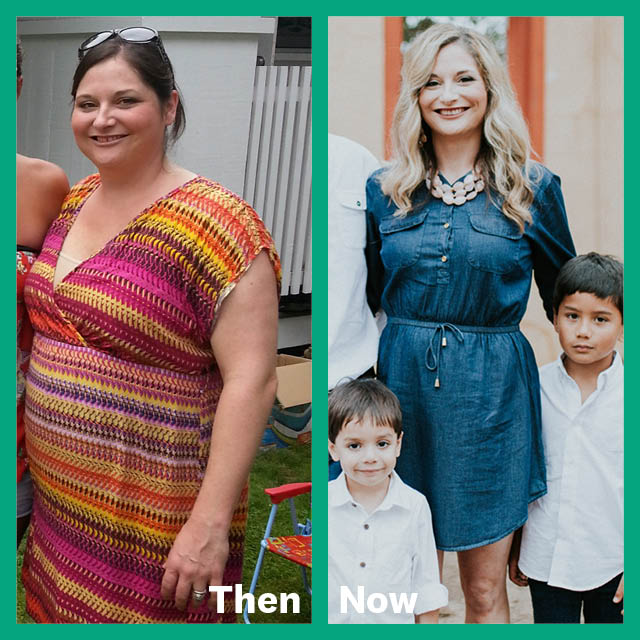 After about five months on the program, my friends and family started noticing my success. But it wasn’t until the 10-month mark on the program that I reached my original goal: I weighed exactly what I did in high school.

Since then, I’ve lost 10 more pounds* and achieved much more than a healthy weight for my frame: I’ve developed the confidence that I can do anything.