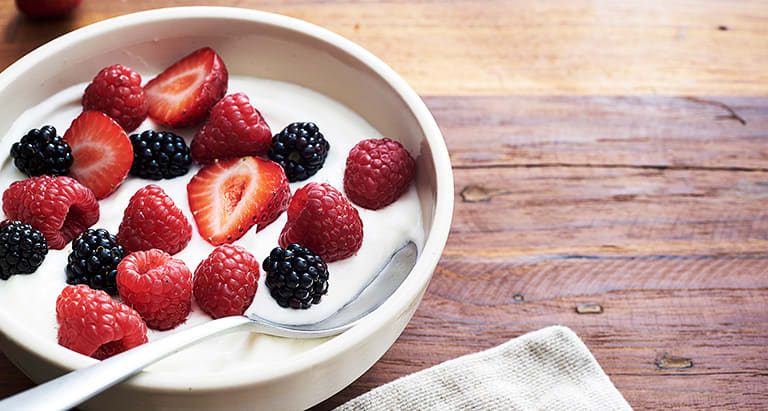 Our nutrition team answers your questions.

Yogurt is versatile, delicious, and, when it’s unsweetened and nonfat, a smoothly satisfying ZeroPoint™.


How do I know if a dairy product is a ZeroPoint food or not?

The following ARE ZeroPoint foods:

The following are NOT ZeroPoint foods:


Why is nonfat milk not included? It has a similar nutrition profile to nonfat unsweetened yogurt.


Research shows that liquids don’t promote the same feeling of fullness as solid foods do.1  When you drink something, it eliminates the act of chewing which may impact the signals between the belly and brain.2  This means that the smoothie or juice you’re drinking may not promote the same amount of fullness between meals as eating the fruit might. Therefore, we require beverages be tracked while nonfat unsweetened yogurt can be 0.


If I add honey or other sweeteners to nonfat yogurt, is it still a ZeroPoint food?


No. Yogurts that are sold with sweetener or flavoring can be easier to overeat. That’s why they’re not designated as a ZeroPoint food, and why we recommend you track them.

If you add ingredients to it like honey, granola, nuts, or dried fruit to nonfat yogurt, you should track those ingredients. If you add ZeroPoint ingredients, that yogurt would still be a ZeroPoint food.


Why are other lowfat dairy options (like skim milk and cottage cheese) ZeroPoint foods?


Science shows that liquids don’t promote the same feeling of fullness as solid foods do. Therefore, a drink like skim milk still has a SmartPoints® value. Other low-fat dairy options like cottage cheese are not included on the ZeroPoint food list because they’re higher in calories and saturated fat than 99% fat-free plain yogurt, and are also more prone to be overeaten.


If ice, nonfat unsweetened yogurt, and fruit are blended into a smoothie, would it be considered a ZeroPoint food?


No. Liquids, including smoothies, do not promote the same feeling of fullness as solid foods do therefore all ingredients would be counted.