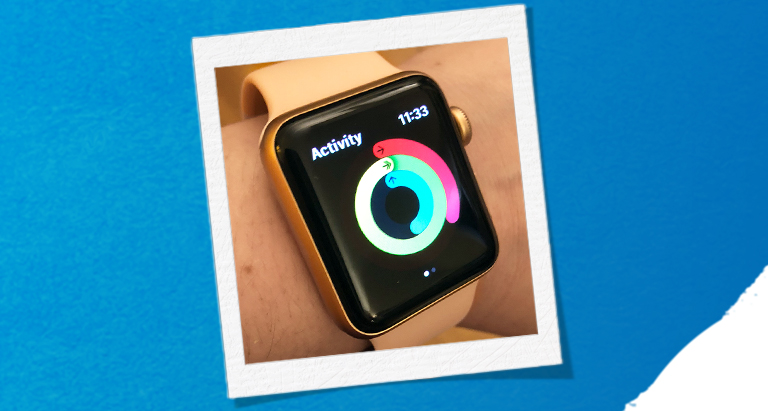 Finding time to work out or get in extra activity and movement hadn’t been my top priority. I wanted to exercise, but never-ending deadlines made getting to the gym fall to the wayside.

Then I got an Apple Watch which tracks my activity, and I was a little stunned. I hadn’t realized just how little movement I actually do on certain days. Seeing my results was like a slap in the face.

The watch has three circles, and the goal is to close them all. One measures movement (you set how many calories you want to burn in the day), one is exercise (mine is set to 30 minutes, but if I do more, I can watch the circle wrap around itself), and one is standing (it wants you to stand and move for at least 1 minute every hour for 12 hours out of the day.)

I wasn’t sure I’d like the watch. I was hesitant, but I’ve become a little obsessed with it—and all because of the activity tracker. I hate seeing the circles open, so in the past couple of weeks moving around has become a major priority for me. It’s almost like a game—one that I’m determined to win (and one that has a lot more benefits than hours playing Candy Crush).

Now, I know this may not last. I had a FitBit and was gung ho when I got that, too, but when it started going on the fritz, I stopped using it.

But I’ve been having a lot of fun trying to increase my activity.

I get little reminders. If I haven’t stood up at all in the hour (which happens more than it should), it vibrates and sends me a message. The strange thing for me? I actually listen! While at the office, I’ve gotten up and wandered around the building, at home, I have gotten off the couch and started running in place, and so on.

I’ve had a little rowing machine sitting in my apartment for years. Before the watch, I couldn’t even remember the last time I used it—but in the past week, I’ve tripled the amount of time I’ve spent on that thing—all because I wanted to close my movement ring.

There’s even reminders to stop and take deep breaths.

The watch is pricey (mine was a present, I don’t know that I would have gotten it on my own), but there are plenty of ways to get the same benefits without the steep cost:

1. Find a sale! It doesn’t have to be an Apple Watch. There are a lot of reasonably priced trackers available. Some of the ones I’ve seen cost less than a meal out, but last a lot longer. While I have enjoyed closing the rings, that doesn’t have to be the goal. You can set a step amount, and strive for that every day—something that is doable but also a reach. And most of the trackers have an app you can use, too, so you can see your totals without having to pull out a pen and paper.

2. Set an alarm. I like the hourly reminders to stand up and move! But you don’t need a tracker to get that. Any old timer will do. Set it to go off every hour, and when you hear it, get up and move! (And, a couple of times a day, after the moving, you can do a minute of deep breathing too!)

3. Accountability partners. One of the great things about Weight Watchers is that we’re in this together, there’s plenty of people who are going through the same things we are, and can help motivate us. For my movement goals, I share my status with my boyfriend, as extra motivation. It helps spur me along. The other night I realized I was close to closing my one of my rings. I didn’t want to admit it (I was pretty sure he had closed his), so I got up and danced around my apartment for about three songs until I hit my goal—and I was super excited to share my news.

Some people don’t need the extra motivation to get up and go, but for me, the tracker has been making me move—which is a huge plus in my book! I’ll take whatever help I can get!

Do you use a tracker? If so, do you find it useful? You can find me on Connect @shani!