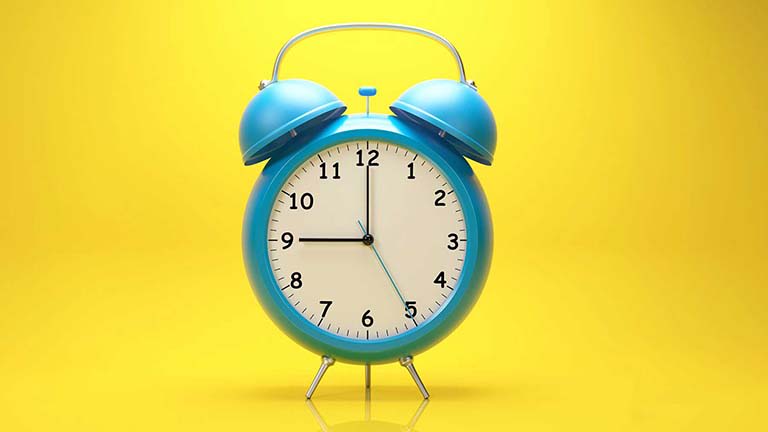 Tick tock: don't let the clock stress you out

You may not be able to conjure up an extra hour, but you can feel better about the 24 hours in a day.

What time is it? Time to check the clock...again. Cue instant stress.

How often do you check the time? You don’t have to be having fun for time to fly by: it seems to race past us no matter what we’re doing. The consensus: we often feel like we have too much to do and not nearly enough hours in the day to do it.

This is especially the case for people who are juggling multiple responsibilities (which is basically everyone). According to a 2015 study in the Journal of Marketing Research, people feel pressed for time when they have two goals that seem to conflict with each other, for example, wanting to eat dinner with the kids, but needing to work late to finish a project.

“Stressing about our personal goals manifests itself as a sense of having less time,” says Jennifer Aaker, PhD, a behavioural psychologist at Stanford University and one of the authors of the study.

Problem is, all that stress is interfering with your ability to, well, get things done. Here are five ways to manage with the pressure, and start feeling good about everything you do accomplish.

And another. And another. Breathing deeply can lower your anxiety levels and give you “a more expansive view of time,” says Aaker. In the study, people who were told to inhale and exhale 11 times reported less anxiety than those who simply counted to 11.

Another idea: take a 10-minute breather. In our “time-is-money” society, it can seem almost indulgent to spend those valuable minutes on yourself. But carving out some time to relax isn’t a “loss”. In fact, it actually makes you more productive in the short-term, says Linda Sapadin, PhD, a psychologist in New York and author of How to Beat Procrastination in the Digital Age. “Often, the best time to take a few moments to relax is precisely when you believe you don’t have the time for it,” she says.

Let’s face it: not every responsibility requires the same amount of effort. But for the detail-oriented, doing even relatively simple tasks, like firing off an email to an old friend, can balloon into big ordeals, says Sapadin. “You make a small undertaking into a stressful situation, and then you feel overwhelmed,” she says. “To change your pattern, simply respond with a few quick sentences. And get the task off your plate. It’s done! Good for you.”

3. Channel your anxiety into excitement

Let’s say you’re hosting Sunday dinner. Instead of fixating on the menu and the cleaning, focus on the idea of spending time with your friends and family. It worked for the people in Aaker’s study: the ones who reframed their anxiety as excitement were less likely to feel pressed for time than their still-frazzled counterparts.

Sure, you might want to learn Italian, or take up sailing, or write a novel, but let’s be honest: that’s not going to happen overnight. (Or, sorry, probably not even this year.) Why not? “Because thoughts come quickly, but doing them takes time and effort,” says Sapadin.

You don’t have to give up on your dreams, of course. Just don’t let the bigger goals overshadow the little tasks that need to be done today. Sapadin suggests this line of thought: ‘It would be great if I did this [longer-term project], but right now, what I want/need to finish is this.’

5. Tally up everything you have done

Chances are, you’re more productive than you think. “At the end of the day, it’s really important for people to review not only what they accomplished, but what they enjoyed,” says Sapadin. Picking up the kids from school, cooking breakfast in the morning, having a long-overdue conversation with a friend: these are all things that you can be proud of accomplishing.

As for the rest of the items on your to-do list? Oftentimes, they can wait: “Realise that some things might not get done,” says Sapadin. “But then, not everything needs to get done.”