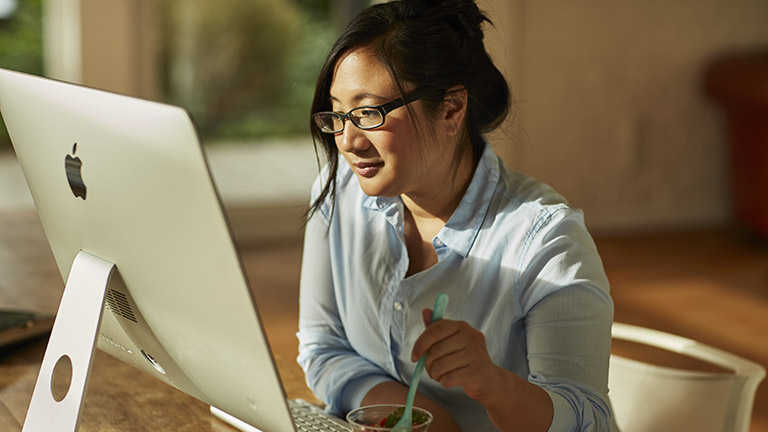 Can screens make you sad?

Screens can affect your mood. Here’s what you need to know to keep your wellness in check.

Fact: we live our lives surrounded by screens. With smartphones, tablets, laptops and TVs readily available both at home and work, it's little wonder research analysed by University College London found that nearly a quarter of the British population spend over 10 hours a day looking at a screen.

Spending most of our day in the digital world has become a normal part of daily life. What isn't so normal, however, is that too much screen use may affect our emotional wellbeing, and has been associated with anxiety and depression, says Brian Primack, MD, PhD, Director of the Center for Research on Media, Technology, and Health at the University of Pittsburgh.

The last thing anyone needs is an unexpected derailment that makes it difficult to maintain a can-do attitude while trying to lose weight or make healthy choices. With this in mind, here are the facts about screens and wellbeing, and some gentle advice that could help beat those screentime blues.


Social media use appears to be the main culprit, primarily because it skews our perception of reality, says Dr. Primack, whose research focuses on adults, specifically those aged 19 to 32. “They don’t realize how heavily those things are curated and how careful people are to demonstrate only the most positive things that happen to them,” he says.

“In comparison, the rest of us can sort of feel inadequate. So, what that means is spending more time in that milieu can be related to more depressive or self-esteem issues.”

Both the total amount of time spent on social media and the frequency—how often you check your accounts—have been associated with an increase in depression and anxiety. Another problem: the more social media platforms used (think Facebook, Twitter, Instagram, Snapchat, Reddit, etc.), the greater the chance for depression, anxiety, and other negative emotional outcomes.

RELATED: Why friends are good for you

RELATED: How to create a sleep-friendly bedroom

If you must use screens before bed, Dr. Phelps suggests using special amber-lensed glasses. These glasses have been found to block the blue light that decreases the production of melatonin, a hormone produced by your body that’s associated with falling and staying asleep. Unfortunately, says Dr. Phelps, they work only in about 50 percent of people. For others, consider blocking the blue light directly on your devices using an app like Night Filter or Twilight, or software like f.lux.

RELATED: The health benefits of sleep

How to do a digital detox: your 7-step plan

How to boost your motivation with social media

Get back to nature