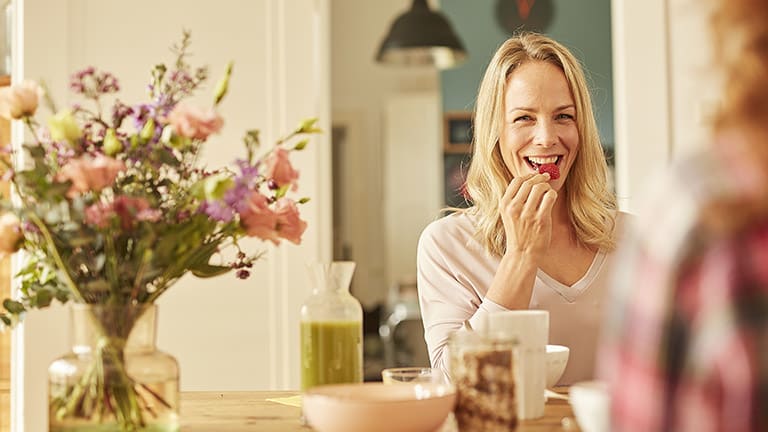 Does a square of chocolate a day keep the doctor away?

How do you shake off the blues and shift your mindset to a happier place? It’s easy to fall back on food, for example a chocolate bar, for an instant ‘feel good’ feeling.

So does this mean that food can change how we’re feeling, and even function as a mood booster? And if so, how long does the effect last? Expert WW nutritionist Ray reveals all.

The relationship between mood and food has become a hot topic, with more and more experts now recognising that certain foods can play a crucial role in elevating our mood.

However, it’s important to remember that the food-mood connection is extremely complex, and there are huge gaps in research relating to how food can influence how we feel.

Nevertheless, while concrete answers are lacking, there is some evidence that points to a link between food and mood. We’ll start with the question on everyone’s lips…

Does eating chocolate make you happy?

Chocolate lovers, rejoice – science confirms that chocolate can influence our happiness! Eating chocolate releases several neurotransmitters, so-called ‘bliss-chemicals’ that have a positive effect on our feelings.

These include phenylethylamine (which causes alertness and a degree of excitement), serotonin (a well-known general mood lifter) and endorphins (known to decrease levels of both stress and pain). Furthermore, there is scientific evidence to suggest that chocolate can improve mood and cognition1.

However, next time you’re feeling a bit down or have a chocolate craving, try to eat mindfully. Choose a square or two of dark chocolate that contains 70% or more cocoa, rather than milk or white chocolate2.

A higher percentage of cocoa equates to a higher content of flavanols (naturally occurring compounds present in many foods), which can have a positive effect on our mood.3,4,5

Do you ever experience an overwhelming craving for chocolate, or something sweet? Craving something sugary isn’t uncommon, especially when you’re feeling tired or sad.

Whether you’re experiencing a dip in your blood sugar levels from skipping breakfast or you’re having a bad day, sugary foods provide a temporary blood sugar spike, which boosts your mood.

However, it’s important to point out that this increase in mood is short-lived – sugar is a ‘quick fix’ that won’t have a lasting effect.

RELATED: How to find hidden sugar

When indulging in a bar of chocolate, for example, the sugar is quickly released into the bloodstream, but it doesn’t stay there for very long.

In fact, it’s used up quickly as energy, resulting in a drop in blood sugar levels (sometimes to lower levels than you started off with).

The good news is, you can help stabilise your mood by maintaining steady blood sugar levels throughout the day.

One way to do this is to source snacks which release sugar more slowly into the bloodstream, so you don’t experience spikes and crashes.

Nutritionally speaking, a piece of fruit such as a banana, or a slice of wholemeal bread is a good choice. These foods will raise your blood sugar for a longer period, thereby elevating your mood for longer too.

Feed your mood – can these foods make you feel happier?

We’re all aware that a healthy, balanced diet can help with weight management and reduce the risk of disease, such as heart disease and diabetes.

RELATED: 10 ways to reduce your risk of developing diabetes type 2

But did you know that an unhealthy diet is also a risk factor for depression? A growing body of scientific evidence points to a link between mental health and the consumption of junk food.

Eating processed food on a regular basis can often lead to feelings of depression6,7 highlighting the importance of fuelling both your mind and body with the right foods.

Below is a list of nutritious foods that could provide an extra energy (and associated mood) boost:

RECIPE COLLECTION: A dozen things to do with eggs

RECIPE INSPIRATION: 12 things to do with canned beans

Here are some key strategies to help maintain an optimum mood-food balance:

While food may not always be the solution to a down day, there is growing scientific evidence that links food and mood, although more research is needed in this area.

As ever, a healthy balanced diet is the key to maintaining good health, and keeping your mind and body strong, healthy and happy12.

The WW programme is a holistic weight loss & wellbeing programme that helps you lose weight, shift your mindset and move more. If you have similar goals, find out more and start your journey today.

Does being happy help you lose weight?

9 science-backed ways to be happier

Katie: I was pretending to be happy, but now my smile is real