Rachael: I’m feeling happier and fitter than ever

Rachael was fed up of being the frumpy friend and with her self-esteem at rock bottom, she knew what she need to do.

"I love the fact that chicken is a ZeroPoint™ food because we often sit down as a family and have a midweek roast dinner and now, this can be a zero SmartPoints meal. " 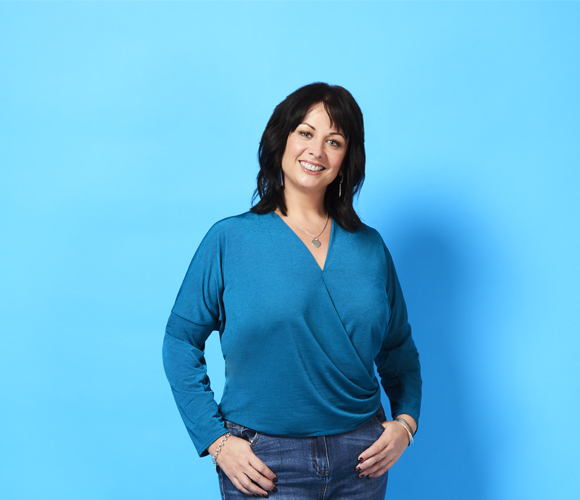 The sweater was light blue with the slogan GIN AND ON IT emblazoned across the front and I fell in love with it immediately. As a gin fan, it appealed to my sense of humour but as I browsed through the website, I realised that the biggest size – extra large – would never fit my size 22-24 frame.

It sounds odd, but that’s the exact moment I made up my mind to lose weight. I wasn’t bothered about the numbers on the scale. I didn’t even want to know how much I weighed. I simply wanted to be slim enough to fit into that jumper.

Although my partner Steve loves me whatever size I am, I was fed up of being the frumpy friend and my self-esteem was at rock bottom. I’d recently been to a friend’s 40th birthday party and she looked incredible. I remember wanting to go home and cry. Nothing I could have worn would have been made feel attractive.

So I joined WW. But I didn’t breathe a word about it to anyone, not even my family. I’d been to so many slimming clubs in the past, including WW, and it was the same old story every time. I’d lose a stone, then get bored, put it back on and more. I seemed to have been on a constant diet since my early teens and now I believe that was contributing to my weight problem. The more I focused on food, the more I ate. I had reached a point where I’d had enough. I was on medication for my blood pressure and not being able to buy a sweater in a small enough size was a tipping point.

This time, my mindset was going to be completely different. I didn’t want to know how many pounds I was losing every week. I haven’t even set myself a goal weight. I’m doing this purely for me and how I look and feel. In the past, if I had a bad day, that was the end of the diet. But I realised that one day really doesn’t count in the long term. If you have three meals a day, that’s 21 meals in a week so even if you have three bad meals in one day, that’s not going to matter. So I started being kinder to myself and if I had the occasional blip, then I wasn’t going to beat myself up. I also didn’t want to pass any negative messages about weight and food onto my daughters Claudia and Darcie. There’s enough pressure on young girls today when it comes to body image.

The weight has come off steadily and when WW Freestyle™ was introduced, I was really excited to try something new and be part of the trial. My first impression was very positive although I was also wondering how I’d make foods such as natural yogurt taste nice. But I’ve since found that if you add some sweetener and lemon zest it’s delicious.

I’ve never been a huge fruit fan but I’m eating more of that on WW Freestyle. However, I find because there’s so much protein I’m not needing to snack. I love the fact that chicken is a ZeroPoint food because we often sit down as a family and have a midweek roast dinner and now, this can be a zero SmartPoints meal. I can make scrambled eggs with toast or baked beans for breakfast, which keeps me going for most of the day. Or if I’m on the go, I’ll have shredded wheat, which is also filling.

I’m feeling happier and fitter than ever. The other day I was late for the school pick-up and had to run and as I arrived at the school gates, I thought: ‘Wow, I just ran and I feel okay’.

My confidence has soared. On holiday, I posed happily for full-length shots in my shorts and for the first time in years could do up my seatbelt on the plane and the armrests no longer dug into my thighs. The other day I went to a waterpark with the girls and even fitted into a wetsuit no problem.

As for that jumper, I bought it as soon as I could fit into it. It’s hanging up in my wardrobe now but it’s too big for me. But it reminds me to keep setting myself small goals and not fixating on a number.

*Rachael has been following the plan since April 2016.