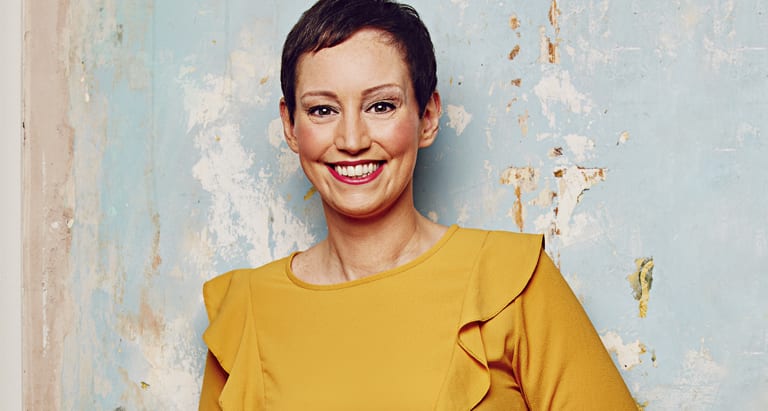 Nicola: Nothing was going to derail me, not even surgery!

After Nicola's life had been turned upside down by breast cancer, she needed to regain control of her health. Now, she’s in remission and fighting fit.

"Losing weight and getting fit was a huge part of my recovery."

Finding a lump in my breast while I was in the shower one day was the day life changed. I’d always been optimistic, so, despite being referred for tests, I convinced myself I’d be okay. I was mum to an energetic two-year-old, Ava, wife to Brian, and had a busy job as a physiotherapist. Plus, I was only 35 at the time, so surely cancer wasn’t something that could happen to me? But it did. And it was worse than I could have imagined.

In January 2016 biopsy of the lump revealed I had triple negative breast cancer – a rare form of the disease, which tends to
affect young or black women and is usually high-grade, meaning the cells grow quickly. Friends and family rallied around me as I immediately started six sessions of high-dose chemotherapy, plus steroids. I knew the treatment would cause my hair to fall out, and I wanted to get in there first, so I shaved it off just before my second dose of chemo.

Meanwhile, the steroids caused my whole body to swell. Everywhere from my face to my ankles looked round and puffy. My life became a series of hospital visits, but I knew I had to remain determined to get better.

When I was nearing my last session of chemo, I began to realise how much the experience was affecting my mind and body. I’d always been a size 12 to 14, and never felt concerned about my weight. But cancer treatment had left me looking and feeling like a completely different person. It was such a stressful time that my regular meals and routines had gone out the window. Plus, the medication had made me gain 2st. When something as life-changing as cancer happens, all you want is for things to return to ‘normal’, and the fact I didn’t look or feel like myself wasn’t helping.

Feeling desperate to regain control of my health, and having my doctor advise me that being fit and eating well would be important for my recovery, I made two important decisions – to join my aunty Angela at her Weight Watchers meeting, and to sign up for the
marathon-length Shine Night Walk London that September, in aid of Cancer Research UK.

My aunt had lost 4st since joining two years earlier, and I’d seen how her health had improved as a result. So in May 2016, just a few weeks after my final session of chemotherapy, I went to my first Weight Watchers meeting. The hospital arranged for me to have a wig, which looked a lot like my natural hair, so I wore that to the meeting. I’d been in bed for the whole 11 days prior,
knocked out by the chemo, and arrived feeling self-conscious and emotional. But my lovely Coach Christine and the other members were all so supportive. They became a source of strength for me, as well as laughter. Back home, bursting with  motivation, I ditched the ready meals I’d become reliant on during treatment and stocked up on fresh, healthy food.

I ate porridge for breakfast, pasta salad for lunch and made delicious dinners from scratch, such as chorizo and chickpea stew.

With Weight Watchers I’d found a new focus; something I could take charge of. Every Tuesday night, even when I felt tired or low, I went to my meeting. I even went the night before my lumpectomy – an operation to remove what was left of the tumour – before
going home to make a packed lunch to take to hospital with me the next day. Nothing was going to derail me from following the plan – not even surgery!

Luckily, the chemo had worked and I felt so relieved when the surgeon told me all of the tumour had been successfully removed. My doctors were pleased with my progress and referred me for radiotherapy. I was still in the process of having radiation when I
started training for the Shine Night Walk in June 2016. At first I walked round the four-mile track at a local park, then each fortnight I tried to add another four miles to my route. Brian was my biggest supporter, encouraging me to keep going. Gradually I felt my energy returning, and my jeans becoming a little looser.

I reached goal in August 2016, shedding the 2st I’d hoped for, just as my radiotherapy ended. Eleven days later, I completed the 26.2-mile Shine Night Walk, with my mum and sister. It gave me the most incredible sense of achievement, knowing we’d raised
£5000 for charity.

I’m now in remission and have just returned to work, two days a week. I’ll have check-ups for the next 10 years, to monitor me, but I’m feeling like my old self again and I know that losing weight and getting fitter played a huge part in that. Even my doctors agree.
I still go to meetings and at 10st 12lb, have now surpassed goal. No one can predict the future, but I know I’m on the best path to a healthy life, by eating well and staying active. I want to see Ava grow up, and will do anything to make that happen. I’m focusing on the positive and only looking forward.