Marielle wanted to take long walks with her dog ​​again

I've always enjoyed walking with our dog. Today, I enjoy our walks together but much more. WW makes it possible. It is for me a perfect balance to a stressful everyday life.

I still remember the moment I realised how fit I was again: walking with my dog, I ran after him in the woods, slaloming around the trees and hopping over branches - without getting out of breath. Before WW I would not have done that. Recently, we have got a second dog and my mother or brother accompany me on the walks. It's great that we spend more time together as a family.

How do you deal with it when others cook for you? This question occurred to me when I was working as an educator in a youth housing group. The shared lunch with the teenagers was just part of it. Of course, I could not beat the cook, I wasn't sure how much oil she would use, and I would just leave the pizza and breaded foods. But even during this time, I was able to maintain my weight, because in the morning and  in the evening, we ate mainly foods with 0 Points® . So I have - with WW Digital - lost a total of 1st. 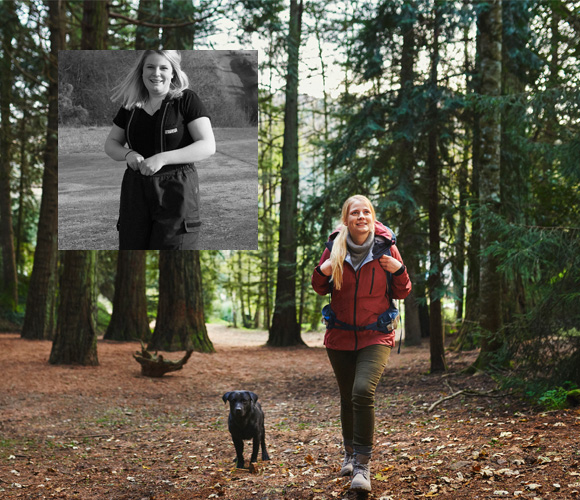 Equipped for every use

I am already active as I have been in the voluntary fire brigade for a long time: I got my first firefighter trousers at the age of 15 - in size Medium. When they no longer fitted, I used some bigger trousers that belonged to the men because a new protective pair of trousers was quite expensive. But at some point, a new pair of trousers in size Large had to come. One day, just as we were called to a mission, I realised my trousers were ripped! What a drama! Now, I wear a brand new pair of protective trousers - in size Small! Of course, missions and exercises are also much easier for me. Our respiratory exercise route, where you have to climb an endless ladder, among other things, I master today with ease.

At meetings with the volunteers of the volunteer fire brigade, during exercises or socialising, a lot of sugary drinks were always drunk. There was also mineral water and Points® friendly drinks, but they were in the pantry at the back and never made it in the fridge. Today, however, there are always a few bottles at hand - and not only because I put them in there, but because the comrades have thought better of it and I see more of them drinking water instead of sugary drinks. I am very happy that I was able to inspire others to develop healthier habits.