Buddying up with her WW Coach was the best thing member Claire ever did.

"Sharon helped me realise it’s not the number on the scales that counts, but feeling happier, healthier and more confident on the inside." 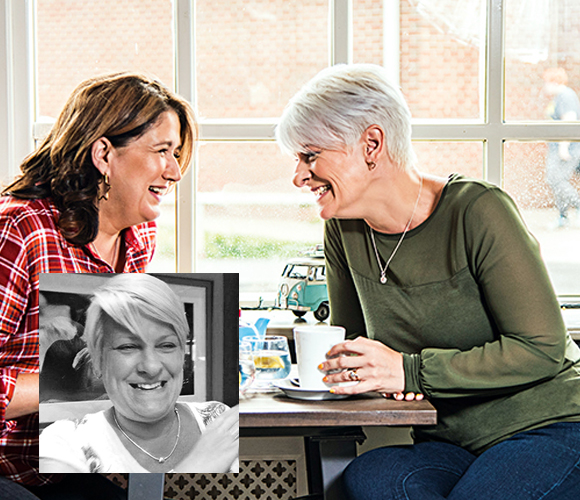 I’d been attending Sharon’s WW Workshops for several years, but dipped in and out. One day, Sharon announced that we all had to buddy up with one another to help keep each other accountable. When Sharon announced we’d be buddies, I panicked, but it was positive pressure.

We decided to do visual tracking – taking a photo of every meal and drink and sending them to each other. It really helped me think about my portion sizes. It was so effective, we decided to keep it up, tracking every day, including our birthday, holidays and Christmas Day.

We’re both Sunderland season ticket holders, so it was great to finally have some female company at matches as well as encouragement when it comes to making healthier food choices. Previously, I’d used match days as my excuse for going off track, but thanks to Sharon, I now take WW quiches and packs of fruit to share at the game. She’s even persuaded me to switch my usual lager for a slimline tonic with spirit.

Before Sharon and I became friends, I’d tried boot camps, which resulted in me losing weight quickly. But I could never sustain it and always put the weight back on. I ended up with an unhealthy view of weight loss and would weigh myself several times a day. But Sharon helped me realise it’s not the number on the scales that counts, but feeling happier, healthier and more confident on the inside. Now we go for walks together to stay fit.

We’ve supported each other not only with our weight loss but through emotional upsets and ill health too. I lost my mum-in-law in 2015. It was devastating, but also a wake-up call. It made me more determined to get as healthy as I can for my children. Thanks to Sharon, that’s where I now am.