Annie: I wanted to lose weight for me

When Annie's health- both physical and mental- was at the lowest it had ever been, she knew it was time to do something about her weight.

"WW gives you the perfect balance of structure and discipline, at the same time as the freedom to live your life your way." 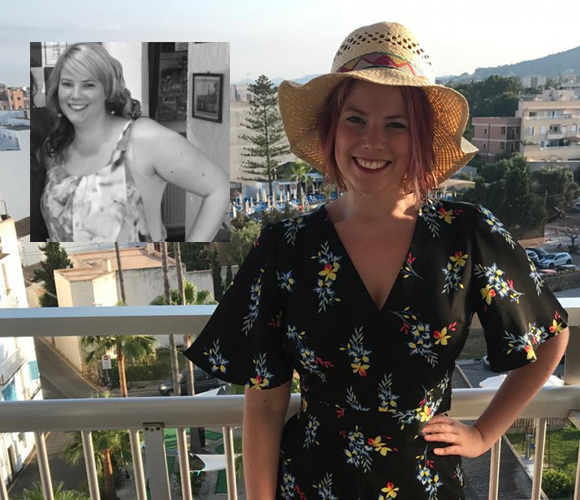 My journey with WW has been a long one, and somewhat of a rollercoaster! I have always struggled with my weight. I was a chubby child but passed it off as puppy fat for as long as I could, but was bullied in secondary school when my weight sky rocketed and I reached about 14st before I was even 16.

I first joined WW in the summer of 2006. I was fed up of being the fat friend. My main motivation was to lose weight for my summer prom. Thanks to WW, I went from eating a bucket of cereal for breakfast, unhealthy school lunches, McDonalds and chocolate on the way home from school followed by dinner when I got home, to eating three balanced meals a day, and the odd healthy snack in between.

I managed to maintain my goal weight all through sixth-form college, and all but the last few months of my 3-year undergraduate degree - still attending WW Workshops to make sure I kept an eye on things. Towards the end of my degree, around March 2012, I ended a long-term relationship and met my then new (and I'm very happy to say, now current!) partner Pete, which meant lots more going out drinking with my friends and a lot more dinner dates and weekends away. The weight slowly began creeping back on, although I had stopped weighing myself, I could feel it; but I was happy regardless.

In December 2015, I was diagnosed with depression, which I think looking back was largely to do with study stress, and my weight. Over the next few years the weight gradually piled back on, until I was the size I had been when I first joined WW. Having slimmed down to a size 10 before meeting Pete, by now I was lucky if I got into a size 18. And it wasn't just my physical appearance that had changed - my bubbly, outgoing personality had nearly disappeared and I had retreated into my shell, feeling self-conscious and anxious most of the time.

The moment I knew things had to change came whilst we were living away. After a few weeks of feeling exhausted, thirsty and having suffered various infections, I was sat in the pharmacy car park having picked up some antibiotics for one of the infections, and the fear suddenly hit me - I had given myself Type 2 diabetes (thankfully I hadn't). With a sister with Type 1, my risk was already increased, and I had made myself more vulnerable by letting my weight get so out of hand.

I decided the start of my PhD would be my fresh start, as I knew I was going to spending a lot of time sitting at a desk, and I also knew I would have to do things like stand up and present at conferences in front of a lot of people, and the thought of doing that feeling the way I did about myself was just terrifying.

I decided to visit my GP for some advice on how to lose weight again, and he said he would refer me for the Tier 2 Weight Loss Management Programme. I was really excited, but I was disappointed when I was told my BMI was not quite high enough to be eligible for the programme.

My GP offered me a 12-week referral to WW or Slimming World instead, and I opted for WW, as I had tried Slimming World over the past few years and never really got on with it. On 12th October 2015 I went to my first Workshop, feeling a funny mixture of hopeless and determined. My weight was 15st 11.5lb, the heaviest I had ever been. I was ashamed, but not shocked, as I knew from the signs my body was giving me that it was bad. When I sent off my GP-referral check-up form I think I had lost 27lb in the 12 weeks. My sister joined with me, although she had a lot less to lose, and it was really great to have a buddy along with me on my journey, always telling me how proud she was.

By October 2016, I had lost 4st. In that time period I had lost it slowly but consistently, not missing one Wellness Check-in, and only having two tiny gains throughout that year. This consistent weight loss was helped by the fact that I was a helper at my meeting, which held me to account to be there every week and kept me completely engaged with the programme.

When I reached my 5st milestone in January 2017 I cried with happiness, as this is the most I had ever lost, and when I stood on those scales weighing nearly 16st I never dreamed I would get anywhere close to what I had weighed when I was younger.

In March 2017, I climbed Mount Snowdon with my other half and his family - something I never thought I would be capable of doing. Not only that, but I stormed up there like a pro! No back pain, no wheezing, no moaning, and I really enjoyed it.

I truly believe that WW has helped me to keep my anxiety under control by giving me something else to focus on, something I feel I do have control over, and helping me to feel better in myself and more able to face things head on. It doesn't feel like a diet because you are not told you can't eat anything. You just get all the information and support to make informed decisions. It is very rare that I have to go outside of my SmartPoints® budget, especially since WW introduced more ZeroPoint™ foods. But when I do, I know that I can draw a line under it, get back to my WW Workshop and get my injection of motivation and be back on track in no time. I can eat out, throw dinner parties, go to the cinema, have a completely normal social life, and not worry because it's so flexible it allows for real life to continue.

To join for FREE