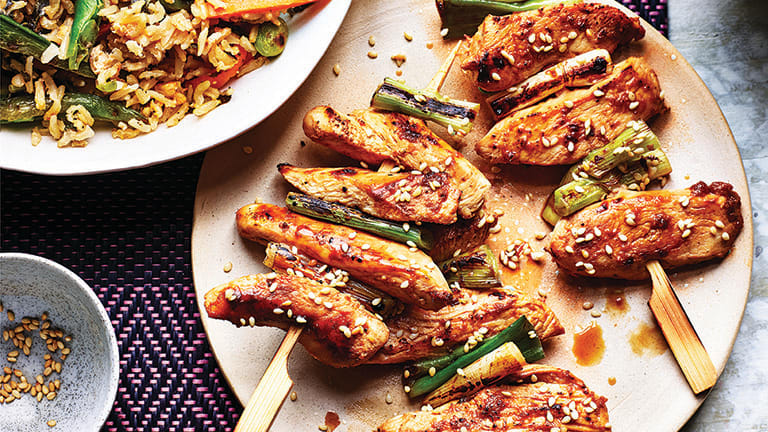 These recipes will get all up in your grill, for all the right reasons.

Fire up the barbecue!

When the sun comes out, so do our barbecues! Whether you're flipping burgers for a socially distanced gathering or grilling solo, there's nothing like a barbecue to get you feeling those summertime vibes.

If you're lucky enough to have a garden or patio, dining al fresco is a great way to escape your home's four walls and get a change of scenery. If not, these recipes can also be brought to life in your kitchen under the grill.

Time to kick back with a beer or glass of wine - it's barbecue time!

Scroll down for the full recipe - plus five more - and some clever BBQ swaps to save you some SmartPoints®.

Top swaps at the BBQ

Try these clever swaps to make your meal lighter and healthier, without losing any of the flavour.

Instantly ramp up the flavour factor of your barbecued meat and veggies with this delicious BBQ sauce from the online WW Shop. It's 0 SmartPoints® (compared to other brands which have SmartPoints values) and you can buy a pack of six sachets for just £1.50, which you can get delivered right to your door.

Ready-made ketchups often contain a lot of added sugar. Instead, toss together 2 chopped tomatoes, 1 diced red onion, 1 deseeded and diced red chilli, 2 tbsp chopped fresh coriander and a squeeze of lemon juice. Use it on burgers and hot dogs for plenty of flavour and 0 SmartPoints.

Swap burger buns for grilled portobello mushroom caps. Their meaty taste and texture make them a perfect match for juicy burgers, and they're a ZeroPoint™ food, so you'll have SmartPoints spare to spend on toppings instead.

What would a barbecue be without dips? Serve them up with a selection of vegetable crudités such as pepper strips, baby sweetcorn and sliced radishes instead of regular crisps.

It's tempting to brush a knob of butter over a grilled corn cob, but a good squeeze of lime juice and some sea salt will add plenty of flavour for no extra SmartPoints.