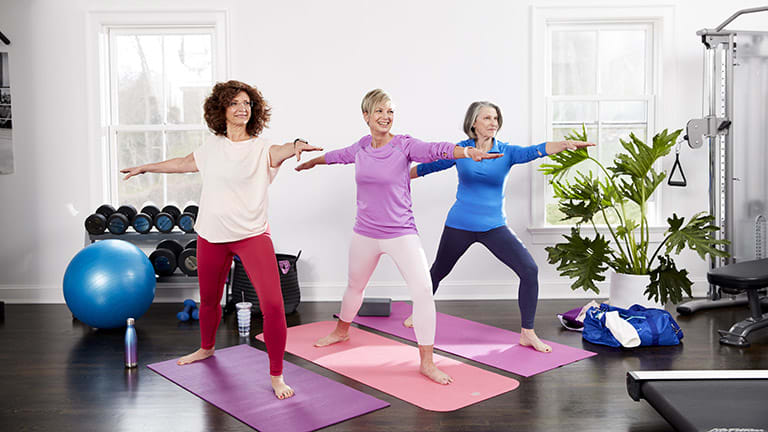 Yoga for beginners: a guide to ten different styles

Reach your cardio goals faster with these ten styles of yoga.

Yoga is a great exercise for mind and body. Poses, called asanas, help improve your physical strength, while deep breathing during the poses can help clear your mind. Most classes finish with a meditation to rebalance mind, body and spirit.

The benefits of yoga

Despite its popularity, the fitness benefits of yoga can often be overlooked because of a few common misconceptions. Many people assume yoga doesn’t raise your heart rate as much as running or a spin class. However, integrating yoga into your regular fitness routine can actually help you to reach your cardio goals faster, as it increases stamina, strengthens muscles and improves balance and flexibility, as well as easing aches and pains and shortening recovery time.

An introductory guide to ten styles of yoga:

Hatha yoga has become a generic term for what we now just call ‘yoga’ in the West: asanas (physical postures) as a form of physical exercise for relaxation, body flexibility, strength and personal concentration. Ideal for beginners, a Hatha yoga class typically takes a basic and classical approach, focusing on postures (asanas) and breathing (pranayama) exercises.

Ashtanga and Iyengar yoga both have their roots in Hatha yoga. Many of the asanas are the same, but the approach is different.

Ashtanga involves following a series of specific set poses, each held for five breaths. It’s a vigorous, demanding style of yoga, flowing from one pose to the next with each inhale and exhale. There are six established and strenuous pose sequences — the primary series, second series, third series, and so on — practiced sequentially as progress is made.

You need a good level of fitness, as there are no breaks! Ashtanga is ideal for building stamina, tone, strength and flexibility and there are sessions available for everyone, from beginners to experts.

Iyengar Yoga is a purist style of yoga developed by and named after B.K.S Iyengar. Placing the emphasis on precision and alignment, Iyengar Yoga is excellent for building strength and flexibility with a wide array of yoga props — blocks, blankets, straps, chairs and bolsters.

Iyengar yoga is great for learning the subtleties of correct alignment for all ages and abilities. If you suffer with injuries or stiffness, or just prefer a slower pace, this is the one for you.

Scaravelli-inspired teachers will encourage students how to listen to themselves, how to practise yoga in a way that makes sense personally, in their own bodies and minds.

Hot yoga classes take place in a heated environment. Hot yoga sessions differ from Bikram Yoga classes in that they do not follow a set routine and are not a part of the Bikram set up. Those who attend these classes often love the feeling of ‘sweating it out’ and find greater flexibility available to them, although the specific health benefits of hot yoga are yet to be proven.

Chair Yoga is aimed at all people for whom standing or practising yoga on the floor is difficult: those with a condition such as arthritis, a debilitating illness, mobility issues or a disability. The objective of Chair Yoga is to make yoga accessible by all. Poses will be adapted so that the same stretch or twist can be achieved whilst sitting in a chair.

Restorative yoga is all about relaxation and healing for the mind as well as the body. Simple passive poses are held for as long as twenty minutes with the help of props such as bolsters and straps. Blankets and eye pillows help you sink into a deep relaxation without falling asleep.

Yin Yoga gets its name from the Taoist tradition, where ‘yang’ relates to movement and ‘yin’ to stillness. We all need both to obtain balance. Yin Yoga calms the mind and stretches out the body through a series of passive, seated poses. Poses target the connective tissues in the hips, pelvis and lower spine and are held for up to ten minutes. It’s all about finding that feeling of release and letting go.

Yoga Nidra is a Sanskrit term for that state of consciousness between waking and sleeping, commonly known as yogic sleep. Anyone can practise Yoga Nidra and it’s a great, simple way to relieve stress. As you rest comfortably in savasana, this immensely powerful, systematic meditation leads you to that point at which the body is completely relaxed.

You can find out more about specialised yoga, such as Acro Yoga, Aerial Yoga, Laughter Yoga, Pregnancy Yoga, Yoga for Runners and Yoga for those affected by cancer, in The Yogamatters Guide to Styles of Yoga.

If you’re interested in finding out more about other yoga schools and traditions, then check out The Yogamatters Guide to Schools of Yoga.