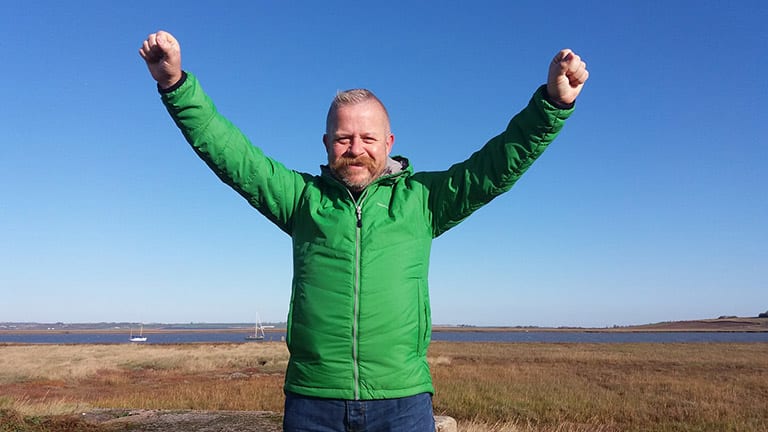 Our members are loving the new Connect groups!

Hi, I’m Rik (@ww_rikgod_coach on Instagram) and in the summer of 2017 I became a WW Coach. I fully embrace wellness in my personal life as well as my career, and I’m proud to have WW Coach as my job title.

I rejoined WW about 5 years ago when I became a primary school teacher. Unfortunately, I became a statistic after having a stress-related breakdown at the end of 2016.

In hindsight, it was an almighty release and I left to build a new, stronger me. As part of the healing process I walked 1000 miles, raising money for the charity Mind. It took me 11 months and enabled me to get physically fitter, think about my life’s direction and reflect on my lot.

I didn’t want to talk about it. I’m very open about the breakdown itself; I just never felt the need to talk about it in depth. Some people break a leg…I just broke my head. But I’ve moved on. I know me best. I’m a bloke. Sometimes we have a different take on life. That’s why I love WW Bros!

In my WW Coach interview, I explained that I wanted to encourage more men to join and experience the same health and happiness I’d found being a part of the WW community. Naturally, I leapt at the chance to become involved with the WW Bros.

What is WW Bros?

WW Bros is a group on the WW members-only digital community, Connect. Accessible via the app, Connect is a great place to share your journey through photos and videos. You can also join groups based on your interests, hobbies and identity.

Play the video below to see how it works, and to find other members just like you for a daily dose of inspiration!

So what purpose does WW Bros serve, and why should you consider joining?

WW Bros is a support.

WW Bros is a support group.

WW Bros is a support group for men.

WW Bros is a support group for men in our WW family.

WW Bros is a support group for men in our WW family, where we can open up.

WW Bros is a support group for men in our WW family, where we can open up about what it is to be a man.

WW Bros is a support group for men in our WW family, where we can open up about what it is to be a man, away from the expectations.

WW Bros is a support group for men in our WW family, where we can open up about what it is to be a man, away from the expectations of what is…erm, expected of us!

WW Bros is an essential support that allows men to benefit from the sense of community that WW prides itself on. We’re nearly 800 strong, and there’s always room for more bros!

Sometimes it can be daunting being the only man, or handful of men, in a WW Workshop. I know one member who didn’t get past the door for three weeks running, but eventually made it.

In the past, as a member myself, I’ve heard many misconceptions about being a man following the WW programme. One is that we’re “lucky to have a higher SmartPoints Budget, which makes it easier”. Apparently, we also lose weight quicker. I wish that one was true!

That’s why having a male-only group is so useful – it’s somewhere we can go to open up, talk about the programme and be ourselves.

Here are a few quotes from members of WW Bros:

"I like this men-only part of the site as I feel I can be more open."

"The WW Bros group feels more focused on our experiences, rather than just being a generic social media group."

"It’s reassuring to know there are others facing the same struggles with both physical and mental health."

And we’re not just on Connect – using the hashtag #wwbros I’ve found inspirational WW Bros on Instagram from all over the world.

If you’re a Bro wanting to be healthier in both body and mind, then WW is making great strides to raise the profile of men. We now have a greater presence in the magazine, programme materials and Studio signage and this will only increase as our participation grows.

Whether you want to become a Bro, or you’ve got a Bro in your life who would benefit from a weight loss and wellness support group, the WW Bros group offers a straight-up, safe and encouraging space where we can reach out or simply hang out. Pop in and say “hi”!