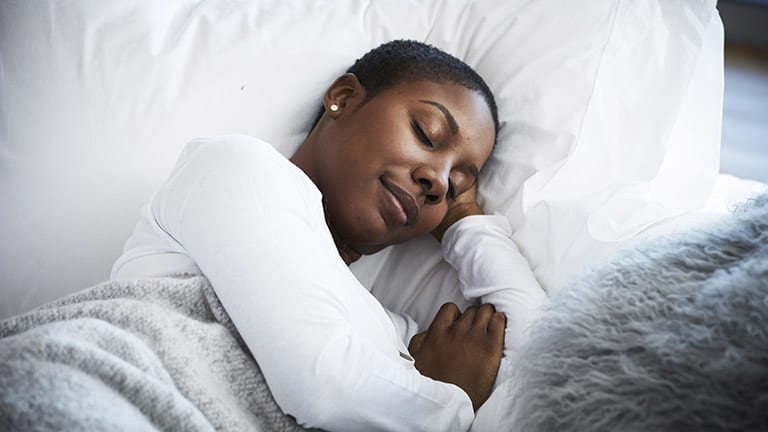 What is obstructive sleep apnea?

Be in the know about this common sleep disorder.

Obstructive sleep apnea is a common but serious condition where the airway becomes repeatedly blocked during sleep, reducing or completely stopping airflow.

The condition occurs when the walls of the throat relax, narrow and collapse during sleep, interrupting normal breathing.

It’s normal for the muscles and soft tissues in the throat to relax to some degree while sleeping. For most people, this doesn’t cause breathing problems.

With sleep apnea, the muscles and soft tissue narrow to the point where airflow is interrupted, meaning that the brain and the rest of the body may not get enough oxygen.

Breathing may stop for up to a minute until the brain registers a lack of oxygen and pulls the sleeper out of deep sleep (to lighter sleep or wakefulness) so the airway reopens and normal breathing resumes.

The sleeper may gasp or snort and fall back to sleep without realising. Repeated episodes may be experienced throughout the night, with episodes occurring every 2-3 minutes in severe cases.

Since sufferers usually have no memory of interrupted breathing (and may be unaware they have a problem), symptoms of sleep apnea are often noticed by a partner, friend or family member.

Symptoms include loud snoring, noisy and laboured breathing and repeated short periods where breathing is interrupted by gasping or snorting.

Some people also experience night sweats and may wake up frequently during the night to urinate.

Poorly controlled sleep apnea can lead to regularly interrupted sleep, increased tiredness during the day and decreased quality of life.

It can also increase the risk of developing certain conditions including: high blood pressure, stroke, heart attack, type 2 diabetes* and an irregular heartbeat.

Depending on the severity, you may also be advised to stop driving until your symptoms are under control.

If you’re diagnosed with sleep apnea, it’s a legal obligation to inform the DVLA, as this is a medical condition which could impact your ability to drive.

Risk factors for sleep apnea include:

Excessive body fat increases the bulk of soft tissue in the neck which can place a strain on throat muscles.

Dr. Gary Foster, Chief Scientific Officer at WW International, says: “Think about your upper airway from your jawbone to the top of your torso. The more fat in that area, the ‘wobblier’ it becomes and that’s what creates the collapse.”

Losing even a little bit of weight can make a difference, and WW can help - join today to start working towards your weight loss goals.

Sleep apnea is more common in men than women. This may be related to different patterns of body fat distribution.

While sleep apnea can occur at any age, it’s more common in people who are over the age of 40.

Hormone fluctuations during the menopause may cause the throat muscles to relax more than normal.

Having a large neck

Men with a collar size larger than around 43cm (17 inches) have an increased risk for sleep apnea.

Having an unusual inner neck structure

Nasal congestion, such as nasal polyps or a deviated septum (where the nose tissue that divides the two nostrils is bent to one side), may result in the airways becoming narrowed.

Consuming alcohol can make snoring and sleep apnea worse, especially if taken before going to bed.

You’re also more likely to develop sleep apnea if you smoke, take medicines with a sedative effects or have a family history of the disorder.

*Although it is unclear whether this is the result of an underlying cause, such as obesity.

How to treat obstructive sleep apnea

Kris overcame his sleep apnea by losing weight with WW