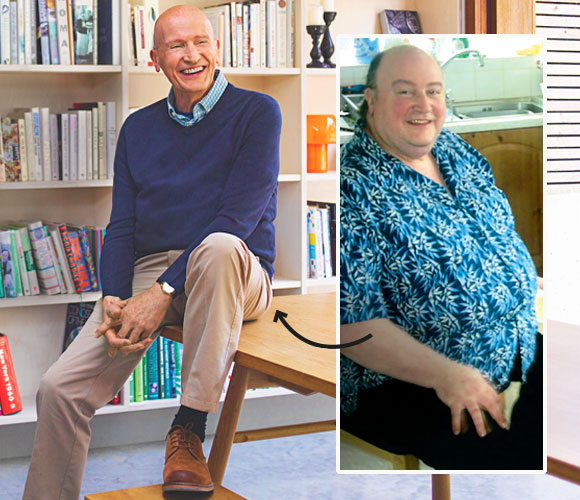 Food became my friend  My weight had always fluctuated over the years and at 18 I weighed 18st. But by the mid-90s, my primary relationship was with food. Although my three sons were a great source of pride, I was in my mid-40s, divorced, and at an all-time low emotionally. Food became my 'friend' and my weight crept up, peaking at around 30st. On one visit to the GP, I had to shuffle sideways into the surgery, and watched as one of the nurses gasped in disbelief. I joined Weight Watchers the following week.

My first meeting  When I walked into my first Weight Watchers meeting, I was 29st 3lb. What I didn't know then was how much the support of the group and my Coach, Vanda, would come to mean to me. I like my food, so I'm not interested in faddy diets, but what Weight Watchers does is focus your mind: it says, 'This is how to eat healthily and if you stick with it, you're going to lose weight.'

ExercisingI was the fattest man on the treadmill at the gym, but I tried not to care. It felt good to get my body moving again. A brisk walk soon turned into a slow jog, and exercising helped boost my confidence. And the weight started to fall off. In the first four weeks, I lost 1st 11lb, and after a year, my weight loss had progressed amazingly. When I finally hit my personal target of weighing less than 16st, it was such a special moment.

A new relationship  Like many of life's lessons, I didn't fully fall in line first time around. Once I'd arrived at this milestone, I made the mistake of getting complacent and before I knew it, I'd put on 3st. However, a new relationship gave me the motivation to reach my Goal Weight – and stay there. Anne was an old friend, but as 2013 unfolded, we realised what we felt for each other was something deeper. I didn't want to get involved with anyone while my weight was still unstable, so I went back to Weight Watchers in September 2013. A year later, and weighing nearly 15st less than I did at that first meeting, Anne and I moved in together.

My biggest motivator...Now I don't take anything for granted, especially when it comes to food. I still go for my weigh-in once a month and I know what I can and cannot do. A busy, happy life is a great weight-loss tool. But the arrival of my beloved grandchildren, Gunesh, eight, and Ayla, three, has been the biggest motivator for me to keep my weight under control. Being able to play with them without getting overtired is one of the great pleasures that helps me stay in check.

Ray found a healthier attitude with Meetings + Online – discover yours

Healthier You: It was time to take back control of my health

Meetings, Online or a little bit of both - we've got options, whatever your lifestyle!