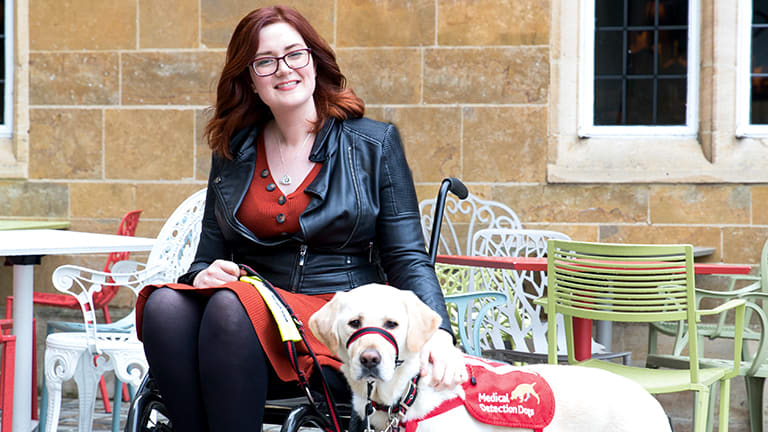 Michelle: ‘A small chair was a massive result’

When Michelle was told she had to use a wheelchair, her healthy lifestyle took a knock. Now, she’s using her chair to her advantage on her get-healthy journey.

After collapsing, unconscious, while celebrating my 21st birthday, I was rushed to hospital where I underwent tests. I was diagnosed with postural orthostatic tachycardia syndrome (PoTS), a condition that affects the nervous system and blood supply to the brain and heart, causing sufferers to pass out when they stand up. While it was a relief to know what was going on, the condition soon started impacting my life. I was fainting so often that I was afraid to leave the house. The solution was to use a wheelchair.

While using the chair gave me back my freedom, it also signalled the start of my weight gain. Before my PoTS diagnosis, I’d led an active life, even going to aqua aerobics four times a week. But after seven months of using the wheelchair, I’d put on almost 4st.

Determined to get healthy, I joined my aunt and cousin at their WW Workshop. I’d just been matched with a Labrador named Francis, from Medical Detection Dogs, who could detect and alert me if I was going to faint. He came with me to my first Workshop and my coach, Sarah, and fellow members could not have been more welcoming to both of us. Six months later, I’d dropped to a size 12 and started sitting more upright in my chair – I felt comfortable and confident.

After losing weight, my thoughts turned to getting active again. I invested in sessions with a personal trainer who showed me exercises I could do, despite my medical conditions. Mostly, I lie on the floor to do them, and it’s really helped me tone up. When I reached goal, I noticed that not only were my clothes too big, but my wheelchair was, too. Talk about a non-scale victory! To celebrate, I bought myself an all-singing, all-dancing carbon-fibre wheelchair. When I posted about it on Connect, more than 3,000 people like it.

I work in an office located on the second floor, but it only has a small lift and I could barely fit in with my older, bigger chair. I had to get in at a tricky angle just so the doors would close. Plus, there was no room for anyone else. Since dropping a wheelchair size, so to speak, I can roll in and roll out with ease and even do a 360 degree turn if I want to. I refer to it as my milestone moment, and it’s just one of many ways my life has been made easier since starting my get-healthy journey.