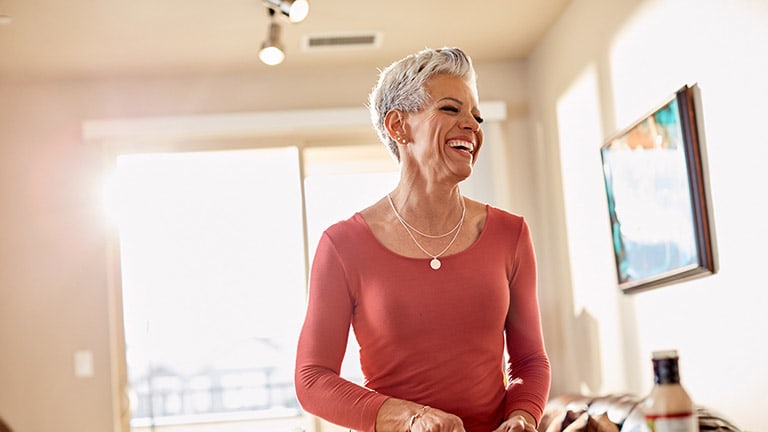 Why we need to laugh more

Whether you get your kicks from bad jokes or funny videos, laughter might just be the best medicine...

Can you imagine a future where your physician prescribes a regimen of rom-coms and stand-up? It might not be far off...

We already know that laughter makes us feel good. Now, new findings suggest it might also make us feel well. Promising tidbits of research show that laughter stimulates a multitude of systems in the body, with both immediate and lasting effects.

“The use of laughter is really helping to re-optimize and retune mechanisms in the body,” according to Lee S. Berk, DrPH, a professor and associate dean of research affairs in the School of Allied Health Professions at Loma Linda University.

Laughter, he says, is a positive stress event for the body, similar to exercise or listening to music, in that it triggers a cascade of positive changes, such as these.

RELATED: How to shift your mindset


Laughter’s effects start with the brain, where it does nothing short of altering your brain waves. Most of our waking hours — as we work, think, and perform activities — are spent in beta frequency, Berk says. His research shows that having a good laugh enhances an even higher frequency, gamma, which is associated with the highest levels of cognitive processing, including memory and recall.

It strengthens the immune system.


Laughter undoes some of the damage wrought by a stressful lifestyle. During a negative stress event, the adrenal glands secrete cortisol, a hormone that helps put sugar in the muscles (so you can run faster, for example). However, cortisol also suppresses the immune system. A person experiencing chronic stress is continually releasing cortisol and epinephrine, so the individual’s immune system fights all diseases, from colds to cancer, less effectively. Laughter may help bring the cortisol level back in line so the immune system can function well again.


At the same time it changes the cortisol levels, laughter stimulates the release of endorphins in the brain. You’ve probably heard of endorphins in the context of exercise, but laughter creates them, too. “They are the body’s own morphine,” says Berk. Indeed, he says, “We have our own apothecary within us”.

It makes us happy.


You need only look to your personal observations to confirm laughter’s power here, according to Billy Strean, PhD, a Professor at the University of Alberta. “Is your own experience not supportive of this?” he says. “Do you ever have a really good laugh and say, ‘Wow, I feel more stressed’?” Happiness is a variable as important to your health as levels of cholesterol, triglycerides, and haemoglobin A1c, according to Berk. Many diseases are caused or made worse by stress and depression; laughter may be the antidote.

What You Need to Know About Laughter


A few interesting tidbits to consider alongside the direct benefits of laughter:


While laughter utilises some of the same mechanisms as light exercise, it’s no substitute for a workout. “There is some caloric expenditure on laughter,” Strean says. “But don’t base your weight loss programme around it.”

It doesn’t require a certain type of laugh.


No need to force out belly laughs if they’re not your style; the benefit is the same no matter whether you giggle or guffaw, according to Berk.

It doesn’t have a downside.


Pharmaceuticals tend to have negative side effects on at least some people, explains Strean, so a high level of confidence is needed before medicines are approved for market. “With laughter, the opposite mentality should be true,” he says. “Tell people to laugh more until we have a good reason [not to].”

In a nutshell? Live, laugh, love.

How to be a positive person

Find what moves you (and makes you smile!)