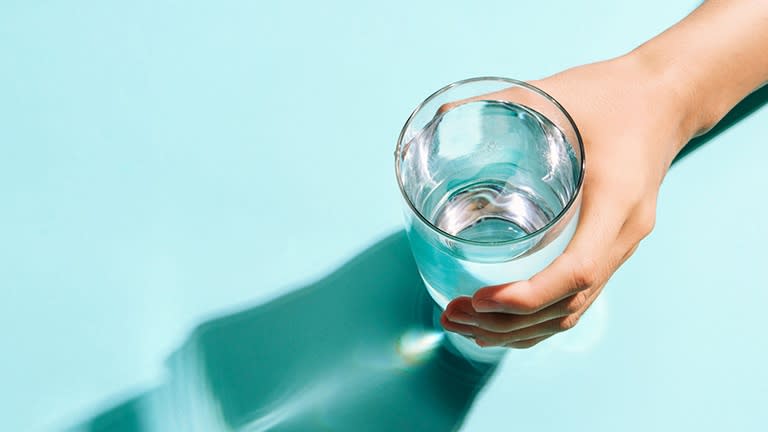 How drinking more water may help you lose weight

Water does more for the body than just quench your thirst. Here’s how it might even help you lose weight.

Chances are you’ve heard one of the many myths about water and weight loss, like how sipping it can suppress your appetite and boost your metabolism. But can drinking more water really lead to weight loss?

Here’s the deal: although about 60 percent of your body is comprised of water, there’s no proven link between drinking water and losing weight. After all, countless factors, behaviours, and predispositions can affect the number on the scale.

That said, staying hydrated is a good place to start, whether your goal is good health or weight loss.

Answer: Only anecdotally, but more research is needed.

To date, there haven’t been any large-scale studies connecting H2O and appetite; just anecdotal evidence that suggests some people may mistake hunger for thirst, which is triggered by mild dehydration, according to Dr. Melina Jampolis, M.D., a California-based internist and board-certified physician nutrition specialist. The result makes sense in theory: you resort to food when what your body really needs is water, a habit that may contribute to weight gain over time.

While reason follows that consuming water before eating could decrease food intake, and people who drank two glasses of water immediately before a meal in a small 2016 study ate 22 percent less than those who didn’t drink any water prior to eating, there’s not quite enough evidence to make a general recommendation around this.

At the very least, proper hydration during and after your meal can promote feelings of satiety, since fluid intake will help move food through your GI tract, signaling the “I’m done” feeling you get from hormones stimulated during the digestion and absorption process, Dr. Jampolis says.

At the end of the day, “unless you’ve been told by your physician that you need to restrict fluid (medications and some medical conditions will necessitate limiting H2O), drinking more water can’t hurt,” says Jackie London, RD and WW’s head of nutrition and wellness.

One theory suggests that drinking cold water may contribute to a temporary metabolic boost from thermogenesis, or heat production, since the body expends energy to warm the fluid to body temperature.

In theory, the more energy your body expends, the more calories you burn overall, but in practice, the effects are likely to be so minor that they wouldn’t impact overall calorie burn or weight.

That said, “even if the effect is negligible, it is important to stay hydrated,” says Elizabeth Huggins, an R.D.N. at Hilton Head Health, noting that there are few, if any, downsides to drinking more water.

Scientists are still learning about the human body and processes for burning fat for energy (a process called lipolysis) when the body is in a state of energy deficit. In animal studies, it has been found that increasing water intake may increase lipolysis, according to a 2016 mini-review of animal studies (mostly using rats), published in Frontiers in Nutrition. “We’re not certain of the mechanism, but mild dehydration decreases lipolysis, which may be due to hormonal changes,” says Dr. Jampolis, who was not associated with the review. Another theory posed in the animal studies: water expands cell volume, which could play a role in fat metabolism. However, it remains unproven among human subjects.

Answer: It sure can.

Because water contains no calories, filling your glass with flat or sparkling H2O instead of higher calorie alternatives like juice, soda, or sugar sweetened tea or coffee can reduce your overall liquid calorie intake.

As long as you don’t “make up” for those calories, for example walk out of a coffee shop with a muffin and water instead of your regular flavored latte, the calorie savings can add up quickly, Huggins says.

Also interesting: although diet soft drinks contribute no calories, replacing diet beverages with water may be a factor that contributes to weight loss in certain groups of people. Overweight and obese women who replaced diet beverages with water after their main meal showed greater weight reduction during a weight-loss program in a small 2015 study published in the American Journal of Clinical Nutrition. The researchers noted that the extra weight loss in those who drank water could be attributed to consuming less calories and carbohydrates, but more research is needed. All that said, since many diet beverages still hydrate and reduce calorie intake when used as a replacement for sugary beverages, they may help certain individuals lose weight.


5. Does drinking water increase the effectiveness of exercise?

Answer: While extra water won’t turn you into an Olympic athlete, adequate hydration can help your body function optimally during exercise.

Water is essential to the body during workouts. “When muscle cells are dehydrated, the process of building muscle is slowed, making your workouts much less effective,” Dr. Jampolis says.

What’s more, because water dissolves electrolytes - minerals that include sodium, potassium, and magnesium - and distributes them throughout the body, where their electrical energy triggers muscle contractions required for movement, an electrolyte imbalance can lead to cramping, according to Dr. Jampolis.

Staying properly hydrated during activity is extra important because the body loses fluids more quickly during exercise. It generates heat that’s shifted to the skin’s surface, where perspiration and subsequent evaporation help with temperature regulation.

Drinking up helps you maintain your blood’s volume, so you can optimise the expansion of blood vessels at the skin’s surface to release heat, according to Dr. Jampolis.

“If your body can’t dump excess heat via sweating, you’re setting yourself up for heat exhaustion or worse,” she says. “Adequate hydration can improve your workouts by decreasing fatigue, which can allow you to work out longer therefore potentially burning more calories.” That’s why it’s so important to hydrate before and throughout your workout, not just when you start to feel thirsty.

Answer: Only in theory; more research is needed.

On paper, it makes sense: because water keeps stools soft and facilitates the movement of faeces, the more hydrated you are, the easier it is for your system to move things along and the less likely you are to suffer from constipation, which can contribute to the feeling of belly bloat. However, there’s no research that directly connects higher water intake to reduced reports of belly bloat.


7. Does drinking water affect your motivation?

When you’re dehydrated, you might experience symptoms like fatigue, dizziness, and confusion - and who makes healthier decisions, like choosing a workout over watching TV on the couch, under those conditions? A study published in the International Journal of Sports Medicine found that dehydration also increases your body’s production of cortisol, the stress hormone.

“These symptoms could affect your motivation to exercise, cook at home, and make better food choices,” Dr. Jampolis says.


Other health benefits of drinking water

Remember, your body is made up of around 60 percent water, so weight loss isn’t the only bodily process affected by proper hydration. These are just a few examples of what else water can do:

Just like the rest of your body, your brain depends on H2O to work most efficiently (it’s made of 73 percent water). Even slight levels of dehydration (as little as two percent water loss) impairs your performance in tasks that require attention, cognitive functions and physical movement, and immediate memory skills, according to research published in the Journal of the American College of Nutrition.

“Water plays a major role in keeping the blood flowing effectively,” Huggins says. “When you’re dehydrated, the plasma/blood cell ratio changes in a way that make the blood thicker and more viscous. This makes it tougher for blood to flow where it needs to flow, increasing the stress placed on the heart.”

In addition, when your body’s cells don’t have enough water, the brain secretes a chemical that constricts the blood vessels, which can lead to hypertension or high blood pressure, which can increase the risk of stroke and heart disease. Staying hydrated keeps your blood vessels from constricting so blood can flow normally.

Track your water in the WW app!