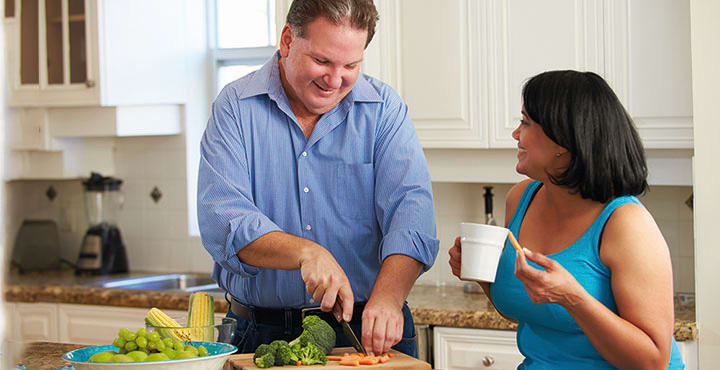 You've alreadymade a great choice by taking steps to lead a healthier lifestyle with us, so we wanted to share this exciting news with you.

A new, 1 year UK-based study published this week  in The BMJ, Open Diabetes Research and Care showed that people at risk of developing type 2 diabetes who were referred to Weight Watchers* lost significant amounts of weight and saw significant improvements in the control of their blood sugar levels -  the programme was effective.

Almost 70% of people either reduced their risk, or were no longer at risk of type 2 diabetes at the end of the programme.

The independent study, commissioned and paid for by the London Borough of Bromley Local Authority, looked at whether an augmented Diabetes Prevention Programme (DPP) delivered by Weight Watchers using a GP referral pathway could reduce the progression of type 2 diabetes in those at risk of developing the disease.

166 patients were referred to Weight Watchers from 14 GP practices across Bromley. Patients were offered the programme, which included a special welcome session followed by Weight Watchers meetings for 48 weeks, supported by both a Coach and specific curriculum. This real world study was conducted by Carolyn Piper and Dr. Agnes Marossy in the Public Health department at the London Borough of Bromley Local Authority, Zoe Griffiths, Head of Programme and Public Health, Weight Watchers UK and Dr. Amanda Adegboye at the University of Westminster.

79% of people took part in the programme. At 12 months, those who had attended the welcome session and started attending meetings (114) achieved a mean reduction in HbA1c (glycated haemoglobin) of 2.84mmol/mol (from 43.42 +1.28 to 40.58 +3.41). Of those with comparable data, 49% returned to normoglycaemia (were no longer at high risk of developing type 2 diabetes) and a further 20% significantly reduced their risk of developing type 2 diabetes. This was associated with a mean weight reduction of 10kg and a mean reduction in BMI of 3.2kg/m² (from 35.5kg/m² +5.4 to 32.3kg/m² +5.2) as well as increases in physical activity.

The researchers concluded that offering a GP referral route partnered with Weight Watchers can considerably reduce the risk of type 2 diabetes. This evidence comes as type 2 diabetes, both incidence and prevalence in the UK is rising dramatically. Type 2 diabetes is closely linked to obesity and can therefore be reversed by weight loss.

Lead author Carolyn Piper Public Health Manager at the London Borough of Bromley Local Authority says: “Type 2 diabetes is one of the most significant public health challenges of our time. A new diagnosis of type 2 diabetes is made every two minutes in the UK with the risk of developing the disease significantly influenced by our lifestyles. It's within our power to reverse the ever increasing tide of type 2 diabetes with the right education and support. We undertook this research in the real world to show that the disease can easily be reversed using existing resources and providers in a more effective way at a time when budgets are being squeezed.”

“The lifestyle changes achieved in the intervention, measured by weight loss, translated into considerable reductions in diabetes risk, with an immediate and significant public health impact. Weight Watchers provides intense support via weekly meetings, digital tools including an app, a vibrant online community and help whenever you need it with our online Coaches.

“We’d welcome the opportunity to work with Public Health England as part of the Healthier You: NHS Diabetes Prevention Programme rollout."

Choose the best plan for you

Weight Watchers International, Inc. is one of the most recognised and trusted brand names among weight-conscious consumers. Weight Watchers provides commercial weight management services through a global network of Company-owned and franchise operations and offers innovative, digital weight management products through its websites, mobile sites and apps. These services and products are built on the Company’s weight management programme, which helps millions of people around the world lose weight through sensible and sustainable food plans, activity, behaviour modification and group support. Weight Watchers has an unparalleled network of service providers to assist members on their journey and also offers a wide range of products, publications and programmes for those interested in weight loss and healthier living.

This study was funded by the London Borough of Bromley Local Authority Public Health Central Government Grant. Funding was received from Weight Watchers International Ltd to publish the research article. Zoe Griffiths is a Registered Dietitian for Weight Watchers International Ltd and was part of the steering group mobilising this project. The Registered Dietitian was responsible for the training of staff and implementation of the Weight Watchers Diabetes Prevention Programme. The other authors have no conflict of interest to report.