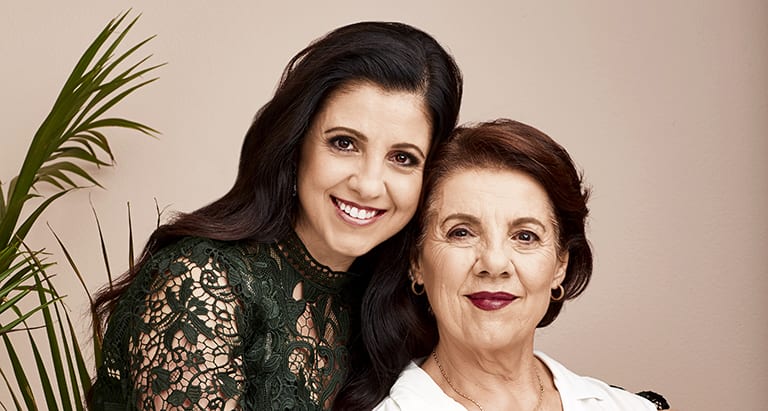 "There’s no way I could have done it without her”

Mother and daughter pair Carolyn and Anne have put stress and grief behind them to collectively lose 39 kilos and emerge healthier and happier.

Carolyn’s top tip: “Remember that your very next move makes  all the difference.”

As one of four siblings, Carolyn Eltakchi, 42, had always assumed she’d follow in her parents Anne and Joe’s footsteps with a troop of her own. But when she reached her early 30s and she and her husband Ray, 42, weren’t having any luck conceiving, blood tests revealed she had a cyst on her pituitary gland.

Like most of us, Carolyn hadn’t ever given much thought to the tiny gland that sits behind the bridge of the nose but she quickly learned it controls everything from the thyroid and adrenals to the reproductive organs, and can have a huge impact on fertility and weight management.

“Suddenly it made sense why I had been gaining so much weight despite the fact that I hadn’t changed my diet,” she recalls. “I’d worked in fashion and always loved clothes but started wearing my husband’s shirts because they were all I could fit into. I had a 10-year phase of not feeling like myself.”

Doctors put her on medication to shrink the cyst and try to restore her fertility but it brought with it serious side effects, including more weight gain, dizziness and vomiting that was so severe she had to quit her job. “It was a bleak time – I wasn’t happy at all,” Carolyn says. “I was caught up in having a pity party.”

The whole family fretted, especially after further testing revealed that Carolyn and Ray wouldn’t be able to have children. “She has always been a meticulous dresser, so when she started wearing her husband’s shirts, I knew she was really not herself,” Carolyn’s mother Anne Younis says.

By the time Carolyn got off the meds, she was carrying about 21 extra kilos and quite depressed about her future. “There was no reason I couldn’t lose weight, but I was thinking, ‘Poor me, poor me’,” she says. “I was comfortable whinging about it and not really doing anything.”

It took the harsh words of her then-11-year-old niece Emma to change everything. “She kept hearing me say, ‘I want to lose this weight’, and she just said, ‘Suck it up, princess – get on with it!’” Carolyn says with a laugh. “It was what I needed to hear.”

Carolyn got serious about Weight Watchers in 2007 and realised that while the medication had sparked the weight gain, it was up to her to bring the number on the scales back down. “I was eating the same size meals as my husband, but he’s much bigger than me,” she admits. “It was a matter of getting in touch with my satisfaction levels again and understanding that I didn’t have to eat until I was stuffed.”

Tracking made all the difference. “When you note it down, you start to realise just what foods make you feel fuller for longer,” she says. “You see it all laid out and you see the little tricks that made you full and satisfied.”

Carolyn started working for Weight Watchers, assisting with weighing members, which was a great confidence boost, and by July 2009 she had reached Goal and been promoted to a Coach. Everything started looking up.

“Not having children has meant Ray and I get to travel the world and it’s allowed me to dive deep with my role as a Coach,” she says. “And I’ve got nieces and nephews that fill the void – but I get to pass them back to their parents!”

Inspired by her daughter

Watching Carolyn bloom from being overweight and depressed to becoming a Coach was just the ticket Anne needed to lose the 18kg that had crept on since she’d been rocked by her mother’s untimely death. “My blood pressure had started going up and my doctor was threatening to put me on blood pressure tablets,” Anne recalls. “I really had to think about where I was heading and then Carolyn became a Coach – it was just the right time for me.”

Anne had tried Weight Watchers before but struggled to attend meetings, but with her daughter at the helm, her motherly instincts kicked in. “I came to help her set up and stayed for the meetings,” Anne says. “I was so proud and thought the best gift I could give her was to also be a role model so that her members would see me as a living example of what she was preaching.”

Instead of thinking of meetings as a chore, Anne had the rare opportunity to witness her daughter flourish in her career. “Carolyn is my third child and was always the quiet one,” she says. “Now here she was, standing up and talking to people who were taking in everything she said – my heart was about to explode with pride seeing her up there so confident.”

How we celebrate Mother’s Day

Carolyn and her siblings always take Anne out for a Mother’s Day lunch – only these days, they check the menu first. “It will be a special day out but we will know what we’re going to order before we get there,” Carolyn says. “We tend to let up a little on our birthdays but we just know that the choices we make most of the time are making all the difference to our health.”

Back to the Daily Feed
Hurry, ends soon!