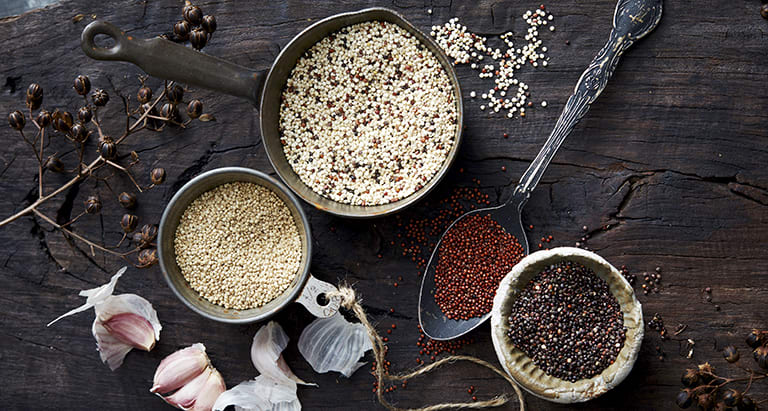 How to cook quinoa

Everything you need to know about cooking quinoa with step by step instructions.

Packed with protein and fibre, quinoa (say “keen-wah”) has a sweet, nutty flavour. Because it’s a seed, not a grain, it’s great for gluten-free cooking but to prevent any quinoa faux pax, just follow these top tips.


Quinoa is considered a superfood because it’s the only known plant-based complete protein, which means it contains all nine essential amino acids your body needs for growth and development.


White
White quinoa is the most common and is softer and fluffier when cooked than other types. It also has a slightly milder flavour. It’s a good choice for making porridge, adding to soup and making pie bases or patties (as it sticks together well).

Red
Holds its shape and crunch after cooking a bit better than white quinoa. This makes it more suitable for cold salads or other recipes where a distinct grain is required.

Black
Has an earthier flavour than white quinoa. It keeps its shape and crunch when cooked and is used for its striking colour.

Tri-colour
A pretty blend of all three types of quinoa. Great for salads or a side dish as it provides a combination of colours and textures.


Quinoa can be cooked in large batches and then frozen for up to 3 months. Simply allow to cool, then divide into meal-sized portions and place in snap-lock bags. Press flat and expel all the air before sealing. Thaw overnight in the fridge or defrost in the microwave.


For a really simple side dish, drizzle ½ cup cooked quinoa with ½ teaspoon each of lemon juice and olive oil. Season with salt and pepper for 4 SmartPoints per serve.