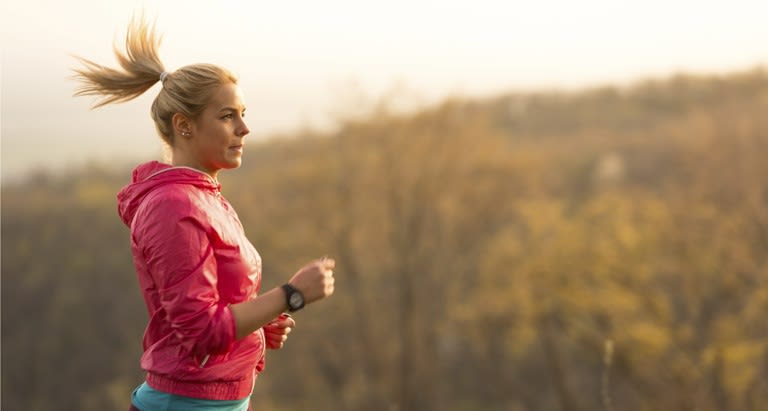 Now that digital pedometers are suddenly everywhere—fitness trackers, apps, smartwatches, attaining 10,000 steps a day has become a bit of an obsession. As silly as it may feel to find yourself pacing up and down your hallway late at night to get those last few 100 steps, it's more than a game. A 2017 study showed that when it comes to losing weight, reaching 10,000 steps a day is just as effective as doing five 30-minute workouts a week.

A 2017 study showed that when it comes to losing weight, reaching 10,000 steps a day is just as effective as doing five 30-minute workouts a week.

Consistent daily activity nourishes nearly every system in your body. A study published in the journal Comprehensive Physiology found that 35 different chronic health conditions are accelerated by physical inactivity. They range from heart disease and stroke to depression and constipation. Here are a few specific benefits you miss when you don’t get those daily steps.


Someone who gets 10,000 steps a day will have a bigger stroke volume—how much blood the heart pumps per beat—compared with someone who gets 1,000 steps a day. “A larger stroke volume is a sign of greater aerobic capacity,” says John Thyfault, PhD, associate professor of physiology at Kansas University Medical School in Kansas City, Kansas. “Aerobic capacity is arguably the best predictor of mortality and disease risk.”


Calories eaten by someone who gets 10,000 steps a day do not travel the same path when they’re consumed by an inactive person. Thyfault has performed studies that shows when someone who exercises regularly eats that food is used differently by the body to fuel key systems compared with an inactive person. In someone who is habitually physically inactive, however, those calories are more likely to be stored as fat or in the muscle or liver. Evidence shows that habitual exercisers are also better able to handle those inevitable periods of excess—splurges like Thanksgiving Day, for example—without gaining as much weight.


Let’s say Thyfault is out to dinner with two friends: one gets 10,000 steps a day and the other gets 1,000. With a simple glucose monitor, Thyfault would be able to determine the identity of the highly active person and the physically inactive person, and figure out who is at greater risk of type 2 diabetes.


The ability to learn new tasks, grow new brain cells, and stave off cognitive decline are all aided by daily moderate exercise. A study in the journal Current Biology showed that just one bout of exercise enhanced the brain’s ability to reorganize, repair, and adapt to new situations. Aerobic exercise, such as walking, may also spur new cell growth in the hippocampus, the area of the brain that regulates emotion and memory, according to a study done on rats that was published in The Journal of Physiology.


There is one difference between a stepper and non-stepper that can’t be seen on a glucose monitor, brain scan, or electron microscope: strength of will. Small successes build upon themselves. If someone got 10,000 steps yesterday and the day before, they are more likely to hit that mark again the following day.

“The whole 10,000 steps model is based upon making movement part of a normal routine where it wasn’t there before. It facilitates behavioral change,” says Brian Richardson, MS, NASM-PES, co-owner of Dynamic Fitness in Murrieta, CA, and associate professor of exercise physiology at nearby PGCC junior college. “When it comes to weight loss, behavioral change is dependent upon creating habits.”