How This Married Couple Lost a Total of 91 Pounds*

The success of these high school sweethearts proves WW is #bettertogether.
By Katerina Savvides

High school sweethearts Emily and Josh D. of Longview, Washington, began dating when they were 16 years old. Now that they're both teachers and the parents of three daughters (ages 6, 4, and 1), the WW members have become WW Coaches. They recently received a surprise call from fellow member Oprah Winfrey, who described the duo as a “hot” couple. “We’re never going to forget that moment!” Emily says.

WW caught up with the couple to find out how they met their weight loss and wellness goals, shedding nearly 100 pounds combined:

WW: When did weight become an issue for each of you?

Emily: After our second child was born in 2014, I was having trouble losing the extra weight I had gained during pregnancy. In addition to the challenges of taking care of two kids, sitting on the floor to change my daughter’s diaper felt laborious, and I noticed myself running out of breath every time I'd try to run alongside my 3-year-old. I knew I had to do something.

Then, in the fall of 2016, I went to a doctor for a toe injury and saw “obese” written on my chart. Because I’d never struggled with my weight before, the label was jarring. Around the same time, I saw a photo of myself at a friend’s wedding and didn't like the way I looked. Shortly after, I went to my first WW Workshop with a WW member I knew.

Josh: Even though Emily was making changes, I wasn’t ready to join WW—at least at first. I figured, that because I’m a guy, I’m supposed to be big. At the same time, I still ate whatever she cooked and wanted to support her.

E: I was grateful for that! At Workshops, you hear members talk about spouses who say they’re supportive, but then they bring home doughnuts. Luckily, Josh didn’t do that, and I was able to hit my goal in five months. A few months later, I got pregnant with our third child. While it was difficult to see my weight go up, I kept reminding myself that I’d get back on track after I had the baby.

J: Around that time, our oldest daughter, who was 5 years old, said to me, “Daddy—you’re not very straight....your body is round.” While I knew I was gaining weight, I hadn't realized it was noticeable until my daughter pointed it out. What's more, I didn’t feel my best and would get winded from playing outside with our kids. I vowed to go to Workshops with Emily after the baby was born, and in May 2018, we walked into the Studio together.

E: While I love everything about him, I was ecstatic when Josh told me he wanted to join! After my last pregnancy, I was determined to get back to my goal weight and I was so excited we were doing this together.

J: Luckily, my mom comes and watches the kids every Saturday morning so Emily and I can go to Workshops. The girls have time with Grandma, and we can do WW as a team. 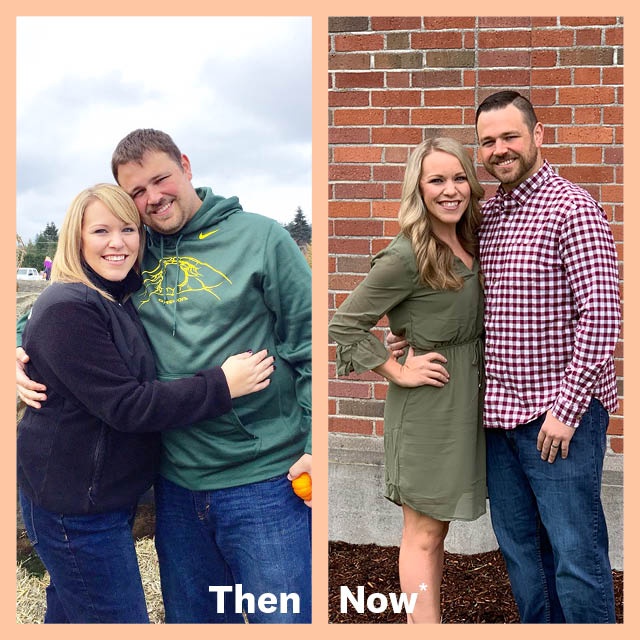 WW: What did you think of your first WW Workshops?

E: It was rare to find a community of like-minded people striving for similar goals sitting together in one room. Early on, a member who spoke about a recent weight-loss milestone she'd achieved broke out into tears as she spoke. I thought to myself, “How amazing is it that there’s such a safe place where it’s OK to let yourself be vulnerable?” I left the WW Studio feeling really positive about starting my journey.

J: At first, I worried about having to talk about my feelings in group discussions; society tells us this isn't "manly." But when I met my WW Guide and the WW Coach, I felt more comfortable. While I was shy during my first Workshop and opted not to contribute—which is totally fine—I knew I was in the right place. It helped to have Emily cheering me on, too.

The following week, I opened up and asked for advice on healthy salad dressing ideas, resulting in a tip I totally ran with: The healthier options are in refrigerated in the produce section. I use a light jalapeno ranch dressing I found there to this day!

WW: What were some of the first changes you each made on the program?

E: Before joining, I’d get a large iced caramel white mocha with whipped cream every morning. When I looked it up on the WW App I found out it was 35 SmartPoints®. I was eating more than my daily SmartPoints budget for breakfast!

In a Workshop, I asked other members for advice. When one suggested mixing two shots of espresso with a protein shake that only had two SmartPoints, I tried it. It was delicious!

J: I started to pay more attention to the kinds of groceries we bought when Emily first joined the program—we'd use the WW App barcode scanner while we shopped. But I still had a few habits that weren’t ideal: I guzzled up to eight cans of soda every day and ate two hoagie sandwiches for lunch. When I began following the program, I cut back on drinking regular soda and started to rely on the ZeroPoint™ foods to stay full. So if I’m hungry for a snack, I’ll grab an apple, banana, or pepper strips instead of eating a bag of potato chips.

WW: Have you picked up any other habits on your journey?

E: I started to exercise when I joined the program in 2016. Although I decided to train for a 5K, after my first day of alternating between running for 30 seconds and walking for 2 minutes, I wondered how I'd ever run a full mile. Eventually, I got there and even signed up for a half-marathon four months later.

J: I was already a gym member when I joined WW, so I started working out more often. I also worked up to running a 5K every morning on the treadmill, then started running outdoors like Emily. Now we take turns watching the kids so we can each run a 4-mile loop around a lake by our house on most days.

WW: What keeps you motivated?

J: We constantly remember our “why” and that helps us keep going: Our daughters look up to us. We want to show our girls a healthy lifestyle so they don’t have to struggle like we did. And we want to be around for a very long time.

E: It’s a hard balancing act because we want to make sure to teach them to have a positive body image without worrying about their weight. We talk about “anytime” foods like fruits and vegetables, and “sometimes” foods like pizza or dessert. They’re starting to notice that we have healthy habits, and they love that their parents that can keep up with them.

*People following the WW program can expect to lose 1-2 pounds/week. Emily lost weight on a prior program and continued on WW Freestyle™. Emily & Josh are WW Coaches.