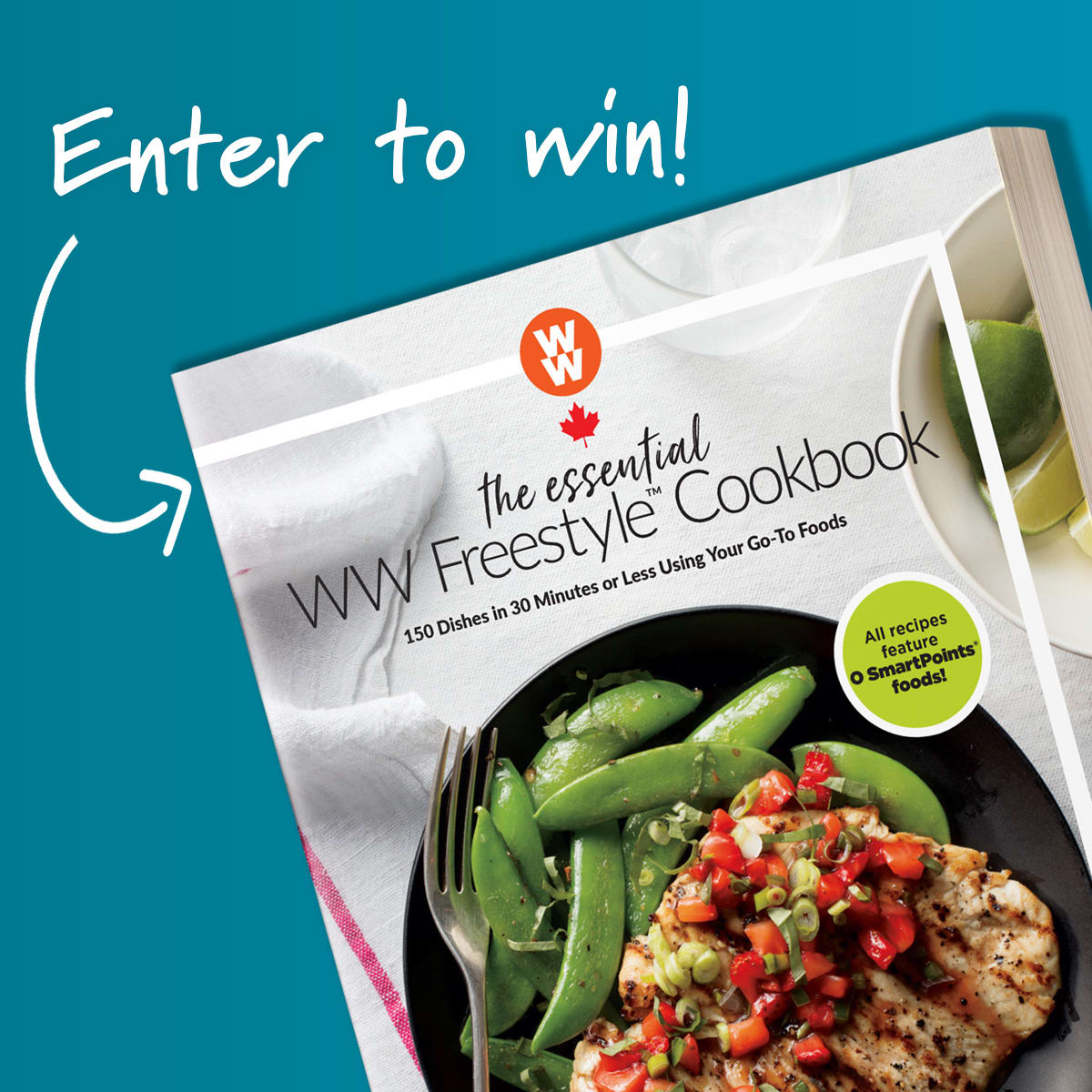 NO PURCHASE NECESSARY TO ENTER OR WIN. The Weight Watchers Canada ‘Just Watch Me’ Contest (the “Contest”) begins December 12, 2017 at 12:01:00 a.m. Eastern Time (“ET”) and ends on December 18, 2017 at 11:59:59 p.m. ET (the “Contest Period”). The Contest is run by Weight Watchers Canada (the “Sponsor”). For the purposes of the Contest, the “Contest Group” is composed of the Sponsor, together with its respective affiliates and related companies, including without limitation their parent, sister and subsidiary companies, retailers, franchisees, advertising and promotion agencies, suppliers of material and services related to the Contest, and any other corporation, partnership, sole proprietorship or other legal entity directly involved in the Contest and their respective officers, directors, employees, agents, and other representatives.

ELIGIBILITY The Contest is open to legal residents of Canada (excluding those residing in the province of Quebec), who are eighteen (18) years of age or older as of the date of entry with have a valid Facebook account. Excluded from eligibility are officers, directors, employees, agents and representatives of the Contest Group, any independent contest judging organization, each of their respective parent, affiliated and related companies, agencies, suppliers of the materials and services related to this Contest, and members of any immediate families (defined as parents, siblings, children and spouses, regardless of where they live) or households (whether or not related) of such officers, directors, employees, agents and representatives.

HOW TO ENTER & WIN NO PURCHASE NECESSARY. Visit the Sponsor’s Facebook page (www.facebook.com/wwcanada), and comment on the contest post (linked here) with the name of a recipe that features a zero Points food® to be entered for a chance to win. Entrants can earn an additional entry by ‘Liking’ the post and can also earn an additional entry by ‘Liking’ the Sponsor’s Facebook page (www.facebook.com/wwcanada). These three methods comprise the three valid methods of entry for this contest. On December 19, 2017 at 10:00 a.m. ET in Oakville, ON, ten (10) entries will be randomly selected and the entrant who submitted it (the “Selected Entrant”) will be eligible to win the Prize (see below). Limit of one entry, per method of entry, per person during the Contest Period for a potential total of three entries per entrant.

PRIZE CLAIM CONDITIONS In order to be declared a winner, individuals eligible to win a prize must: (i) for eligibility to win the Prize, respond to any notification from Contest Sponsor within three (3) business days; (ii) and correctly answer a time-limited mathematical skill-testing question.

Return of any prize or winner notification as undeliverable, inability to reach selected entrant or failure of selected entrant to respond to notification within three (3) business days of first attempt by Sponsor or Sponsor’s agent, failure to provide proof of eligibility (if requested), release documents, or other required documentation in a timely manner, failure to correctly answer the skill-testing question, or other non-compliance with these Official Contest Rules may result in disqualification, forfeiture of the Prize and, at Sponsor’s sole discretion, selection of an alternate eligible entrant for the forfeited prize in accordance with these Official Contest Rules, who will be subject to disqualification in the same manner.

PRIZE There are ten (10) prizes available to be won consisting of one copy of The Essential WW Freestyle™ Cookbook (the “Prize”). Odds of winning the Prize depend upon the number of eligible entries received.

Prize will be awarded only to a verified winner in Canada, excluding residents of the province of Quebec. Prize must be accepted as awarded and may not be substituted, transferred or redeemed for cash or otherwise. Sponsor reserves the right, at its sole discretion, to substitute a prize of greater or equivalent monetary value if the Prize cannot be awarded as described for any reason. Sponsor will not replace any lost or stolen prize. Any other taxes, costs or expenses associated with the continuation of the prize past the prize period (one year) not specified herein will be the responsibility of selected winners, as dictated in the Prize Claim Conditions.

PERSONAL INFORMATION By accepting the Prize, winner agrees to Sponsor’s use of his/her name, city/province/territory of residence, picture, biographical information, statements, voice and likeness in any advertising and publicity Sponsor may conduct relating to the Contest in any media or format, whether now known or hereafter developed, including but not limited to the World Wide Web, at any time or times in perpetuity, without further compensation or notice. For further information about Sponsor’s privacy practices, please see Sponsor’s Privacy Policy at: https://www.weightwatchers.com/ca/en/privacy_policy

NOT ENDORSED BY FACEBOOK: By participating in this contest, you acknowledge that this contest is in no way sponsored, endorsed or administered by, or associated with, Facebook and release Facebook from any and all liability arising from or related to this contest.

RIGHT TO VOID / TERMINATE / SUSPEND / MODIFY Sponsor reserves the right to terminate, suspend or modify this Contest, in whole or in part, at any time and without notice or obligation if, in Sponsor’s sole discretion, any factor interferes with its proper conduct as contemplated by these Official Contest Rules. Without limiting the generality of the foregoing, if the Contest, or any part thereof, is not capable of running as planned for any reason, including but not limited to infection by computer virus, bugs, tampering, unauthorized intervention, fraud, programming errors, or technical failures, which, in the sole discretion of Sponsor, corrupt or affect the administration, security, fairness, integrity or proper conduct of this Contest, Sponsor may, in its sole discretion, void any suspect entries and: (a) terminate the Contest, or any portion thereof; (b) modify or suspend the Contest, or any portion thereof, to address the impairment and then resume the Contest, or relevant portion, in a manner that best conforms to the spirit of these Official Contest Rules; and/or (c) award the Prizes from among the eligible, non-suspect entries received up to the time of the impairment in accordance with the winner selection criteria discussed above.

GENERAL CONDITIONS Winning a prize is contingent on fulfilling all the requirements set forth herein. Mass entries, automated entries, entries submitted by third parties, and any entries or prize claims that are late, incomplete, fraudulent, illegible, unidentified or delayed will be void. All entries and prize claims are subject to verification. Proof of entry submission does not constitute proof of receipt. Entrants agree to abide by these Official Contest Rules. Decisions of Sponsor and/or any independent contest judging organization will be final and binding on all matters pertaining to this Contest. Contest is subject to all applicable federal, provincial, territorial and municipal laws. Void where prohibited. Sponsor reserves the right to correct any typographical, printing, computer programming or operator errors. Sponsor’s failure to enforce any term of these Official Contest Rules shall not constitute a waiver of that provision. The invalidity or unenforceability of any provision of these Official Contest Rules shall not affect the validity or enforceability of any other provision. If any provision of the Official Contest Rules is determined to be invalid or otherwise unenforceable, then the Official Contest Rules shall be construed in accordance with their terms as if the invalid or unenforceable provision was not contained therein. Should a winner make any false statement(s) in any document referenced above, the winner may be required to promptly return to Sponsor his/her prize, or the cash value thereof. Sponsor reserves the right at its sole discretion to disqualify any individual who tampers or attempts to tamper with the entry process, the operation of the Contest and/or Contest Website, violates the Official Contest Rules, or acts with intent to annoy, abuse, threaten or harass any other person. WARNING: ANY ATTEMPT BY AN ENTRANT OR ANY OTHER INDIVIDUAL TO DELIBERATELY DAMAGE ANY WEBSITE ASSOCIATED WITH THIS CONTEST OR UNDERMINE THE LEGITIMATE OPERATION OF THE CONTEST IS A VIOLATION OF CRIMINAL AND CIVIL LAWS, AND SPONSOR RESERVES THE RIGHT TO PROSECUTE AND SEEK DAMAGES TO THE FULLEST EXTENT PERMITTED BY LAW.

Without limiting the foregoing, the Releasees, and any of Sponsor’s other agencies, suppliers or contractors, shall not be responsible for: (a) any incomplete or inaccurate information that is caused by Contest Website users, or by any of the equipment or programming associated with or utilized in the Contest, or by any technical or human error which may occur in the processing of submissions in the Contest; (b) lost, interrupted, or unavailable network, server, service provider, on-line systems, telephone networks or telephone lines, or any other connections; (c) the theft, destruction, loss or unauthorized access to, or alteration of, entries; (d) any problems with, or malfunctions or failures of, telephone networks or lines, computers or computer on-line systems, servers or providers, computer equipment, software, viruses or bugs; (e) garbled transmissions or miscommunications; (f) failure of any e-mail to be received by or from the Contest judging organization or Sponsor for any reason, including but not limited to traffic congestion on the Internet or at any website or combination thereof or technical incompatibility; (g) damage to a user’s computer equipment (software or hardware) occasioned by participation or downloading of materials related to this Contest; (h) printing, distribution, programming or production errors, and any other errors or malfunctions of any kind, whether human, mechanical, electronic or otherwise; or (i) technical, pictorial, typographical or editorial errors or omissions contained herein.