“The Weight I Lost With WW Kept Me Alive”

In October 2007, 29-year-old Susan E. of Oshawa, Ont. was celebrating getting back to her pre-pregnancy weight after having two children in three years when everything changed. Within a matter of hours, Susan went from regular workouts at her local gym to having her appendix removed and suffering four cardiac arrests within six hours.

The day everything changed started out like any other. I dropped my kids off at daycare and headed to work. By mid-afternoon, I was having intense chest pains. I closed my office door and continued to work through the pain and even picked my kids up from daycare at the end of the day. My husband was working an overnight shift, so I fed the kids and got them ready for bed, all while the awful chest pains continued. At 3 a.m. when the pain became unbearable, my husband came home and took me to the hospital. The doctors said it was my appendix, so I waited in the emergency room all day and had it removed at six o’clock that evening.

The next morning, I felt better but I still had pain, but I was told it was post-surgery pain. When the surgeon came around for his post-surgery visit, he told me to take it easy for two weeks. After he left the room, I had my first cardiac arrest. After 45 minutes and 15 shocks with a defibrillator, I was resuscitated but would go on to have three more cardiac arrests within the next six hours.

My life was turned upside down. I had so many emotions going on. My kids were 1 and 3 years old at the time, and I had no idea what the future held. The doctors eventually diagnosed me with Prolonged QT Syndrome (LQTS) and a defibrillator was implanted in my chest. I was told I couldn’t return to work because my job in sales was too stressful and required a lot of long hours.

LQTS is a disorder of the heart’s electrical system that controls the speed and rhythm of your heart. It can be an inherited condition or triggered by medication or an event. In my case, the doctors suspected it was congenial but laying dormant until it was triggered by the trauma of my appendix surgery.

Over the next couple of years, I averaged one surgery every six months as my body rejected the defibrillators and the surgeons worked to keep the wires running through my heart in good condition. My life completely changed. I started to turn to food for comfort. I figured my heart could stop at any time so I’m eating whatever I want. That attitude, combined with my heart medication, was a disaster. I gained a ton of weight!

About two years after receiving my LQTS diagnosis, I started volunteering with the Heart & Stroke Foundation delivering speeches to share my experience and educate about the difference between a heart attack and a cardiac arrest. A heart attack is when the flow of blood to part of the heart muscle gets blocked. A cardiac arrest is when the heart suddenly stops beating.

In 2016, I was educating people about heart disease and how important a healthy lifestyle is, but I wasn’t taking care of myself. One day, I went into my local WW Studio to see if they’d be interested in participating in a Big Bike ride to help fund research for heart disease. After hearing that I had done WW in the past, Coach Angie made me a deal: if I joined WW, she’d do the Big Bike ride. The next day, I joined WW.

As I started tracking my food, I realized I wasn’t eating “bad” food, I was just eating too much. With WW, I was able to eat the things I enjoy. I had Dairy Queen every Saturday after my weigh-in! Instead of having a Peanut Buster Parfait, I had a small hot fudge sundae and felt completely satisfied. My family was able to eat the same meals I prepared for myself so I didn’t have to make three different meals.

When it comes to activity, living with a defibrillator means I have to be careful not to over-exert myself. I can’t just go from a long run or walk and then stop, that’s when my heart will stop. Instead, I have to gradually slow down and give my heart time to adjust. Fortunately, I’ve found some low-intensity workouts that I enjoy and can safely do. 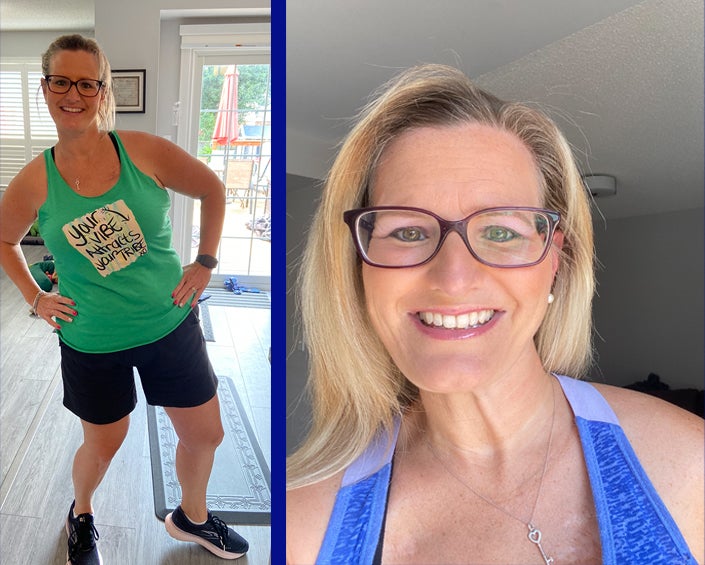 "After a recent surgery to replace my defibrillator, my doctor said the weight I lost with WW kept me alive. "

In October 2017, I achieved my goal weight and became a Coach at my local WW Studio.

WW has taught me that there is so much more to weight loss than just the scale. It’s about your overall health which includes eating foods that fuel your body, being active, focusing on your mindset, and getting enough sleep.

After a recent surgery to replace my defibrillator, my doctor said the weight I lost with WW kept me alive.

Heart disease is a leading cause of death in Canada. Learning how to eat properly was key to my survival. My heart disease issues are electrical - something you would never see or feel.