It Takes a Community

In March 2020, Sabine Daniel decided that she wanted to conceive a baby by insemination, but she had two major obstacles: she had non-cancerous fibroid tumours in her uterus and needed to lose weight to increase her chances of a successful insemination.

Knowing that she had lost weight twice before in 2007 and 2017, Sabine’s nutritionist suggested she do what she did before.

“I don’t even need to be here because you’ve done it before,” Sabine recalls the nutritionist saying. “Go back on WW and we’ll check in again in four months.”

Almost 18 months later, Sabine has lost weight and is now a WW ambassador. Her fibroids have shrunk to half of their original size and she’s hoping to start the insemination process this fall.

Wellness and Life in the Public Eye

An award-winning French TV and radio personality and wellness influencer, Sabine is used to life in the spotlight. People notice when she’s gained weight, and they also notice if, when, and how she loses that weight. So, when she decided to become a WW ambassador, she knew people would be watching to see how quickly she lost weight and whether her approach was sustainable.

“I became an ambassador to always have a connection.” She explains. “I’m accountable to myself and to the people that follow me. This summer people saw the difference in my face and in my body.”

Losing weight, and keeping it off gave Sabine the confidence to share a photo of herself in a bathing suit on Instagram – something she has never done before.

Community in the Palm of Your Hands

“There are a lot of cool tools on the app. Meditation, messages, videos – it’s a one stop shop that allows you to have video workouts, coaches, friends, and tracking all in the palm of your hands,” Sabine says of the award-winning WW app. “You have a support system because sometimes your friends and family don't understand what WW is all about, so it helps to have a support group that can go anywhere 24/7.”

Through the app, Sabine has connected with Caribbean, African, and Francophone communities. That’s how she met her WW bestie and fellow WW ambassador, Tracy Pysadie.

“What I like about her is she inspires me. Unlike me, she likes to cook, and she inspires me to try new WW recipes.” Sabine says of Tracy, who she recently met in real life in Ottawa. “We are able to exchange on some of our realities as Caribbean girls.”

Tracy and Sabine are currently doing a Walk to Run challenge that was influenced by Sabine’s other WW bestie, John, one of the Aaptiv coaches who leads on-demand workouts in the WW app.

When Sabine first started WW, her doctors told her to ease into physical activity as her heart wasn’t able to pump blood as quickly as it used to because of the blood lost as a result of the fibroids. So that’s how she ended up meeting John.

“Meditation and walking with John were the only things I could do around that time,” she recalls. “John is my imaginary wellness boyfriend. I want to meet John one day. I know his voice. I would recognize him anywhere.”

How do you make rice and peas SmartPoints-friendly without halving the serving size?

Rice and peas is a popular dish within the Caribbean community. It’s typically made with rice, pigeon peas or kidney beans, coconut cream and various herbs and spices. For Sabine, connecting with other members of her community within the app has meant trading tips and getting  answers to questions like the above rice and peas conundrum, to which the perfect solution came from her WW BFF, Tracy.

“Tracy combines rice with cauliflower. Instead of having all rice, she mixes in cauliflower to lower the point value and make it healthier,” explains Sabine. It’s shared experiences and tips like this that have made the various communities so valuable. Through these groups Sabine has also discovered WW recipes that have become favourites among her family from Miami to Quebec City. 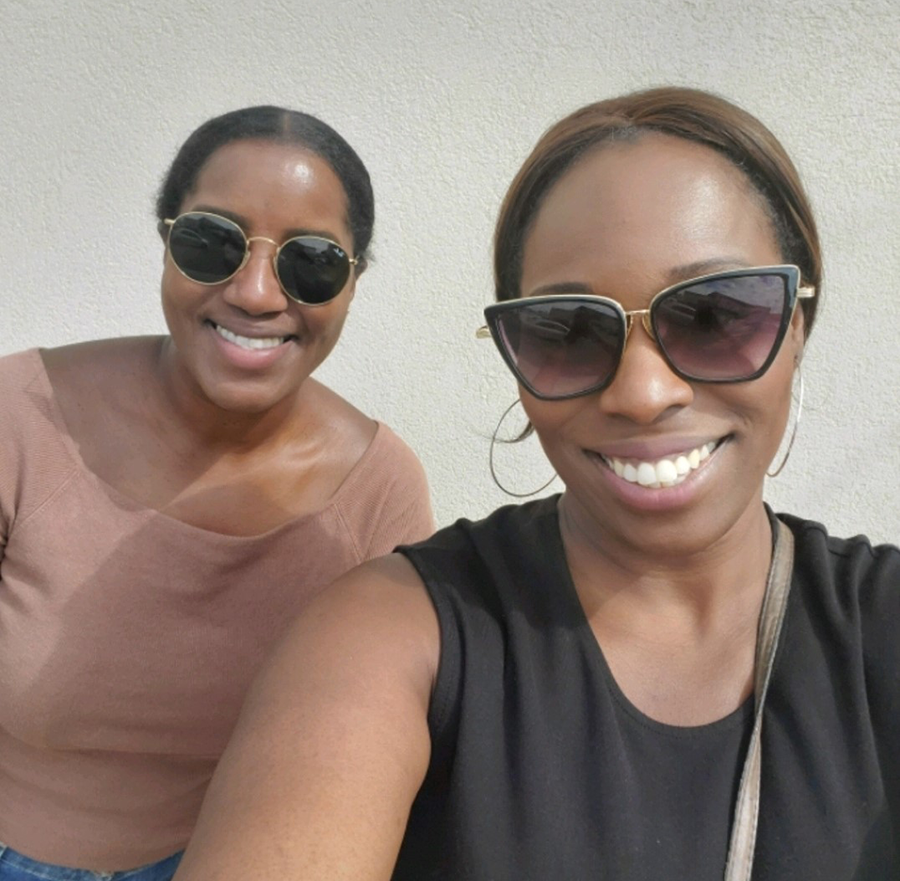 Tracy and Sabine in Ottawa

“The WW pizza with eggplant – my mother has mastered it! We add a Haitian twist on it… we add lean turkey or pepperoni and Haitian spices,” says Sabine.

Not a fan of excess but still very passionate about food, Sabine enjoys the fact that being successful on WW doesn’t mean giving up the foods that she loves.

“WW is respectful of who you are. Meaning if you like chocolate, you can eat chocolate. You just won’t eat as much chocolate. People think they are going to be deprived but it’s just everything in moderation so you can achieve success,” explains Sabine.

Sabine’s Day on a Plate 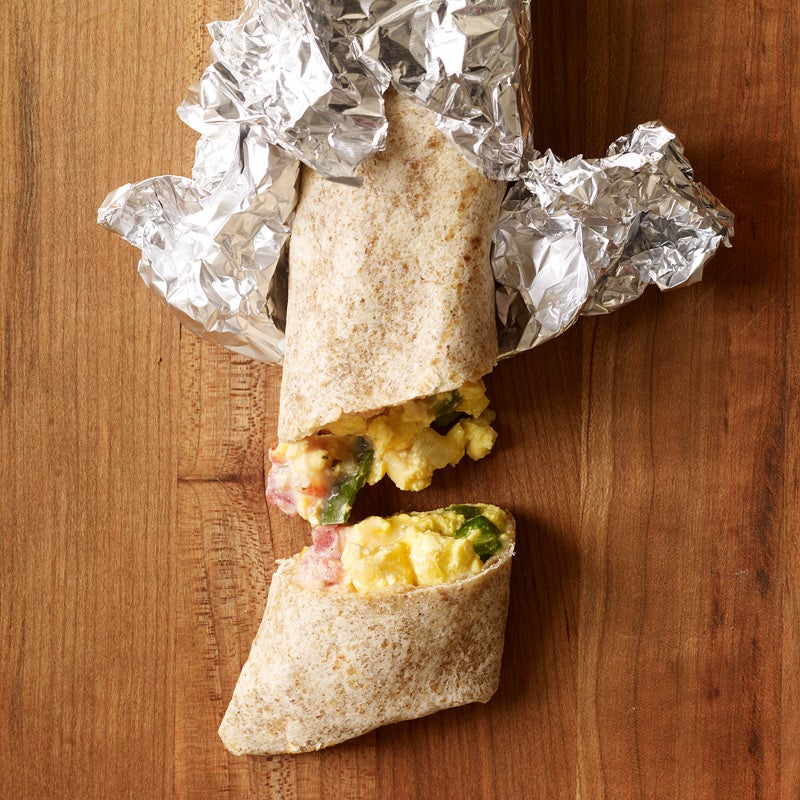 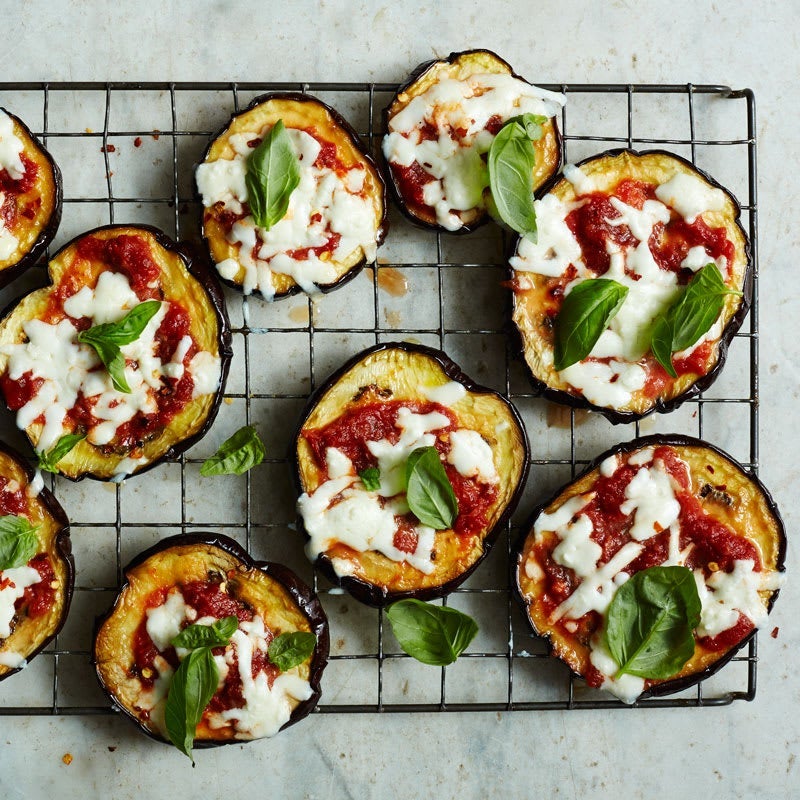 Crispy salmon with warm fresh lentil salad or with rice and peas mixed rice with cauliflower. 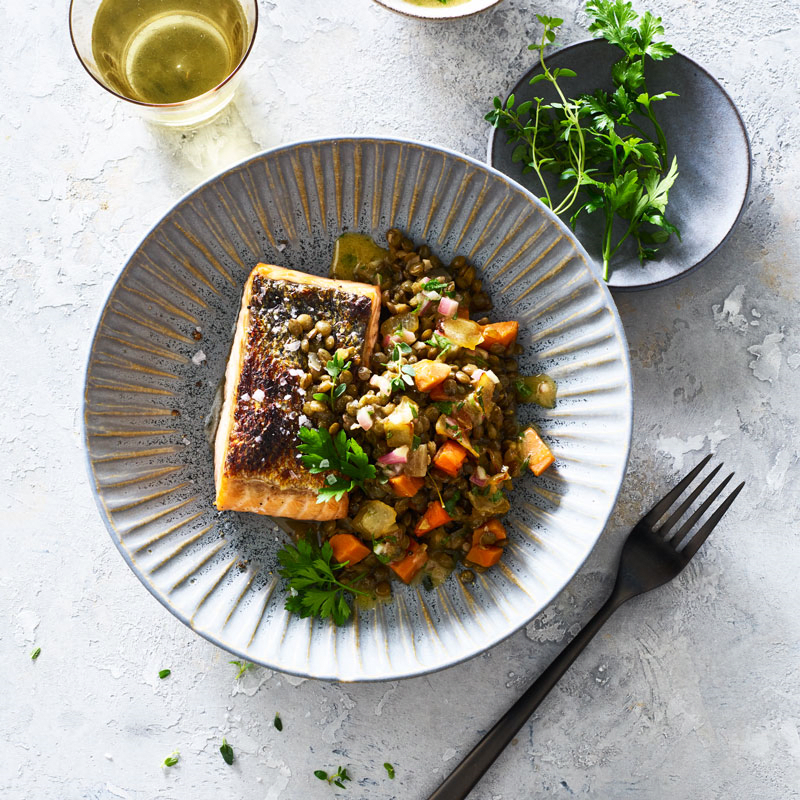