In August 2020, in the middle of the COVID-19 pandemic and while still mourning the passing of her sister, Doris, from cancer, Jessie joined WW.

“I think it was just out of desperation,” explains Jessie. “I was up to 252 pounds and I could hardly move.”

Jessie had struggled with weight for much of her adult life and had tried various diets over the years.

“I tried everything, like absolutely everything. I went Paleo and lost weight, but as soon as I started eating [regularly] again, I gained the weight back plus 10 pounds. I couldn’t get that extra 10 pounds off and then I tried Herbalife, the same thing. I lost weight but only to a certain point. And then I went with a personal trainer, and that personal trainer had me on protein and I was sick because there were no carbs at all.”

And then in 2018, while looking after her sister, Jessie dislocated her shoulder. During the 18-month wait for the rotator cuff surgery, she lived a very sedentary lifestyle that was only made worse when the pandemic hit and she had to work from home.

Within a month of her July 2020 surgery, and while still recovering, Jessie made the decision to join WW.

Unable to exercise because of her recent surgery, Jessie was reassured by a workshop coach who pointed out that weight loss is typically 80 percent nutrition and 20 percent exercise, so she could focus on tracking her food and still see results.

“I lost weight like right away. I think I dropped 30 pounds just by tracking.”

When Jessie’s weight plateaued, a fellow community member suggested she try making one small change to her routine: walking.

“I started walking around the block and then I just kept increasing my steps and now I’m up to 15,000 steps a day. I kept going to the virtual meetings and just took the topics and techniques seriously.”

Despite her weight loss success, Jessie really hadn’t given much thought to her overall wellness or mindset that is until she attended a WW Presents workshop. She learned about the importance of mindset for weight loss and wellness: that what is in your head is just as important as what is on your plate

Jessie started to explore the mindset pillar of the WW program, and then one week the coach at a workshop shared a video about self-compassion. The video encouraged members to speak to themselves in the same way they would speak to themselves as a child.

“It brought back memories…It was a real turning point for me.”

Jessie is a residential school survivor. She carries painful memories of being removed from her home at six years old and bullied about her physical appearance, her language, and her culture.

“They took us to the residential school and they separated my brother and I. I was six and my brother was five. I didn’t even know my last name. I didn’t even speak English. I spoke my Blackfoot language.” Until recently, Jessie hadn’t shared her story with many people. “I had braids and they cut them off. It was just about survival from there on. We don’t talk about our feelings.”

Thinking about how she would speak to that six-year-old girl was a revelation in self-compassion for Jessie.

Jessie credits her WW community and the techniques she has learned with supporting her in helpful ways to process the news that the remains of 215 children had been found on the site of a former residential school in Kamloops, British Columbia.

To say goodbye to the children, Jessie and a few friends went to a local river, burned sweet grass, and made a tobacco offering while praying for the young lives lost.

In the weeks following her exploration of self-compassion, Jessie began the courageous process of working on herself. Just the prospect of exploring her feelings almost caused Jessie to quit WW.

“It was a week when they were talking about journaling and writing three small things that you’re grateful for … I was thinking to myself, ‘I’m just not wired that way. We don’t talk about feelings.’ So, I was really uncomfortable with that.”

Despite her apprehension, Jessie tried journaling and realized it was actually a helpful tool to reflect on all the wonderful things in her life. Journaling has since become a habit for Jessie. Every morning she makes herself a coffee, sits in the same place, and writes. But there was still more discovery to come.

“I was listening in on a meeting and this lady said she writes down one thing she’s letting go,” in addition to three good things.

Jessie immediately connected with that idea. Her journaling routine has now expanded to include taking a sticky note and writing down one thing she’s choosing to let go of. Every Sunday night, Jessie burns those sticky notes as a way of watching the things she wants to let go of disintegrate. 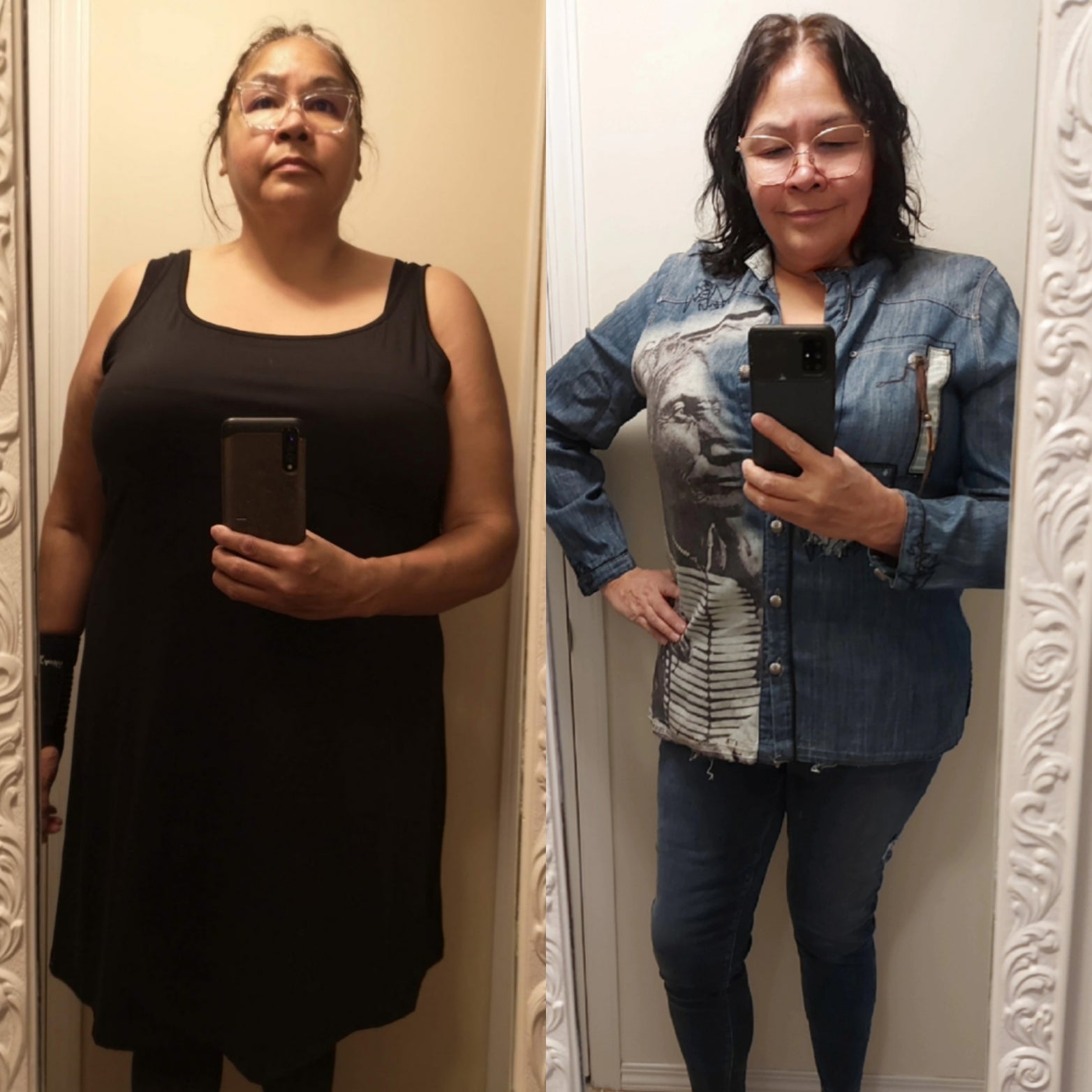 Growing up, Jessie recalls eating a lot of fried foods that were very high in SmartPoints.

“When we gather it's all about food. It's just food, food, food, like from the morning to the night it's just all about food. Fried potatoes and fry bread were big things we ate and a lot of meat,” recalls Jessie, who has been eating a vegetarian diet for the last three years.

Eight months into the WW program, when pandemic restrictions started to ease and Jessie was finally able to visit with her family on the reserve, she decided to try something different.

“I was the one who brought the food… I had bento boxes and I prepared everything and it was good.” Jessie proudly reports that her family enjoyed their WW-friendly meals.

Jessie hasn’t completely given up on the traditional foods that she grew up eating but has found ways to make them fit within her lifestyle.

“The fry bread is in the app,” Jessie notes. “I’ve made it once or twice but just made them half the size… tracking has really helped me with portion control.”

Jessie’s lifestyle change has not gone unnoticed. Her friends are interested in making similar lifestyle changes and Jessie is ready to help in her new role as WW Canada Ambassador.