Skip to main contentSkip to footer
Join now
Join now
How a Canadian couple shed over 100lbs in two and a half years
How this Rockwood, Ontario couple empowers each other’s weight loss through mindset

Ashley and Kevin W. leaned into the WW program and discovered a recipe for happiness, weight loss, and wellness.

Eight years ago, Kevin went to a salon in Acton to get a haircut and met the woman who would become his wife and weight loss and wellness partner.

“That's how we met and she's still my hairdresser,” Kevin says proudly.

In 2019, Kevin, a former recreational hockey player started experiencing knee pain. Two surgeons denied him surgery because they thought it would increase his existing arthritis pain. The day after being denied surgery, Kevin decided to weigh himself for the first time in two years. The scale said 317 pounds. This was a wakeup call leading him to take his health into his own hands. He called Ashley right away. It was time to do what she’d been suggesting for a couple of years.

Having tried WW as a teenager, Kevin had been adamant that he and Ashley knew what they needed to do to lose the weight and could do it on their own without paying for a weight loss program.

“We don’t need to spend the money to do this,” he had told Ashley every time she suggested WW.

Ashley had also tried the program as a teen, but unlike Kevin, she knew the program had changed a lot over the years. With an award-winning app, a digital membership option, on-demand activities, not to mention cool features like a barcode scanner to make grocery shopping a cinch, the program had modernized since their teen years.

“There was a lot of resistance,” Ashley recalls. “I had asked many, many, many times. They've changed the program... it's different from what it used to be.” None of this would convince Kevin.

So when Kevin called that day from work, Ashley was ready to be his WW accountability partner. “It was very exciting to join together.”

Despite different memberships, the couple still enjoys the benefits of being on WW with a partner.

Despite their impressive weight loss, it’s the non-scale victories (NSVs) that have this dynamic duo feeling proud.

“There’s so much more to it than losing two pounds a week,” explains Kevin. “I’m more open and vulnerable than I’ve ever been and that’s a huge NSV.” For her part, Ashley is happy to be working out for longer periods of time, and recently completed a 5K run.

Although Kevin and Ashley signed up for WW together, they are on very different personal journeys. In order to support and hold each other accountable, they committed to learning and understanding each other’s journeys just as much as their own. Having this understanding of their differences has allowed them to grow and support each other.

“We kind of play off each other,” says Ashley.

Ashley’s journey is focused on self love and changing the way she labels food to be more neutral. No more ‘good’ or ‘bad’ food.

“I don’t want to be 70 and still restricting and hating myself, so I’ve been working hard on incorporating food and just feeling very neutral about them, as opposed to stressing about when I'm eating,” explains Ashley. “That's been a big shift for Kevin.”

When Ashley started introducing foods with higher SmartPoints values into their household, Kevin was concerned. And then something shifted in his mindset.

“I realized after a week, that I’m in a place, mentally, where I don't feel triggered by [the food] and I don’t feel like I'm restricting myself.”

Another difference in their approach to weight loss is that Ashley is currently not weighing herself, choosing instead to focus on non-scale victories. While Kevin thrives on knowing and understanding the number on the scale. 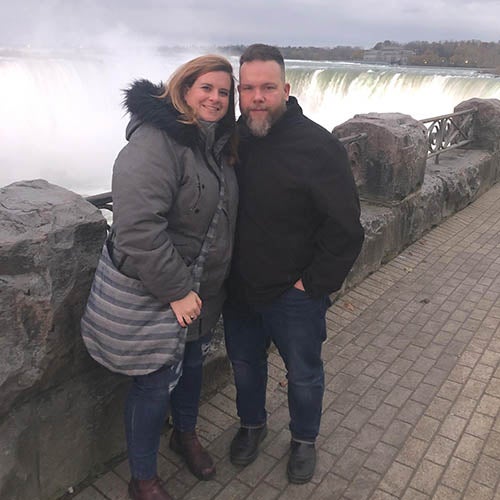 Having a partner on WW means having someone who can objectively appreciate the progress you’ve made. Kevin and Ashley have their individual cheerleading styles.

Ashley calls Kevin a “mindset powerhouse” noting his ability to take something negative and make it positive in order to provide perspective.

Kevin credits Ashley’s mantra of ‘you can’t hate yourself into success’.

Two and a half years into their WW journey, Kevin is able to do a mix of cardio activities such as biking and walking. Ashley is working out more than ever and enjoying a wide range of activities such weight training, running and yoga. WW has become a lifestyle for the couple.

Although Kevin and Ashley joined WW on different memberships, WW offers a referral program, Invite a Friend, where existing WW members can invite their friends.

Members who referred friends lost 29% more than those who didn’t*.