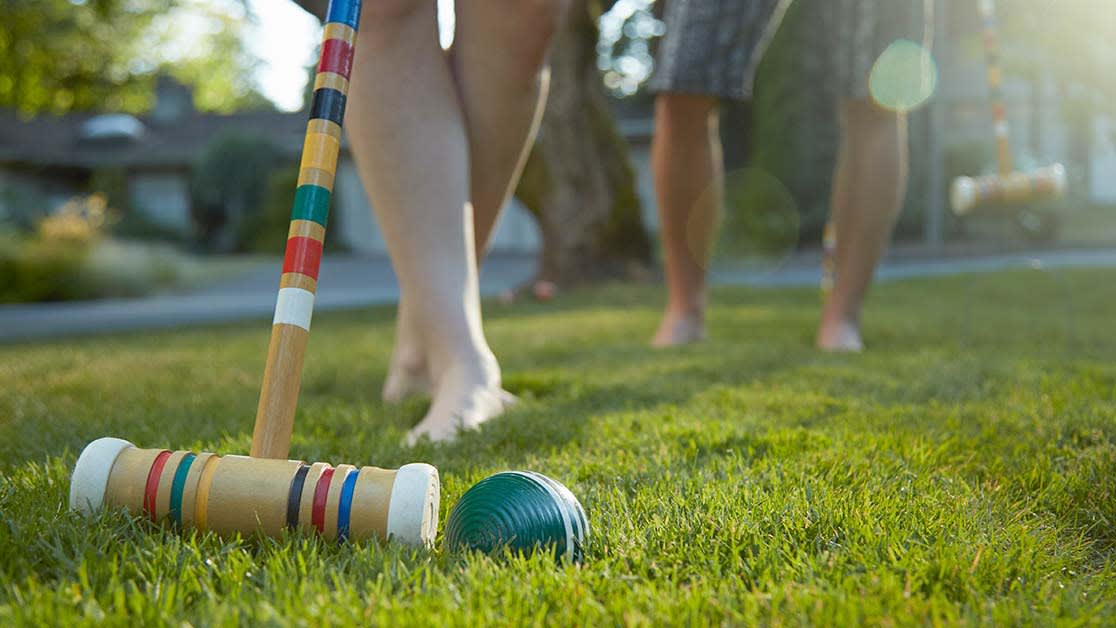 Turn up your summer fun—and stay mindful of safety—with these winning ideas for adults and kids.
Danielle Braff

With many summer attractions temporarily closed to help curb the spread of Covid-19, outdoor gatherings in parks and private yards have emerged as a popular way to socialize and see other humans.

But if talking to pals across your patio is starting to feel like little more than a 3D Zoom call, consider adding some socially distanced lawn games to the mix. Active games can bring a fun element of surprise to your get-togethers and help create new memories to cherish. They also get you moving!

Just know the guidelines for safer play before yelling, “Game on!” As of June 2020, the Centers for Disease Control and Prevention advises maintaining 6 feet of distance from anyone not living in your household, and pulling on a face mask that covers your nose and mouth any time that distance can’t be maintained—even in the great outdoors. If you’ll be in an area that lacks access to soap and running water, carry an alcohol-based hand sanitizer in the event you touch shared surfaces such as play equipment.

Read on for some fun game ideas that foster teamwork and friendly competition without requiring physical closeness.

In this backyard classic, each player tosses bean bags at a raised platform with a hole at one end. Traditional scoring awards one point for landing a bag on the board; three for sinking a bag through the hole. The first person or team to score 21 points wins. That said, creative variations abound—think, mini water balloons instead of bean bags.

Equipment needed: An all-in-one cornhole set offers a simple way to enjoy this beloved pastime. Or, if you’re feeling handy, you could cut DIY boards from plywood and make bean bags filled with popcorn kernels.

Go the social distance: Cornhole is inherently good for social distancing, as game play generally involves two boards, with opposing players facing each other across the pitching expanse. A tip for these times: After each round, leave behind tossed beanbags and rotate player position. This helps reduce shared handling of bean bags.

In this shooting-style game, players aim at each other with handheld blasters that emit a painless beam of infrared light (like that of a TV remote control). In the end, the team with the most “hits” wins. Expect plenty of running, hiding, and excited yelling.

Equipment needed: Laser tag kits vary in their techy complexity—some come with special vests that players must wear to register hits; some include bells and whistles such as night-vision gear. Basic laser blasters that require no accessories can be a good starting point for families and other mixed groups.

Go the social distance: Dodging opponents is the name of the game here, so most players naturally scatter. Traditional rules also prohibit physical contact. For an extra layer of social-distancing safety, consider barring close-range encounters of any kind.

Similar in some ways to miniature golf, croquet entails using a mallet to knock colorful wood balls through a series of wickets staked in the ground. There are plenty of variations on this centuries-old lawn game; one modern riff is “extreme croquet,” which involves setting up the wickets in challenging terrain like mud or overgrown grass.

Go the social distance: Conveniently, croquet etiquette calls for plenty of personal space when players are taking their shots—good manners for good health! Any spectators should space themselves at least 6 feet apart from each other, as well.

You may remember parachute play from your preschool years, but kids aren’t the only ones who love this colorful diversion. Good-for-all-ages games include cooperative challenges like rollerball, in which players try to move a ball along the parachute’s circumference without letting it fall off, and more competitive activities like avoiding “poison snakes” (loose jump ropes jostled on the parachute’s surface).

Equipment needed: A play parachute large enough to accommodate your group. At 20 feet across and nearly 63 feet around, this parachute is suitable for 10 or so people.

Go the social distance: Until Covid-19 abates, avoid games that involve tenting the parachute over players, which could raise the risk of transmission by creating an enclosed space.

Before dragging your empty plastic water bottles out to the curb on recycling day, give them another go...as outdoor bowling pins. (Who knew staying hydrated could inspire such fun?) Refill any 10 bottles of the same size with water, set them on the ground in triangular formation, and you’re ready to rack up strikes. For a fun variation, try soccer-style bowling, kicking the ball to topple the pins.

Equipment needed: 10 bottles of water and a soccer or playground ball.

Go the social distance: As one player bowls, station another near the bottle pins to help retrieve the ball. If multiple players are touching the ball, use hand sanitizer frequently throughout the game.

For some players, badminton is a serious competitive sport. For most, it’s just a fun way to wield a racket. Badminton shares a few fundamentals with tennis—players swat an object back and forth over a net. But instead of balls, badminton uses rubber-tipped birdies (also known as shuttlecocks, shown above). Also, badminton doesn’t require a special playing surface, making it ideal for yards and parks. Every time the birdie lands on your opponent’s side, you get a point. First side to reach 21 points wins, per traditional rules.

Equipment needed: a net, a birdie or two, and a racket for every player. This portable set comes with a special net designed for speedy setup on multiple surfaces, as well as fun light-up birdies for matches that stretch past sundown.

Go the social distance: The net is a natural barrier that helps to socially distance opposing sides. If you’re playing doubles, try to form teams with members of the same household.

Danielle Braff is a freelance health and lifestyle journalist in Chicago. Her writing has appeared in The New York Times, Chicago Tribune, Prevention, Health, Self, and many other outlets.