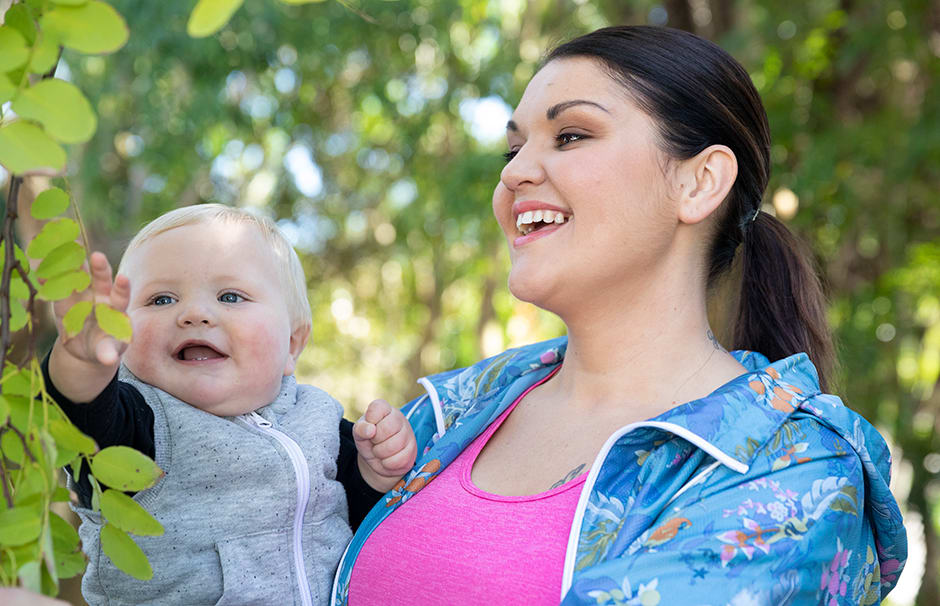 Pregnancy and a healthy weight: What you need to know

Find out how to deal with pregnancy weight in a healthy and effective way.

What really happens after you've had a baby?

Another day, another celebrity mum photographed a month after birth looking as though she hasn't just grown a small human for nine months. Baby weight – and how to lose it – has become a modern-day obsession. But what’s the real deal for women who don’t have access to nutritionists, dietitians, trainers and nannies to help them shed the excess kilos?

“Every woman’s weight gain is different when they’re pregnant,” says Natasha Murray, accredited practising dietitian and spokesperson for the Dietitians Association of Australia. “Where the weight goes on varies from woman to woman and it’s the same with it coming off after the baby is born" Murray says it’s expected to still have a tummy when you leave the hospital, and for three to six months afterwards, especially if you’ve had abdominal separation, which happens to about two-thirds of all pregnant women. It’s also common for your breasts and body shape to change.

“Your hips widen to get the baby out, even if you have a caesarean. Your body releases a hormone called relaxin when you’re pregnant, which is why your hips widen and you become more flexible. So even if you return to your pre-baby weight, your jeans might not fit anymore,” says Murray.

Having babies in the 'real world'

If you’re finding it harder to lose weight post-baby than at any other time in your life, you’re not imagining things. In fact, a study published in the US journal Obstetrics & Gynecology found that, one year after giving birth, only 29.8 per cent of women were back in their normal weight range.

“The average weight gain during pregnancy is about 20kg,” says Melanie McGrice, accredited practising dietitian and author of The Pregnancy Weight Plan. This is more than most of us should be gaining. The recommended weight gain for a woman who is in the healthy BMI range (18-25) at conception is 11.5kg to 16kg – and it’s less if you are overweight to begin with. “But what we actually see is, the heavier a woman is at conception, the more she tends to gain during her pregnancy. So then it becomes very difficult to lose it after birth.”

The best advice, of course, is not to gain more than the recommended amount during pregnancy though McGrice says guidelines are rarely given to pregnant women. The reasons so many women struggle with their weight post-birth are multifaceted. Here are some of the issues and advice on how to tackle them.

Don't rely on the breastfeeding ‘diet’

People will tell you breastfeeding will help you drop baby weight – but it’s not a guarantee. During her first pregnancy, WW Coach Shellie-Ann Foster ate all the wrong foods. “I thought, ‘It’s okay, the weight will just fall off me when I breastfeed’,” she says. But, as with many women, it didn't work out that way. “I wasn't able to breastfeed my first. I had severe postnatal depression and I stacked on more weight than I’d gained during my pregnancy.”

Research does show breastfeeding can help new mums lose weight. “There’s a definite advantage in it,” says McGrice. “It burns kilojoules, but it’s also a time when many women turn to high-kilojoule convenience foods to boost energy levels.” The bottom line: breastfeeding is not a golden ticket to weight loss.

Meal prep when you can

If you don’t have nutritious meals that are quick to prepare, the haze of nappies, feeding and broken sleep takes over and your diet often takes a back seat. McGrice encourages pregnant women to put together an eating plan for the first few months and suggests cooking meals to put in the freezer. Foster now batch-cooks twice a week. “I make three meals at once: in the slow cooker, the oven and on the stovetop,” she says.

Murray advises mums to find times to meal prep that aren't always 5pm when the kids are hungry and you’re tired. “You might cook in the mornings when the kids are playing and heat it up later. Or, if you’re a night person, prep your veggies for the next day, and chop up some extra to have with dip as healthy snacks.”

The good news is it’s never too late to lose your baby weight, even if it’s after your third or fourth child and your weight has continuously crept up. Foster joined WW four months after her first baby was born and went on to lose 30kg. “It took 73 weeks. It wasn't fast, but I got there by continuously chipping away at my goal.” She went back on the program after each of her three children.

Even though celeb mums may have a helping hand from personal trainers and fulltime nannies, don’t despair if you don’t have the time or money for this. “It’s often hard for women to do much more than walking at first anyway, but if you can at least get into a routine of going for a walk every day with the kids, you’re on the right track,” says McGrice.

Murray stresses new mums must be gentle with themselves. “Yes, there are mums who go back to lifting weights or running marathons in six weeks, but it’s not the norm,” she says. In fact, while gentle exercise such as walking can generally be started as soon as you feel comfortable, you should always ask your doctor before starting, or restarting, an exercise program after giving birth. “Listen to your body, accept that it has changed, do some baby yoga or pram fitness classes and build up from there,” says Murray. “What mums do is amazing and you are a wonder woman for growing a person inside you.”

Jess Elliott “I tried to plan meals ahead and prepare when my baby slept. I made sure I had quick, easy snacks to hand – sitting down to bigger meals was hard.”

Leah Niewman “Six weeks after my second child was born I was back at my WW Workshops. It was great to get out of the house and the advice on planning healthy meals made life much easier.”

Kelly Lucas “I joined WW when my twins were four months. The Workshops were my ‘me’ time. I also joined a mums and bubs exercise class to help me lose weight and bond with my kids.”