Catherine lost the combined weight of her daughters and her husband lost 17kg too!

Catherine's journey to a healthier weight 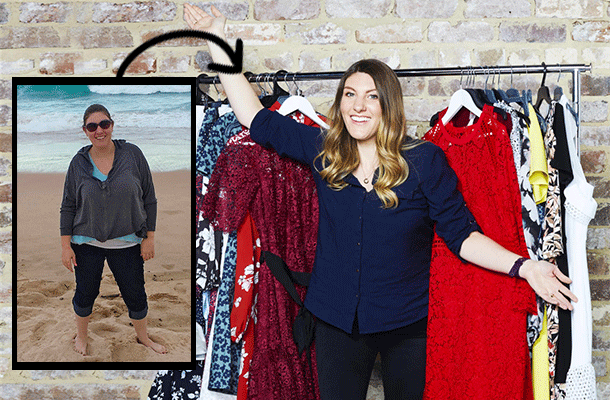 If I have a bad day, I get back on track that same day – the next meal.


Catherine McLaren would have laughed if someone had told that she could control her eating, haveenergy to burn and easily slip into a size 10 dress again, but now after 2 years on WW shes achieved goal and maintained her weight and eating habits. Back then she was an unhappy size 18. “My body confidence was shattered and I didn’t think it was possible to change. When I signed up to WW I wasn’t certain it would work, but now I know I’ve got this!”


Catherine, 32, needed help getting her life back on a healthy track after the birth of her second daughter Lily. Lily’s big sister, Amelia, was about to turn three, but Catherine felt tired and overwhelmed, and her weight was getting out of control. “I weighed 91kg when I had Amelia, but after Lily I got to 104kg,” Catherine says. “When I met my husband Andrew in 2007 I weighed 71kg and felt healthy and fit at that weight. But starting a new relationship, getting married, working full-time as a high school teacher then having the girls quite close together – the weight just crept up.”


Before joining WW in May 2016, she lost 14kg using meal replacement drinks. “It wasn’t easy and as soon as I stopped the meal replacements I put all the weight back on again.” Her breakthrough came when a friend told her about WW. “I had watched this friend steadily lose weight on the WW program and then manage to keep the weight off for more than two years. It was amazing how she had turned her life around, so I decided to give it a go myself and I joined up.”

Before going to her first WW Workshop Catherine had lost 3kg on the program, which gave her the confidence to keep going. “ That first Workshop was amazing. The WW Coach was so welcoming. We sat down together and talked at the end of the Workshop and I felt she got exactly where I was at. I knew I had found the support I so badly needed,” she says. Because she was still breastfeeding Lily, Catherine had 52 SmartPoints® to spend every day – something she found easy to do. “I couldn’t believe how much food I could eat and still lose weight!”


Before WW, Friday night dinner was usually a Thai meal or fast food, but takeaways are now a thing of the past for Catherine’s family. “We used to havetakeaway every single week without fail, but now we might have it once a month at the most. I really don’t miss it either.” Catherine started experimenting with new recipes. and including more protein and vegetables in her home-cooked meals. “Once we would have noodles almost every day because it was so convenient with two small children, but when I realised noodles used up about 16 SmartPoints, I decided to swap them for more healthy and filling alternatives. Now we are more likely to have lean meat or fish with veg and salads that are so delicious and colourful,” she says. 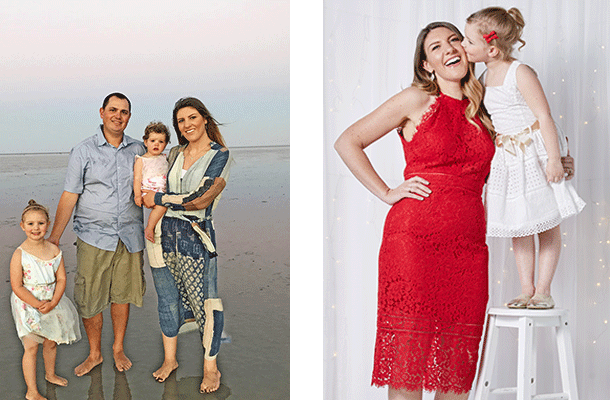 
As the weight melted away, so did the aching back which had Catherine pinned to the couch with a hot water bottle most nights. She started walking instead of driving to the local shops and keeping up with her three-year-old was no longer a problem. “ The girls do keep me busy, plus we live near a beautiful lake so we walk around that most days if the weather is fine. Amelia brings her bike and I push Lily in the pram. It is a 40-minute walk every day and it really made a big difference.” After going back to fulltime work earlier this year, Catherine joined a local Zumba class. “I never thought hardcore exercise was my thing and initially I felt so unfit and incapable of jumping around for an hour. But I’ve really surprised myself. I easily get through the Zumba classes now and love every minute of it. I’m thinking of doing two classes a week instead of just the one. I really do feel like the Energizer Bunny!”

Support from her man always


She says Andrew, 35, is his wife’s biggest supporter and fan. “We had a discussion before I joined WW and he knew how much I wanted to commit to it and make it work. Now he is quite shocked at how well I’m doing and how quickly the program worked for me. I’ve actually lost the weight of both my children put together, and the confidence that gives me is worth so much.” Andrew has even started on the program too and has lost 17kgs in 14 weeks! "I'm so proud of him and his achievements, he looks incredible and has so much energy". Having both of us following the program makes meal decisions easier and the food in the house a lot 'cleaner'/healthier. 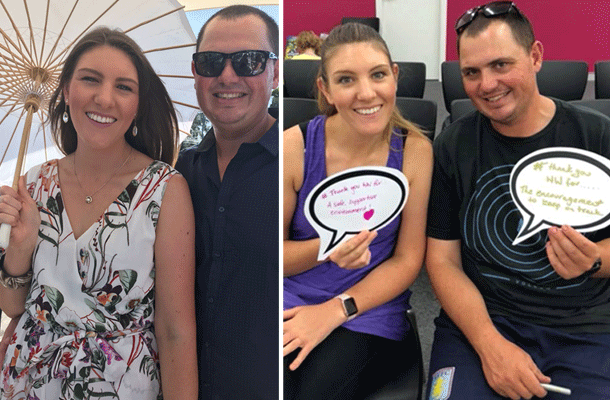 
"I am loving the program! It gives me much more flexibility on the 'hungry' days, there are no excuses for going hungry when you have so many ZeroPoint foods to choose from". Catherine is currently 3kgs from goal weight after recently gaining 3kgs back, something she describes as a 'bump' in her journey, after having less opportunity to move and having moments of giving in to temptation outside her points. But recognizing this and 'reigning it back in' she has getting back to goal in her sights! ". I’ve committed to refocusing and getting back to goal but it’s a process and I’m being patient!"

What I've learned on my journey


1. “I am in control of my health. Nobody can lose weight for me or force me to eat something I don’t want or need. In the end it comes down to me and the daily decisions I make about my own wellbeing.”

2. “I know I’m human and will slip up from time to time, but I have daily support with WW if I need it, which is really comforting. My WW Coach is fantastic and I love Connect – it’s full of life-changing stories every day.”
3. "The program is just something I can’t escape now! I am constantly asking myself if something ‘is worth it’ or if there is a better alternative. I also know when it’s time to ‘let my hair down’ and sometimes I enjoy dessert out and about or a cocktail without any guilt."

Afternoon snack: Cruskits with a spread or a WW bar & a cup of tea.

Dinner: Meat, vegies and a carb side like pearl couscous or baked potato and sweet potato.

Dessert: If there are points to spare I eat them! Greek yoghurt and fruit or Nana's waffles with low-fat ice cream and strawberries. I’ve always had a big appetite and I love that I can eat substantial meals on WW!