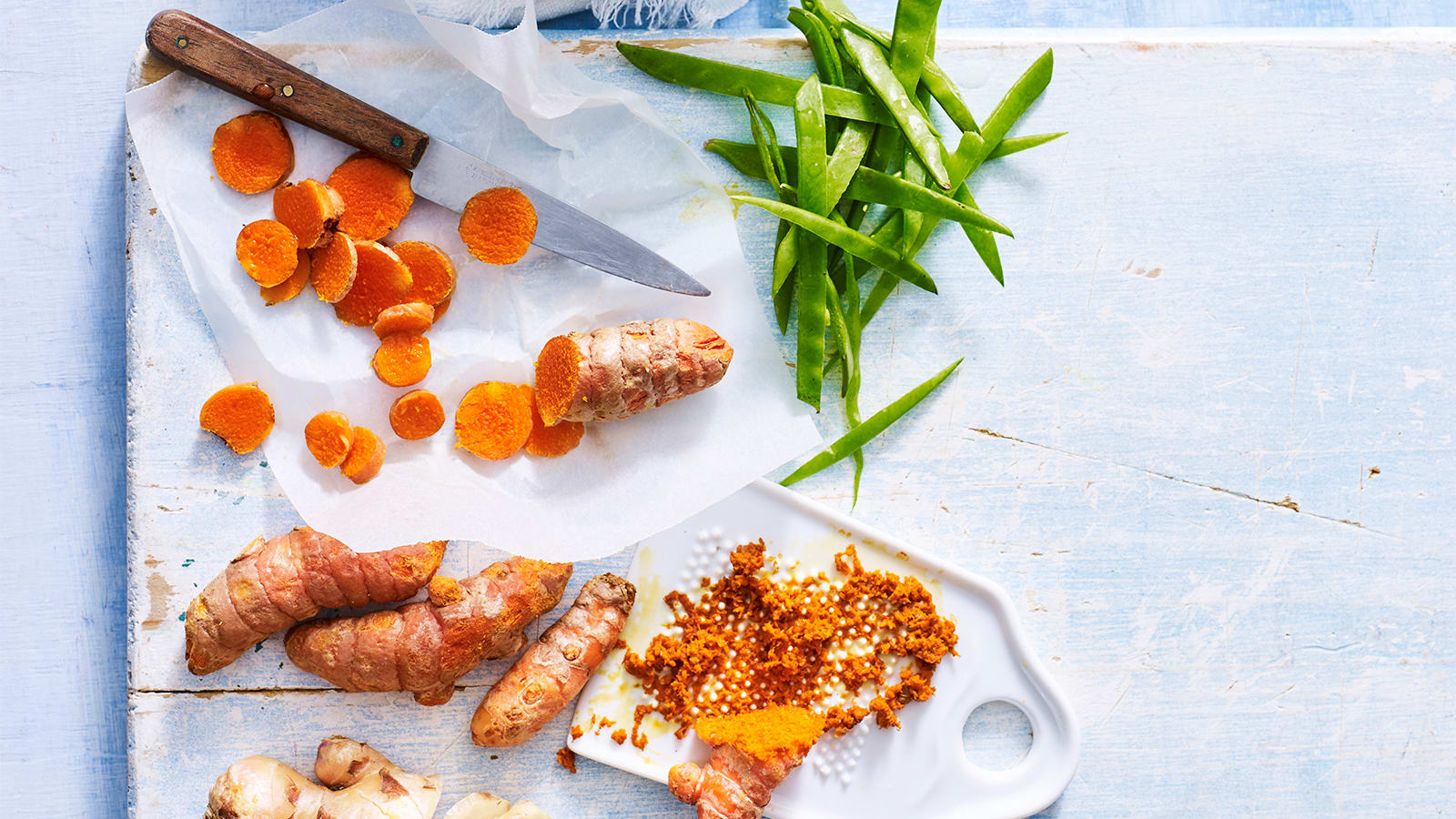 7 benefits of turmeric, according to scientists

Is turmeric good for you? Read to find out if the health benefits of turmeric are fact or fiction.

Whether you’ve seen it at your supermarket, on a coffee shop’s latte menu, or in the social media feed of a wellness influencer, it can be difficult to suss out the actual benefits of turmeric, a spice made from the stems and roots of the tropical plant Curcuma longa Linne. Although it claims to treat everything from inflammation to arthritis and hypoglycemia—and even protect against degenerative brain diseases and cancer, human studies on the health effects of turmeric and its active chemical compound, curcumin, are quite limited, says Dr. Victoria J. Drake, PhD, manager of the Micronutrient Information Center at Oregon State University.

Because more randomised controlled trials are needed to determine whether turmeric might have real value in disease prevention or treatment, it’s a good idea to approach all claims with caution. Still interested in turmeric’s alleged superpowers? Read on to find out everything you need to know about it:

Used for centuries throughout India to add colour and flavour to dishes and treat a variety of diseases, turmeric, which is a member of the ginger family, is known for its bright orange colour, a product of fat-soluble pigments called curcuminoids. Curcumin is the principal curcuminoid in turmeric; it’s often extracted and studied on its own for its anti-inflammatory qualities. Because curcumin comes from turmeric, the two names are often used interchangeably.

Turmeric and curcumin itself are both sold in supplement form. While there have been numerous studies on each, turmeric contains other natural components—like essential oils— that may have specific health benefits.

Commonly used in Ayurvedic medicine, a holistic medical system that dates back to ancient India, turmeric is now used in supplement form to treat various maladies. But does it actually help? Here’s what the science says about the most common claims:

The facts: When a randomised group of 117 adults diagnosed with metabolic syndrome (a group of risk factors for heart disease) took about one gram of curcumin daily for eight weeks, they surfaced with lower levels of the proteins that contribute to inflammation, according to a 2016 controlled trial published in the journal Biomedicine and Pharmacotherapy. Curcumin appears to reduce inflammation in the body by suppressing a key protein in the inflammatory process, says Dr. Yufang Lin, MD, an integrative medicine specialist at Cleveland Clinic. That’s a good thing, considering chronic inflammation can contribute to an increase in cortisol, the body’s main stress hormone; break down muscle mass; raise your risk of diabetes and cancer; and elevate your triglycerides, a type of fat found in the blood that contributes to heart disease. That said, you should always consult a doctor before taking up a new supplement routine.

Claim 2: It has antioxidant properties

The facts: Curcumin supplements appear to help suppress oxidative stress, or cell damage that occurs when the human body has an overabundance of free radicals (harmful, unpaired oxygen electrons) and not enough antioxidants (molecules that neutralise those unpaired electrons), according to a 2015 review and meta-analysis of seven studies published in the Journal of Functional Foods. While these findings are promising, larger studies are still needed for validation and to understand which diseases are caused by oxidative stress.

The facts: When 40 adults with healthy brains took 90 mg of Theracurmin, a type of curcumin that is readily absorbed, twice a day for 18 months, their memories and ability to pay attention improved, according to a 2018 study published in The American Journal of Geriactric Psychiatry. The study authors speculate that curcumin’s anti-inflammatory benefits helped reduce plaque in areas of the brain related to mood and memory, but more research on a larger sample size is needed to confirm the findings.

Curcumin has also been shown to help maintain normal structure and functions of the brain, reducing the risk of Alzheimer’s disease, according to a 2018 research review published in the journal Neural Regeneration Research. Taken together, these two research sets show promise around turmeric and curcumin’s ability to help protect the brain, but again, definitive conclusions have yet to be made.

As encouraging as these articles are, there’s a caveat: Most of the studies they reference involve animals, not humans; it’s hard to say definitively how curcumin may affect cancer cells in people, according to another review article published in Current Research: Integrative Medicine in 2018.

Claim 5: It improves the blood sugar response of people diagnosed with diabetes

The facts: Supplementing with curcumin may trigger an enzyme in the liver that facilitates glucose metabolism, thereby helping control the blood sugar of people dealing with pre-diabetes or type 2 diabetes, according to a 2019 review focused on patients in Asia published in PLOS One.

What’s more, because of curcumin's ability to fight back against oxidative stress (which can contribute to diabetes) and help regulate fat metabolism (which may provoke imparied glucose response), curcumin supplements could therapeutic benefits for people diagnosed with type 2 diabetes, according to a 2019 literature review published in the journal Nutrients. However, researchers caution that more studies focused on varied populations and specific dosages are needed and caution that individual contributing factors (like health issues and/or medications) should be considered before doctors start recommending curcumin supplements in a clinical setting.

The facts: Taking turmeric or curcumin for more than 12 weeks may create a modest improvement in systolic blood pressure, according to a 2019 meta-analysis of 11 studies comprised of 700 adults who were either healthy or diagnosed with diabetes, metabolic syndrome, obesity, or kidney disease. Because chronically high blood pressure can increase your risk of cardiovascular disease and stroke, the benefits of turmeric could be impactful—but the authors of this analysis caution that because it included two different kinds of supplements (turmeric and curcumin itself), at varying doses (between 150 and 2400 mg per day), for fluctuating lengths of time, it's hard to pinpoint the magic combination. In other words, no one should consider substituting their blood pressure medication for turmeric just yet.

The facts: Turmeric supplements can reduce inflammation, which in turn can help reduce pain linked to arthritis, says Dr. Rachel Carlton Abrams. While there’s also been a good deal of both human and animal studies on turmeric/curcumin’s effect on the pain, stiffness, and other symptoms of osteoarthritis, a common type of progressive arthritis caused by joint inflammation that's common among older adults, you shouldn’t forgo traditional pain meds for turmeric or curcumin without talking to your doctor until more research is done.

Turmeric has been linked to improved insulin sensitivity, or the body's ability to sop up blood sugar effectively. In turn, this helps prevent you from gaining excess stomach fat—and may even help you lose it, according to Dr. Abrams. It could be why adults with metabolic syndrome (a group of conditions like high blood sugar, increased blood pressure, body fat around the waist, and high cholesterol) saw reductions in body mass index (BMI), waist circumference, and leptin (a hormone that regulates body fat) after taking curcumin supplements for as few as four or up to 36 weeks, according to a 2019 review of 18 articles published in Frontiers in Pharmacology. Although these results are promising, the jury is out on how much turmeric you’d have to take, and for exactly how long, to actually see results on the scale.

How to use turmeric

Turmeric is poorly absorbed by the gut. To help your body extract its benefits, combine the spice (or supplement) with black pepper and dietary fat, which aid in absorption, Dr. Lin says. Whether you enjoy the taste of this slightly peppery, earthy spice, or simply want to reap its benefits, here are a few easy ways to consume it:

Turmeric is the dominant spice in curry (and the ingredient responsible for its golden colour), but you can also add turmeric to soups, stews, and stir-fries. If you’re unfamiliar with it, start with one to two teaspoons for colour and taste using recipes. You can start with some of our recipes above.

Walk into any health food or supermarket, and you’re likely to see turmeric supplements lining the shelves. Whichever brand you choose, try to find one that includes Bioperine® (the trademarked name of piperine, an active ingredient in black pepper that increases the bioavailability of other compounds such as turmeric) and take it with a fat source like olive oil, or as part of a full meal, as Dr. Lin advises—that is, after talking to your doctor about the dose that’s safe for you.

While there isn’t much scientific evidence around the potency of turmeric tea, Dr. Abrams says it’s likely to be absorbed better than a supplement. Golden milk, a beverage that’s typically made with turmeric, coconut milk, a pinch of black pepper, and honey to taste, is another tasty way to drink your turmeric.

Side effects of turmeric

Although turmeric is a natural food that’s generally regarded as safe when taken at the doctor-recommended dosage that's right for you, there are some side effects to consider before adding it into your diet:

The upshot: Is turmeric good for you?

The breadth of research around the health benefits of turmeric and curcumin makes the ingredient look pretty good. And yet? Most experts agree that more large-scale, dose-specific human studies are needed before self-prescribing. If you're considering adding the ingredient to your diet, talk to your doctor—especially if you’re on medication to avoid potentially dangerous interactions.

At the end of the day, if you’re truly focused on becoming your healthiest self, consuming a varied diet that’s high in fruit, vegetables, and whole grains is generally regarded as the best approach—no supplements needed.

9 superfoods you should be eating